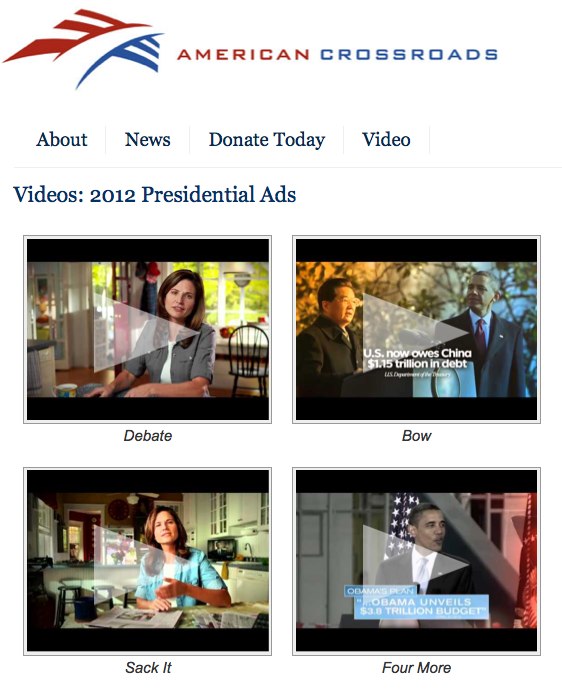 American Crossroads, the super PAC whose success in the 2010 elections heralded a new era in big money in politics, came nowhere close to matching that performance in 2012. Of the 30 largest outside spending groups that backed more than one candidate in the general election, it had the second lowest return on investment in the races in which it intervened.

Despite having the second largest pool of money to play with among super PACs–it spent $104.7 million (only Restore Our Future, the organization backing Mitt Romney, spent more), in race after race it bet on the losing side, with the lone exception of former Sen. Bob Kerrey, who sought to reclaim a spot in the Senate he'd left in 2001.

American Crossroads fared so poorly for three reasons: First, the PAC risked a huge sum for a huge payoff–defeating President Barack Obama–but the Romney campaign and its surrogates came up short. Second, it spent heavily on Senate contests in battleground states where the Obama campaign mounted ad blitzes and a hugely successful get-out-the-vote operation. And third, because American Crossroads did not to intervene in primaries–perhaps not wanting to alienate the Tea Party faithful–it had weaker candidates to support in the general election.

You can’t have an honest conversation about the impact of outside groups without looking first at the gargantuan monetary advantage Obama enjoyed over Romney on the TV airwaves throughout the campaign. Obama outspent Romney on television ads by $30 million in Ohio, $27 million in Florida, $21 million in Virginia, and $16 million in New Hampshire – four states Obama carried by a total of only 340,000 votes, and which had they switched would have swung the election to Romney. In some cases that’s the equivalent of five to six weeks of unanswered television ads in those markets.

And these dramatic disparities understate Obama’s advantage because Romney was purchasing airtime week to week at the end of the campaign, and not reserving time back in the summer when rates were sometimes two-to-three times less expensive. Outside groups helped to level those disparities out and kept the race close, but it was not enough. Obama leveraged the financial power of his incumbency and its four long years to build a financial and grassroots campaign that ended up just overpowering Mitt Romney.

The Presidential Contest: All told, American Crossroads spent $91.1 million to win the White House for GOP candidate Mitt Romney. Despite polls showing that most of the public knew little about GOP nominee in June 2012 and early indications from Democratic strategists that the Obama campaign would attack Romney's character and record at Bain Capital, American Crossroads spent just $6.5 million on positive ads about the Republican nominee. All but $47,500 was spent during the last five weeks of the election.

In contrast, Restore Our Future, the super PAC that supported Romney, spent $4 million in May and another $7.2 million at the end of July to run positive ads about Romney, which was still a drop in the bucket compared to the $88.6 million the group spent attacking Obama. American Crossroads showed a similar disparity: the bulk of its spending on the presidential contest–some $84.6 million–went for ads attacking Obama. In a replay of the 2004 election, when GOP and outside group attack ads against Democratic candidate John Kerry went unanswered, that left the field open to the Obama campaign and its surrogates to define Mitt Romney.

According to figures from Kantar Media obtained by the Washington Post, the Obama campaign spent $333 million on more than 562,000 ads–82 percent of which attacked Romney. Team Romney, by contrast, spent $147 million on more than 223,000 ads. Some 91 percent of Romney's ads were negative. And in October, the Wesleyan Media Project, which tracks spending on political ads, concluded that the Obama campaign consistently aired more ads than the Romney campaign and its independent surrogates like American Crossroads while spending less for those ads.

Battleground States: In addition to the presidential contest, American Crossroads sought to deliver Republicans a majority in the Senate, and concentrated its spending on candidates running in three battleground states–Florida, Virginia and Wisconsin–where its combined spending totaled $7.4 million. All three states had increased voter turnout compared to 2008, according to Nate Silver of the New York Times, and in the presidential contest, all three were won by Obama.

Senate winners ran ahead of Obama in contests in both Virginia, where American Crossroads spent more than $728,000, and in Florida. In the contest between former governors Tim Kaine and George Allen, the former won more than 2 million votes–about 40,000 more than President Obama, who bested Mitt Romney by a 4 percent margin.

In the battle for the Sunshine State, American Crossroads spent $4 million–more than in any other congressional contest–to defeat Sen. Bill Nelson. The incumbent garnered 4.5 million votes, about 350,000 more than Obama did, cruising to an easy victory or Rep. Connie Mack, a candidate with a troubled past but endorsements from the GOP establishment.

Primary Indifference: If Mack was a problematic candidate, others proved to have electoral death wishes. In Missouri, American Crossroads spent more than $64,000 attacking Sen. Claire McCaskill, a candidate beset with ethics problems running in a state where her vote for the Patient Protection and Affordable Care Act–Obamacare–seemed at odds with an electorate that overwhelmingly voted for a state measure that aims to invalidate the law's requirement that individuals purchase insurance or pay a fine.

But challenger Todd Akin self-destructed in August when he asserted that it is impossible for pregnancy to result from "legitimate rape." After the comments, Republicans urged Akin to withdraw from the race. For McCaskill, who aided Akin in his three-way primary by running ads attacking him as the real conservative, the race was never again in doubt. The $64,000 American Crossroads spent, which came in September, long after Akin's remarks, was lowest amount for any Senate race in which it intervened.

While McCaskill's campaign spent in the primary to get the opponent she thought easiest to beat, American Crossroads continued its policy of not intervening in Republican primaries. In 2010, two weak candidates in Nevada (Sharron Angle) and Delaware (Christine O'Donnell) won in part on the strength of outside spending by other groups. And in 2012, both Akin and Richard Mourdock in Indiana, who defeated long-term incumbent Richard Lugar in the primary, won their nominations with the help of outside spending. Like Akin, Mourdock damaged his campaign with a remark about rape and lost to Rep. Joe Donnelly. American Crossroads spent $1.38 million on ads attacking Donnelly.

Silver Lining: Not all the spending was in vain. In races in non-battleground states that had Republican challengers whose views of rape didn't alienate the electorate, American Crossroads' went one out of three. They failed to unseat Sen. Jon Tester of Montana or to elect Rep. Heather Wilson in New Mexico, but Nebraska voters opted for Deb Fischer over Kerrey, giving American Crossroads its sole Senate victory of 2012.