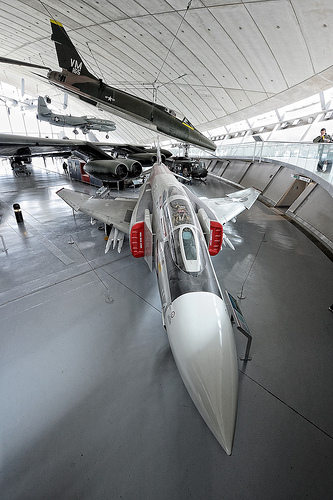 The planned delivery of 20 Lockheed Martin F-16 fighter planes to Egypt is the perfect symbol of iron triangles at work–special interests and their lobbyists, federal agencies and the lawmakers who fund them.

But in the years since President Dwight Eisenhower delivered his warning about the inertia of defense contracts in 1961, the lobbying has only grown more sophisticated.

The U.S. government gives Egypt foreign aid, which it uses to buy U.S. military hardware. Lobbyists for the Egyptian government and Lockheed Martin (they both used the same firm) arranged meetings between the buyer and the seller, between representatives of Egypt's military and the Defense Department and key members of Congress who provided Egypt with the U.S. taxpayer dollars–some $213 million–to pay for the planes.

The government of long serving President Hosni Mubarak agreed to purchase the planes from Lockheed in 2010. In the two months before Lockheed Martin announced the deal, lobbyists for Egypt had 46 contacts with government officials, including a dozen with high ranking officials in the Pentagon and 11 with State Department officials.

In less than a year, the Arab Spring protests drove Mubarak from power. The shift to military caretaker government to the election of Mohamad Morsi–the Muslim Brotherhood leader whose rule has also drawn protests– did not derail the deal or lead to a change in the package of foreign aid the United States provides.

Egypt is the second biggest recipient of aid thanks to the historic Camp David Accords, when President Jimmy Carter brokered a peace deal, part of which involved a huge, ongoing U.S. support for both Israel and Egypt. According to ForeignAssistance.gov, the federal government plans to pay Egypt $1.56 billion in foreign aid this year. More than 80 percent of the aid comes in the form of “Peace and Security” appropriations.

The Washington lobbying of Egypt preceding the deal, as found on Sunlight's Foreign Lobbying Influence Tracker, was intense. Cairo's team, then working for the Mubarak regime, included Toby Moffett, a former member of Congress from Connecticut, and Robert Livingston, the former chairman of the House Appropriations Committee.  The pair arranged meetings with key legislators who oversaw foreign aid packages, including Rep. Rosa DeLauro, D-Conn., and Nita Lowey, D-N.Y., both of whom who serve on the Appropriations Committee. The lobbyists also met with military contacts US Central Command Officers.

In 2008, lobbyists for Egypt made over 1,000 contacts with government officials, according to disclosures filed with the Justice Department under the Foreign Agent Registration Act, including Rep. Ileana Ros-Lehtinen, R-Fla., who is now the chair of the House Foreign Affairs Committee and who opposes extending aid to Egpyt's new leaders. “Now the Obama Administration wants to simply throw money at an Egyptian government that the President cannot even clearly state is an ally of the United States,” she said in a statement.

A change in the country's lobbying posture followed the change in government. Egypt continued their contract with the PLM Group–a combine of three highly connected Washington lobbying firms–after the transition to military rule, but terminated their lobbying relationship in January of 2012. Since Mubarak stepped down in 2011, Egypt ended its contracts with Qorvis, Chlopak, Leonard, Schechter and Assoc. Inc. and PLM Group (which includes the Podesta Group, the Livingston Group, and the Moffett Group under its umbrella). PLM received $759,000 from Egypt in 2009, according to the Justice Department’s semiannual reports to Congress.

But the fuel feeding this deal is far from dead, as defense contractors, poised to be squeezed by budget cuts in the Defense budget, continue to lobby for foreign aid programs that allow them to sell their wares overseas.

Lockheed Martin has disclosed spending $156 million on all lobbying since 1999, according to Influence Explorer. Its in-house lobbying operation has mentioned Egypt and Pakistan’s foreign aid packages in their lobbying disclosure statements in 2007. The defense giant has the Podesta Group under contract, and employed the Livingston Group until 2006 to represent them, in addition to other firms and their own stable of in-house lobbyists.

The Egyptians purchased the planes through a program called “Peace Vector.”  The Egyptian government has obtained 240 of these planes since 1980, according to Lockheed Martin.