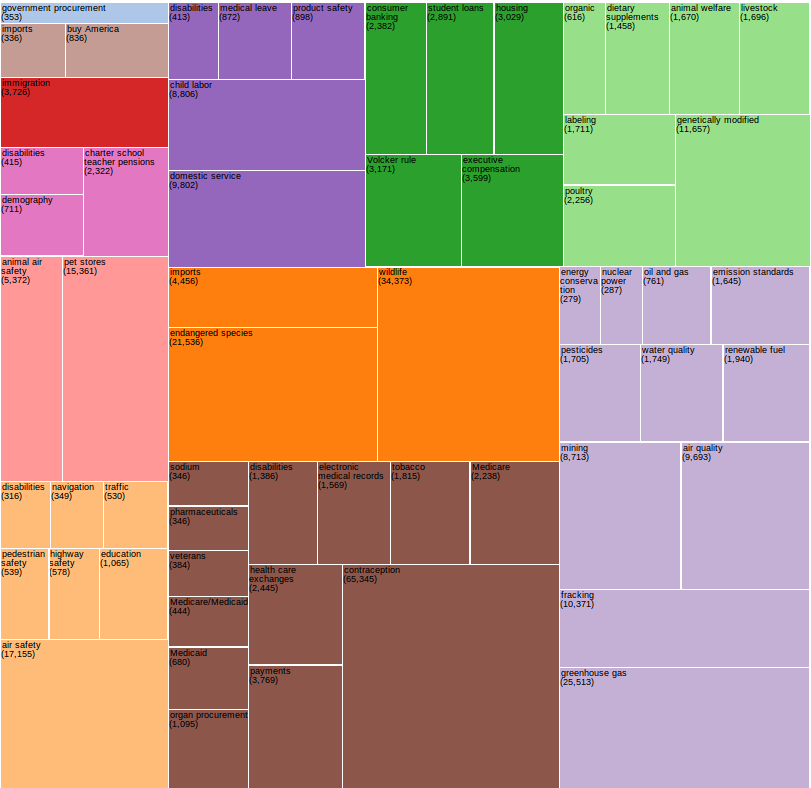 Food is something that affects everyone. Yet during the next two months, while the comment period was open, the agency received four comments on the proposal. One came from the Can Manufacturers Institute, a trade association which strives to be the “voice of the metal can making industry.” Two came from companies working in the food container industry, and one came from a farmer who had read about the proposal in a U.S. Department of Agricuture newsletter.

Welcome to the world of government regulation. Every year, government agencies solicit public comment on thousands of rules that determine how laws passed by Congress are implemented. Any interested member of the public can make known his or her opinion on a federal rule-making process. But with the exception of high-profile issues with well organized constituencies, such as contraceptives or wildlife protection, very few regulations draw much attention from the public.

Instead, dockets are dominated by industry groups representing companies affected by the regulations.This year, 89 percent of the regulations that drew at least one comment received 100 or fewer, according to Sunlight's Docket Wrench tool, now in development. It's based on regulations available through regulations.gov, the government's one-stop hub for information about the regulatory process. Only 102 regulatory proposals drew 1,000 comments or more. Click on the image above for an interactive tree map of government regulations that allows you to see which ones got the most comments.

Indeed, if legislation is the sausage-making of government, then regulation writing is more like a cassoulet. There’s less rough and tumble, but it is still complicated, messy, and tends to feature a more technical, rarified ingredient list. And you won't see it sold at ball parks.

Some of this is for technical reasons. After all, most people do not have the time to check the Federal Register to see if there is a regulation affecting them. New Internet tools, however, can make the rulemaking process more accessible.

MORE: Follow regulations of interest to you with Sunlight's Scout.

Overall, the regulations that made the top 100 list for comments were dominated by health and environmental concerns, as well as transportation, food supply, and transportation [see chart.]

One important caveat: financial issues are underrepresented. Several major financial agencies, such as the Securities and Exchange Commission, the Commodity Futures Trading Corporation (CFTC), and the Fed, do not participate in regulations.gov. WIth nearly 400 required rulemakings, the Dodd-Frank financial law has been a focal point of agency rulemaking this year. A number of these regulations have proved quite controversial, drawing thousands of comments, such as the CFTC's rule on position limits, which drew some 13,000 comments. And it's not just financial issues. The Federal Communications Commission (FCC) and the Federal Elections Commission are two other examples of a non-participating agencies.

Sunlight’s analysis shows that the regulation that got the most comments last year, with more than 63,000 people weighing in, involved contraceptive benefits under the Affordable Care Act. Most came in over the summer, as the presidential campaign was at its height and the issue became a flash point in the campaign between GOP nominee Mitt Romney and President Barack Obama.

The majority of commenters were opposed on religious grounds to any offering of contraceptives through the new health care laws. A Google search of one of the most commonly used phrases, "Both the coercive mandate itself, and its extremely narrow exemption for "religious employers," remain unchanged," shows origins in an action alert sent by the National Committee for a Human Life Ammendment, a group that works closely with the U.S. Conference of Catholic Bishops. The alert was reprinted in newsletters by many individual Catholic parishes. The administration is still in the middle of revising these rules.

No other regulation came close in drawing public attention. The next most-commented-upon regulation concerned an international wildlife treaty. More than 34,000 people wrote to the Fish and Wildlife Service, a bureau within the Department of the Interior. According to Sunlight's clustering tool, nearly all of these letters, which arrived over the summer, contained language urging the administration to push for polar bear protection as part of upcoming negotiations on the Convention on International Trade in Endangered Species.

The action alert that inspired the rush of comments is this draft letter by the Natural Resources Defense Council (NRDC), an environmental group, which suggests that activists urge the government to "advance a worldwide ban on the commercial trade of polar bear parts," and criticizes Canada for allowing the hunting of some polar bears.  In October, the United States, along with Russia, proposed the polar bear parts ban as part of the treaty negotiations. The meeting will take place in March 2013.

Recreational airline pilots were the inspiration for the third-most commented regulation this year, a petition to allow some exemption from a requirement they must obatin Federal Aviation Administration (FAA) issued medical certificates. The petition was drafted by the Aircraft Owners and Pilots Association (AOPA) and the Experimental Aircraft Assocciation (EAA), two trade associations representing recreational fliers. The groups argue that through certain education requirements, there would be "an equivalent lefel of safety, and in practice, stands to provide a greater level of safety."

"Aviators are a very passionate group and there’s not other place in the world for general aviation like the U.S.," said Katie Pribyl, vice president of communicaitons for the AOPA, in an interview with Sunlight. "We’re so proud when we do ask for help and ask them to engage they jump to the quick and always exceed our expectations.” The group said that the FAA had not yet acted on the petition.

"It's not uncommon to see a few controversial rules get a lot of comments. But I think one thing that you often see are industry groups and trade associations that have the resources to continuously monitor the new rules. It's not uncommon for them to be the only commenters," says Katie Greenshaw, regulatory policy analyst for OMB Watch, a nonprofit group that works for open government.

Not all Washington experts see this necessarily as a problem. James Gattuso, a senior fellow in regulatory policy at the Heritage Foundation, a conservative organization that criticizes the proliferation and cost of government regulation, says that it's not the number of comments that matters but rather their substance.

"Rule making comments are different than the legislative process. It's not a matter of getting the biggest number of emails," said Gattuso. "Regulators are looking for actual information that can inform decion making. That can be from industry, the people affected, academics, or other experts in the field, but the pure number of comments doesn't tell you a whole lot whether the process is working or not."

In the case of the proposed regulation on food container standards that drew just four comments, Chris Waldrop, director of food policy for the Consumer Federation of America, said that it had to do largely with an update of industry standards without a big effect on consumers.

"Consumer groups don't have the same sort of resources as companies that can hire lawyers to write comments covering a whole range of issues," said Waldrop. "We don't have the staff so we have to prioritize."

Federal regulations receiving most comments in 2012