Fresh off taking the oath of office earlier today, the new members of the House of Representatives are about to vote to adopt a set of rules and orders this afternoon. There are a few ethics-related changes that are significant. There are also some unusual new wrinkles.

One welcome change for watchdog groups, including the Sunlight Foundation, is the continuation of the independent Office of Congressional Ethics, which has to be reauthorized by each Congress. The terms of four board members — Yvonne Burke, Jay Eagen, Karan English and Allison Hayward — expired at the end of the last Congress but the rules solved that by striking term limits.

SUNLIGHT'S VIEW: What the House left out. 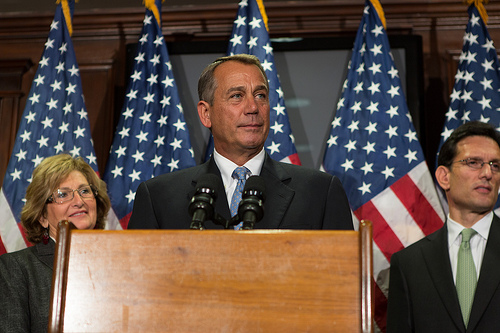 Another is that protections against nepotism were enhanced. Now, a lawmaker will not be able to hire a relative; beforehand, a spouse could not be hired. But the rule does not apply to relatives who already work for members – only new hires.

There is also a new allowance for lawmakers who want to pay for flights using campaign or official funds. They were already allowed to use the funds to pay for commercial flights or a friend’s aircraft, as well as in other situations. But now the lawmakers can apply for a waiver from the House Ethics Committee to use official or campaign funds for a flight in a specific situation.

Also written into the rules resolution is something that has been in place for years now – the ban on former members who are registered lobbyists from using Congress’s gym. That ban doesn’t include shadow lobbyists: Government relations executives that direct other lobbyists but are not technically registered to lobby. So the likes of former Sens. Chris Dodd, D-Conn., who heads the Motion Picture Association of America, and Tom Daschle, D-S.D., who works at DLA Piper — both of whom served in the House before moving across the Capitol — can still use the facilities. So can former House Speaker Newt Gingrich, whose role as an "unlobbyist" became an issue in his unsuccessful 2012 campaign for the presidency.

Then there are also some strange non-ethics related changes in the rules package. The House is attempting an end-around of an aspect of the 2010 health care overhaul that Republicans despise: the Independent Payment Advisory Board, which is tasked with finding Medicare savings. The health care law says House must consider an IPAB proposal on the day it is sent to the chamber. But the House’s new rule, which could face a legal challenge, say it won’t comply with that.

Also in its first day, the Republican-dominated House will vote to continue two initatives that are anathema to Democrats by renewing the authority of: