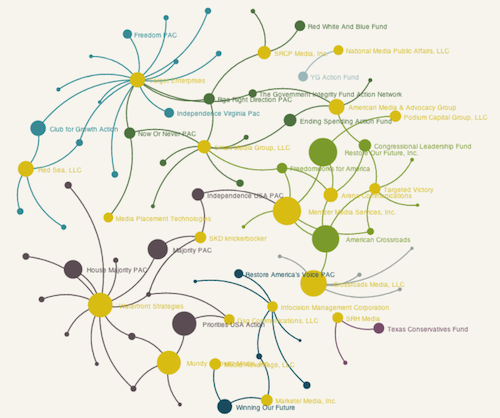 In the three years since the Supreme Court's Jan. 21, 2010 ruling in Citizens United, the super PACs that the decision helped spawn have largely been seen as advertising machines. But an anniversary-eve analysis by the Sunlight Foundation show that they have created a class of super consultants.

Of the $620 million that super PACs doled out during the 2012 campaign cycle, records filed with the Federal Election Commission as of Dec. 6 reveal that 80 percent was spent through just 20 consulting firms. As the graphic above illustrates, a tightly interwoven network of Washington insiders reaped the biggest benefits of Citizens United and subsequent decisions that gave rise to a new class of outsider-insiders who have become a new political establishment.

While the biggest chunk of super PAC money went for ads — meaning that local and cable television stations and radio stations ultimately received the bulk of the money, while the firms buying the ads kept a percentage for their trouble — political consultants also produced ads and ran direct mail and robocall operations, among other activities. Our analysis showed how far the groups delved into other political endeavors with significant payrolls and overhead. Though these media and consulting strategists operate outside the traditional party and campaign structure, they are emulating the operations and structure of political campaigns, in effect acting as shadow campaigns.

Top 20 consultants that got the most business

Some $244 million of the super PAC money went to expenses such as salaries, event expenses, travel, fundraising and donations to other super PACs. Only 170 of the 1,400-odd super PACS spent 50 percent or more of their money on independent expenditures and other electioneering to influence the voters.

(Categories for some $1.49 million could not could not be accurately identified because of lack of disclosure.)

An expensive election has always meant fat paychecks for consultants. In the era of super PACs, however, it also creates opportunities for campaign insiders to become outsiders, raising money in huge chunks while raising the question of how independent super PACs are from political campaigns.

Consider Podium Capital Group, which served as Restore Our Future’s flagship fundraising machine. Steve Roche, a top fundraiser for the Romney campaign, left it in 2011 to raise money for the super PAC that supported Romney. He did so through Podium Capital, a limited liability corporation registered in Delaware, which took in more than $6.55 million in 2012 election cycle. The company seems to have worked exclusively for the super PAC supporting Romney, FEC records show. Roche has another firm, SCR and Associates; in addition to his work for Restore Our Future, he served as a national finance chair to the unsuccessful 2012 campaign of Sen. Scott Brown, R-Mass.

Other consultants have expanded their client portfolios by working for super PACs. Both the House Majority PAC and the Majority PAC, two Democratic super PACs formed to ensure that Democrats were elected to the House and Senate, respectively, hired Waterfront Strategies, a firm located in the same building as GMMB, the media consulting group that manages President Obama’s ads. Waterfront, which is incorporated in Delaware, is a part of GMMB and lists Raelynn Olson as president. Olsen is also on GMMB’s payroll. Among the latter firm's partners is Jim Margolis, senior advisor to Obama’s re-election campaign who, as their website says, “represents more Democratic Senators than any other consultant in the nation.” Super PACs reported paying Waterfront Strategies more than $67 million.

Srcp Media, Inc., a Republican shop that has been around for nearly two decades now and specializes in campaign strategy and advertising, worked for Red, White and Blue, the super PAC that supported Rick Santorum in his presidential bid, and the Republican Governor’s Association Right Direction PAC. The company earned more than $10 million. RGA Right Direction made no independent expenditures; its reports with the FEC show that it spent most of its money on surveys.

A web of influencers

Viewing the transactions between super PACs and the super consultants as a network reveals several interesting patterns in the political landscape. (Clicking on the image of the consulting networks above will take you to an interactive version of the graphic.) The Democratic organizations are members of the same community centered around only four of the top 20 consulting firms: Waterfront Strategies, Mundy Katowitz Media, Inc., GSG Communications, LLC., and SDK Knickerbocker. Conservative super PACs, on the other hand, appear to be much more fractured, with multiple distinct clusters orbiting consultancies. In fact, several clusters of conservative super PACs, like the Gulf Coast conservatives and those contracting with Infocision and Marketel Media, are wholly unconnected from the larger GOP network: these groups share no consultants with anyone outside their community.

On the other hand, the Democratic cluster is connected to the large conservative component by one super PAC, which contracted with both SDK Knickerbocker and Mentzer Media Services. Interestingly, this was Independence USA PAC, the organization started by New York City Mayor Michael Bloomberg, a Republican turned independent. His PAC advanced candidates devoted to his issues: gun control, education reform and gay rights. Independence USA serves as a ‘bridge’ between these two otherwise ideologically segregated clusters.

Among the Republican clusters, there appear to be two distinct ideological communities, which draw from different sets of consultants. In the upper left portion of the visualization the teal-colored community – clients of Target Enterprises and Red Sea, LLC – is comprised of Tea Party and anti-tax organizations, while the light green cluster, around Arena Communications, Mentzer Media and Targeted Victory, is comprised of the large and powerful Republican Party establishment organizations.  The super PACs in the dark green cluster, many of which are more locally-focused or non-federal level organizations, perform a bridging function between these two distinct communities. Smart Media Group, the central consultancy within this cluster, appears to have a foot in both the anti-establishment Tea Party right and the Republican establishment, drawing clients contract with consultancies embedded in both communities.

Spending on overhead and fundraising

American Bridge 21st Century, the left-leaning super PAC, is one such example. The organization spent $7.73 million of the $12 million it raised on salaries, rent and overhead, and for good reason. Started by conservative-turned-liberal activist David Brock, the group specialized in opposition research–digging into the backgrounds of candidates that the group opposed. Direct expenditures from this super PAC was as low as $332,990, despite the group being one of the bigger fundraisers among the left leaning groups.

SEIU’s super PAC Workers’ Voice spent about 40 percent of its total contributions in the 2012 cycle on overhead costs and salaries for the foot soldiers.

Like campaigns, super PACs had well-oiled fundraising operations, and disclosed spending a cumulative $33 million on raising money. While the major super PACs such as Restore Our Future and House Majority PAC spent a couple of millions on fundraising activities–a small portion of their overall expenditures–for a few groups, including Restore America’s Voice and Super PAC for America, the bulk of their money (89 percent and 40 percent, respectively), was spent to raise more money.

Founded by sometime Democrat and sometime Republican political operative Dick Morris, Super PAC for America's biggest recipient of funds was Newsmax Media, the conservative website run by Christopher Ruddy and based out of West Palm Beach, Fla. The super PAC received more than $4.5 million in donations and bought ads worth $1.5 million attacking President Barack Obama. Super PAC for America spent a much larger chunk of their money on Newsmax for fundraising purposes. Morris uses Newsmax to sell space on his email bulletins to advertisers.

There are few restrictions on how super PACs can spend their money–and many have millions left in the bank after the 2012 campaign. Except for contributing money to federal candidates and committees, super PACs are free to spend the millions they have left over in any way they see fit. Neither FEC laws nor Internal Revenue Service regulations stop the individuals running super PACs from using the money to write themselves hefty checks or even buy themselves a yacht.

Take Winning Our Future, the group that backed former House Speaker Newt Gingrich in the Republican primaries and was the first beneficiary of the deep pockets of casino entrepreneur Sheldon Adelson and his wife. The super PAC continued to pay its founder, Rebecca Burkett, long after Gingrich dropped out of the race. In all, Burkett received more than $500,000, half of which came after May, when Gingrich ended his quest for the nomination. In an interview with Business Week, Burkett said that Winning Our Future still received phone calls regarding the election and the super PAC was still paying for her services.

For Burkett, like many other consultants, super PACs were a lucrative career move. In a down economy, political spending proved to be a growth industry, and the gravy train is unlikely to end.

Restore Our Future declined to comment on what the PAC is planning to do with the rest of the cash; Priorities USA Action did not respond to our requests for comment.

Here are the ten super PACs with the most cash still in the bank:

Super PACs with the most cash on hand