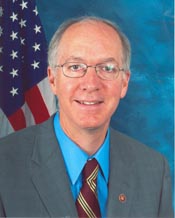 Even before he was elected last November to represent Chicago's southern exurbs in the House, Illinois Democrat Bill Foster decided to sell his stake in Electronic Theatre Controls, a company he founded with his brother. Foster jettisoned the shares — worth at least $5 million — "to minimize potential conflicts of interest when voting on legislation that might impact his personal finances," according to his press secretary.

Now that President Barack Obama's inaugural festivities are over and the 113th Congress is getting down to serious business, Sunlight decided to take a look at the financial profiles of its 90 newest faces — 52 Democrats, 37 Republicans, and one independent — who are either first-time members of their chambers or, like Foster, returning from a hiatus. The new lawmakers are, on average, far more affluent than most Americans; many have extensive financial portfolios that intersect with their committee assignments, and many are indebted to interest groups that will undoubtedly be seeking their support on issues likely to come before Congress this year.

Rep. John Delaney, D-Md., has an immense financial portfolio worth between $47 million and $231 million, making him one of the top 10 wealthiest members of Congress. He was paid a total $1.1 million from his company, CapitalSource Finance, and Alliance Partners LLC — both investment firms. And he accrued additional millions from dividends and capital gains. Now a member of the Financial Services Committee, Delaney will be responsible for regulating an industry in which he made his millions and still has a vested interest. (Securities and investment was also Delaney's top contributing industry in the 2012 election.)

Will McDonald, a spokesman for Delaney, emailed Sunlight that Delaney's holdings "will not affect his voting decisions in any respect."

The new members of Congress own a variety of assets, from real estate holdings to stocks, and are required to report these assets annually to the House Clerk or Secretary of the Senate. While rules bar executive branch officials from overseeing a company in which they own a stake, there is no similar restriction placed on lawmakers in Congress. As the Sunlight Foundation and The Washington Post reported last year, sponsoring or voting on legislation that could potentially benefit a member is not uncommon. Though most of the congressmen Sunlight looked at were untested, their personal investments as reported in May 2012 may indicate how they'll vote on certain issues in the coming session.

Members deny that their investments will influence their decision-making in Congress. A spokesman for Delaney said in an email: "The Congressman’s personal assets will not affect his voting decisions in any respect. Congressman Delaney is committed to following every rule and regulation both to the letter and the spirit in which it was conceived."

Peters' office also wrote back: "Rep. Peters strongly supports the Stock Act and its vigorous reporting requirements that promote full transparency and he intends to be vigilant about his compliance, ensuring all reportable transactions are disclosed in a timely manner. Voters will have the information they need to be confident he's acting in their best interest and in the best interests of the country."

The Center for Responsive Politics released new information on the riches of the new lawmakers, after exhaustively tabulating the personal financial disclosures of 113th Congress. Though not all the new members of Congress are wealthy, on the whole the new members do not reflect the population: The median net worth of the incoming group is $1,066,515, or about $1 million more than the rest of the population, the Center found.

How valuable a member's assets actually are is harder to say. Rep. Peters and his spouse may be worth as much as $206 million or may be net debtors in a $33.7 million hole. Financial disclosure rules require members to report the size of their assets and liabilities within broad ranges, so their actual net worth can't be determined. Averaging the two figures provides an estimated net worth of $86.5 million, but how close that figure comes to reflecting reality cannot be determined by reviewing the disclosure forms. What is clear from the forms is that Peters owns a diverse list of assets ranging from stocks in oil companies to government bonds.

Not every new member is quite so well-to-do. Rep. Kerry Bentivolio, R-Mich., a former automotive designer and teacher who also raises reindeer, collected unemployment payments in 2011. Bentivolio resigned from his teaching position amid accusations of threatening students. Two members listed no assets at all. Rep. Kevin Cramer, R-N.D., put nothing on his personal financial disclosure, apart from his salary and his positions at University of Mary and Roughrider Honor Flight, an organization that raised money to fly North Dakotan World War II veterans to visit Washington, D.C. Rep. Kyrsten Sinema, D-Ariz., also listed no assets, but did have one liability: a student loan of between $15,000 and $50,000. And despite the value of his stakes in Valadao Dairy and Triple V Dairy, Valadao's liabilities — most of which are listed as lines of credit for the dairies — range between $6.8 million and $31.5 million.

Even though they're relative newcomers to the political scene, special interests have already made large investments in freshman, who raised millions from groups that are likely to be lobbying on everything from immigration to energy, from budget cuts to tax changes to entitlement reform.

Looking at the top donors to each freshman member as determined by the Center for Responsive Politics, Sunlight found that the most generous donors also have big interests and ideologies on Capitol Hill.

Topping the list of donors to the 113th freshman class is the tax-focused conservative non-profit Club for Growth, which gave nearly $1.2 million. Sen. Ted Cruz, R-Texas, received more than half of Club for Growth's freshman donations, followed by Rep. Thomas Cotton, R-Ark., with $246,000. Club for Growth Action, the non-profit's super PAC arm, spent $16.6 million in independent expenditures to bolster its favorites — including an additional $5.6 million for Cruz.

Emily's List, a political action committee supporting pro-choice, female Democrats, came in second on the donor list–to freshmen who ranked it among their top donors, it gave a total of $914,000. While Sen. Elizabeth Warren received the lion's share from the group–some $307,000, while the 12 other women elected to Congress on Emily's List's list received $102,000 or less. Though some of the amounts were relatively modest, Emily's List still emerged as the biggest donor for 10 of the candidates it supported.

The next three groups on the list — progressive non-profit MoveOn.org, American Federation of Teachers and JStreetPAC, the political action committee for the "pro-Israel, pro-peace" non-profit — each gave around $350,000, exclusively to Democrats.

The most active donating "industry" was the retired block. Typically more politically active than other segments of the population, retirees donated at least $11.2 million to the then-candidates, now new members of Congress. During the 'fiscal cliff' debacle that was resolved with Obama's machined signature Jan. 2, the issues of Social Security and Medicare were constantly raised. And with the national debt ceiling debate set to rage on in the coming month or so, the "senior issues" will surface again.

With an estimated $10.8 million, lawyers and law firms rank a close second to top donating industries for new members. Virginia Democratic Sen. Tim Kaine took in $1.9 million from the sector, by far the most of any new member of Congress. Fundraising powerhouse and former Harvard Law School professor Sen. Elizabeth Warren, D-Mass., received close to $1.2 million.

For the complete lists of top industries and donors, compiled with information from member profiles on CRP, see below.