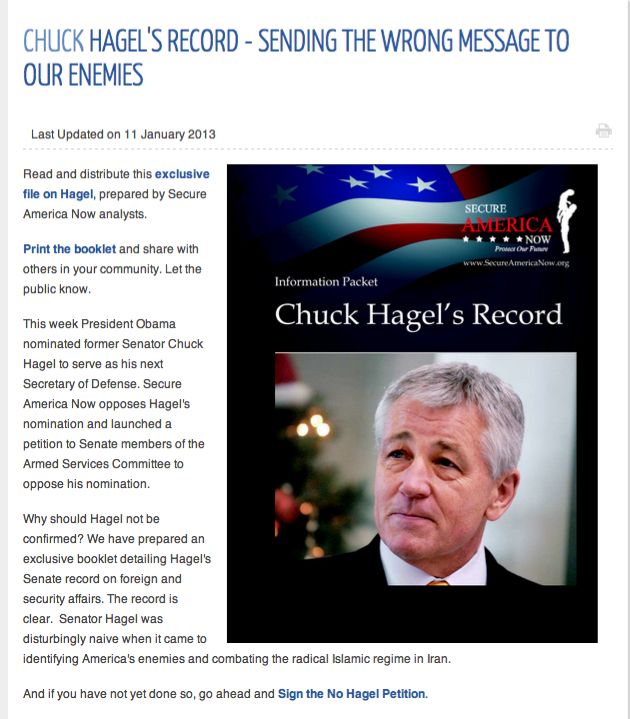 As former Sen. Chuck Hagel, President Barack Obama's pick for secretary of defense, faces a Senate confirmation hearing today, he's under online attack from a group that's previously been criticized for a "mostly false" TV ad and "laughably bogus" polling. Though the group, Secure America Now, doesn't disclose its donors, and has yet to file a full year's tax return for either of its non-profit arms, Sunlight has learned it is run by a longtime political aide to Ronald Lauder, a cosmetics heir who has become a patron of Jewish causes and Republican candidates.

Secure America Now is one of a handful of organizations attacking Hagel for the Nebraska Republican's sometimes outspoken critiques of the Israeli government and U.S. policy in the Middle East. Yet the group stands out for its careful playing of friendly media and its apparent willingness to let erroneous information remain on the record in order to keep its actual origins unknown.

In 2011, when Secure America Now released a poll at CPAC, an annual gathering of conservative activists, it was described by Big Peace — one of a network of websites founded by the late right-wing gadfly Andrew Breitbart — as the product of the bipartisan partnership of two well-known political pollsters: Republican John McLaughlin and Democrat Patrick Caddell.

Alexander Marlow, who was Breitbart's first hire in 2008 and is now managing editor of Breitbart News described the new organization as "a nonpartisan, grassroots effort" launched by two pollsters-turned-activists. Awareness of polling showing American unease over security, Marlow wrote, "compelled the two gentlemen to launch SecureAmericaNow.org."

However, a lawyer for Secure America Now tells Sunlight that account is wrong. McLaughlin "is not a member of the Board of Directors, and has never served as an officer or in any other governance capacity, ever… Mr. McLaughlin is also not a founder of SecureAmericaNow.org," Jeffrey P. Altman, a lawyer who represents Secure America Now, emailed, highlighting words for emphasis, in response to an inquiry from Sunlight. Altman said that McLaughlin is a member of an advisory board that plays no official role.

Altman told Sunlight that the group was first put together in October, 2010 by Allen Roth, a longtime political aide to Lauder, a politically active cosmetics heir who last year quietly underwrote an effort to turn out American voters living in Israel while a number of Republicans, including presidential nominee Mitt Romney, were casting doubt on Obama's support for the Jewish state.

Roth, who didn't return calls for comment, serves as board president for SecureAmericanNow.Org (which is technically a 501(c)4, a politically active non-profit). He plays the same role on a related non-profit, the Secure America Now Foundation, which as a 501(c)3 organization, is not permitted to engage in partisan politics.  Neither group has yet filed a full year's tax return disclosing who else is in charge, but Altman identified other board members as David Goder and Michael Hayes for the foundation and Devon Cross and Paul Atanasio for the (c)4.

The details of Secure America Now's corporate structure came only after Sunlight made numerous calls to the organization and those linked to it questioning McLaughlin's role:  Last year, Secure America disclosed spending $670,660 opposing Obama's reelection. More than 85 percent of group's independent expenditures was paid to McLaughlin & Associates — the polling and strategic consulting firm founded and headed by the same John McLaughlin that Big Peace, The Center for Public Integrity and other organizations identified as a founder of Secure America Now.

McLaughlin didn't return calls for comment. Altman declined to discuss Secure America Now's business arrangements with McLaughlin's firm, beyond saying, via email that "all such arrangements and activities are in strict compliance with the law and in accordance with nonprofit best practices."  One such contract suggests that McLaughlin & Associates picked up a 15 percent agency commission — the typical rate for ad buyers — on a $101,555 buy to run 60 ads on WPTV, the West Palm Beach NBC affiliate in September.

The ads that ran on TV and online were exceptionally tough, even by the standards of last November's election. One extended web ad viewed nearly 235,000 times includes footage of planes hitting the twin towers, accuses Obama of apologizing for America, and ends with footage of what appears to be a burning truck and then an explosion. The Center for Public Integrity summed it up thusly: "Fear-mongering anti-Obama ad seeks to scare the bejesus out of America."

Up until now, neither McLaughlin nor anyone else affiliated with Secure America Now appears to have corrected the record about who founded the non-profit, even as the apparent relationship between the group and McLaughlin came in for withering criticism. Think Progress, a left-leaning web site, slammed the group in July, 2011 for commissioning its "own founders to conduct a flawed poll." The article quoted another pollster, John Zogby, as saying the move was "clumsy" and that McLaughlin and Caddell "should know better". At the time, McLaughlin absorbed the barbs, but appears not to have argued with the notion that he was in charge of Secure America Now.

The polling too came under attack. The Washington's Post's polling manager, Peyton Craighill, called their results–among them that only 43% of Jews planned to vote for Obama's reelection–"a clear example of advocacy polling. They’ve generated leading questions to elicit a desired result to prove a point. "  Fifteen months after Secure America Now released its projections, exit polls taken after the election showed Obama winning 69% of the Jewish vote.

While McLaughlin was getting raked over the media coals, Secure America Now's real founder stayed out of the limelight.  Allen Roth, the board president, is a longtime activist for right-wing Israeli causes, but his name doesn't appear anywhere on the group's web site. (The web site also claims the group runs a super PAC–which would have to disclose its donors–although the group's lawyer acknowledged that no such PAC exists, and described the statement as "aspirational").

Roth, a board member of the American Conservative Union, is also president of One Jerusalem–a non-profit formed to fight the division of Jerusalem as part of the Israeli peace process. In a 2010 tax filing, One Jerusalem is listed as a "direct controlling entity" of secureamericanow. Altman, the group's lawyer, disagreed with that characterization. "As of today they're completely independent organizations," he said. The tax filing also misidentifies the tax code the group operates under; Altman said the group listed is a (c)4, not a (c)3.

Roth is best known, however, for his connections to Lauder, a son of the makeup empress Estee Lauder and one of the country's wealthiest men: he was worth $3.4 billion last September, according to Forbes. Lauder has been president of the World Jewish Congress since 2007.

Lauder got into politics in the 1980's. According to the New York Times, he "was rewarded for his campaign fund-raising with an appointment as deputy assistant defense secretary in the Reagan administration and, three years later, by being named ambassador to Austria". In 1987, he founded The Ronald S. Lauder Foundation, which "seeks to revitalize Jewish identity" especially in Europe where Jews survived the holocaust and communism.

Lauder also worked on back channel peace negotiations between Israel and Syria around 1988, according the "The Missing Peace: The Inside Story of the Fight for Middle East Peace," by longtime diplomat Dennis Ross, who served as Middle East envoy under Bill Clinton. Allen Roth made 9 trips to Damascus with Lauder around 1988, according to Daniel Pipes' account, though the effort ultimately failed.

In campaign finance reports since the 1990's, Roth has listed various Lauder-related companies as his employer including Estee Lauder, Ronald Lauder Inc., Ronald S. Lauder Foundation, RSL, RSL Management, among others.  Roth was quoted as a spokesman when Lauder ran for New York City mayor on the Conservative Party line (Roth's filled a variety of roles for the Conservative Party); when Lauder waged several fights for term limits for New York City politiicians, Roth helped run the campaign.

Although Roth and Lauder have worked together on right-leaning Israeli causes for decades, there's no way to know whether Lauder's money is backing Secure America Now–or any of the other secretly-funded groups working to influence U.S. politics. "I'm not going to tell you who the donors are," said Altman. But, he added, the self-described grassroots group doesn't rely on a single benefactor."There are lots of them," Altman said.