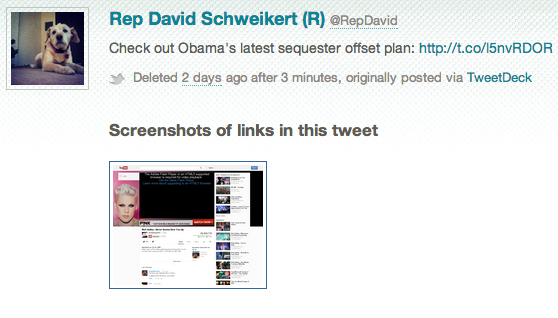 Some may not remember this now that most members of Congress are on Twitter, but it was once not permitted by Franking rules for our representatives to use Twitter. Sunlight successfully campaigned for those rules to be changed through our Open House Project and in 2008 with our campaign called “Let Our Congress Tweet.” We argued then, and still believe, that members of Congress be allowed to join modern methods of communication to interact with constituents and share their thoughts publicly. We’re fascinated and excited to see politicians eagerly grasp the power of social media and when we were approached by the original Politwoops.nl to bring their project to the U.S., we happily adapted it and open sourced it. 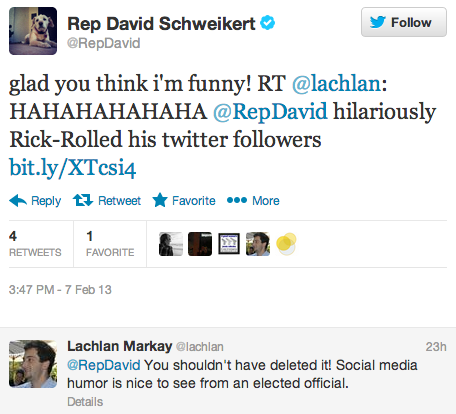 Rep. David Schweikert (R-AZ) is a congressman who fully embraces the potential of twitter by sharing everything from his life in committee hearings, discussions of his “bipartisan” office coffee machine down to photos of his dog, Charlie. Like everyone on social media, he deletes tweets he has second thoughts about and thanks to Politwoops, we can see what those missives were. Earlier this week, Rep. Schweikert deleted a tweet encouraging follower to “[c]heck out Obama’s latest sequester offset plan” and then linked to Rick Astley’s Never Gonna Give You Up. It appeared that after just two minutes he regretted this Rickrolling, but when intrepid Sunlight reporting fellow Jake Harper tweeted the politwoop it was retweeted by none other than Rep. Schweikert. After a number of folks tweeted his deletion Rep. Schweikert responded “glad you think i’m funny!” Of course, Rep. Schweikert is well aware of our Politwoops project and may have planned this whole thing since he goes so far as to delete tweets with the goal of them showing up in Politwoops: