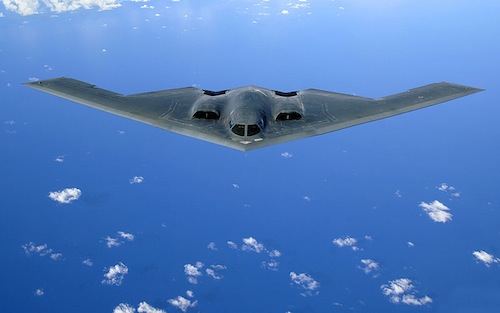 The looming sequester–across-board-cuts in defense and domestic discretionary spending that Congress and President Barack Obama agreed to in 2011–was the subject in opening remarks at an unusual press briefing offered by officals of Northrop Grumman, a major defense contractor that could see its business shrink along with the Pentagon budget.

In 2012, Northrop Grumman ranked tenth among U.S. contractors with $4.2 billion in awards mostly from the Pentagon, data in USASpending.gov shows. And according to the Center for Responsive Politics, Northrop Grumman ranked as the tenth largest spender on lobbyists in the federal influence game. But even the $12.7 million in lobbying the aircraft and guided missile manufacturer spent last year cannot fully protect the firm from Washington gridlock: if Congress and the President cannot agree to an alternative, the sequester will take effect March 1.

Last week, the company's chief financial officer, Jim Palmer, said he would not comment on the sequester or the alternative measures proposed in Congress, but he did outline the company’s growth plans. He identified the unmanned sector, or drones, and related intelligence service reconnaissance products and services as areas for expansion. Palmer also suggested embedding more cyber capabilities into new and existing technologies, an idea echoed in today's press conference.

Building aircraft for other nations is another business growth opportunity, Palmer noted.  Selling the Global Hawk, an unmanned plane, to South Korea would be the first step. Arms sales to foreign nations must be reviewed by the State Department, and Palmer said that once the export control issues had been resolved with South Korea, it could open doors for sales in additional countries. Japan was another potential customer mentioned for the Global Hawk. Similarly, Northrop Grumman could sell Polar Hawk, a plane similar to the Global Hawk but with arctic capabilities, to Canada.

Making these sales requires political maneuvering that can be seen in lobbying disclosures. Northop Grumman had in-house lobbyists, plus the services of 15 outside lobbying firms to advance their various interests making contacts with Congress, the administration and the Defense Department. In all, the company employed 49 lobbyists, 34 of whom had gone through the revolving door.

In addition to looking for new markets overseas, Northrop Grumman has also adapted its domestic pitch for a more austere time. One of the main focuses of the media day was lowering costs to U.S. taxpayers, as evidenced in the slogan for the event: “Driving Innovation, Delivering Affordability.”

The focus of getting more for less is an issue any modern business with legacy operations. One problem that Dave Mazur, vice president and B-2 program manager,  discussed was getting planes untied from obsolete, proprietary software. The B-2 bomber may look as stealthy as they did when they first appeared in the 1980s, but the computer language it runs is JOVIAL, a language which few programmers still use. One project is to convert the software in to a more common language, C, with the possibility of integrating apps from other languages for more flexibility and a wider range of developers.