While some information on the staggering sums given by the more than 20 corporations and unions that contributed to President Barack Obama's inauguration has been reported, like AT&T's staggeringly large $3 million donation, less attention has been paid to the goods and services that companies provided to the 57th inaugural.

Even though the Presidential Inaugural Committee won't report how much each donor contributed until it files with the Federal Election Commission in late April, some figures appear in disclosures that have to be filed with the Senate Office of Public Records and the House Clerk's Office. 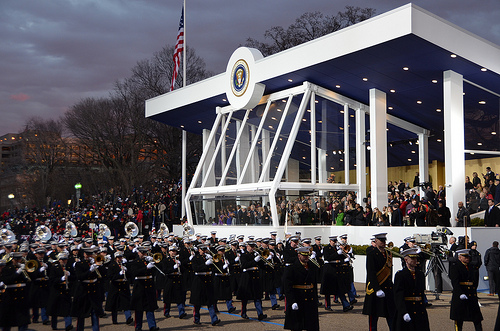 Online retailer Amazon.com disclosed providing more than $10,000 in web services while AT&T kicked in $123,061 in "communications services," the companies disclosed recently in their federal lobbying reports, where they are required to disclose any donations towards presidential inaugurations, candidate committees and charitable events connected to lawmakers and administration officials.

Despite the inaugural committee’s pledge to voluntarily disclose its donors on its website, Amazon is not on the list of nearly 3,200 donors (AT&T is). The committee now appears to have folded up; numerous email addresses for inaugural committee officials no longer exist. An email to "questions@2013pic.org" tells you that the inaugural events have concluded.

In a reversal from 2009, President Obama allowed corporate donations–permissible under campaign finance law–and asked for them in far larger amounts (donors packages ran as high as $1 million) than his predecessor, George W. Bush, who capped gifts at $250,000 for the festivities that kicked off his second term. Obama's second inaugural committee also disclosed less about its donors than his first by not including the amounts of each donation.

These two in-kind donations — which came at the end of last year — may only be the tip of the iceberg. Lobbying registrants–which include in-house lobbying operations of companies and firms devoted to influencing government–are not required to report the inauguration donations they gave in 2013 until late-July, when the next round of federal lobbying reports are due.

If past is prologue, AT&T and Amazon.com won't be alone–more than 80 companies donated goods and services to President Clinton's first inaugural, USA Today reported at the time.

AT&T's more than $3 million in giving likely shattered records. Clinton's first inaugural solicited up to $1 million from companies and got $1.5 million from HBO to televise a Quincy Jones concert. George W. Bush capped his first and second inaugural at $100,000 and $250,000 per contributor, respectively. And President Obama, of course, did not even accept corporate contributions for his first inaugural.

AT&T reporting spending more than $17 million lobbying Washington last year and has been a major contributor to many presidential inaugurations, including the maximum $250,000 from its political action committee for George W. Bush's second inaugural. Amazon did not donate to Bush’s committee in 2005.

Representatives for AT&T and Amazon did not respond to requests for comment.