With the sequestration deadline rapidly approaching, one set of companies has more at stake than any other, at least in terms of sheer dollars: big government contractors.

By our count, the ten biggest government contractors would stand to lose roughly $13.6 billion in contracts if the across-the-board 9.4 percent cuts to discretionary defense spending cuts were applied equally across their 2012 contract award amounts. Compare that to the $115 million they spent on lobbying and campaigns, and that investment in politics starts to look like a bargain.

And if that political investment helps to avoid the proposed cuts and keep these companies’ contracting revenues stable, that would amount to a 125-to-1 return for these 10 companies, on average. 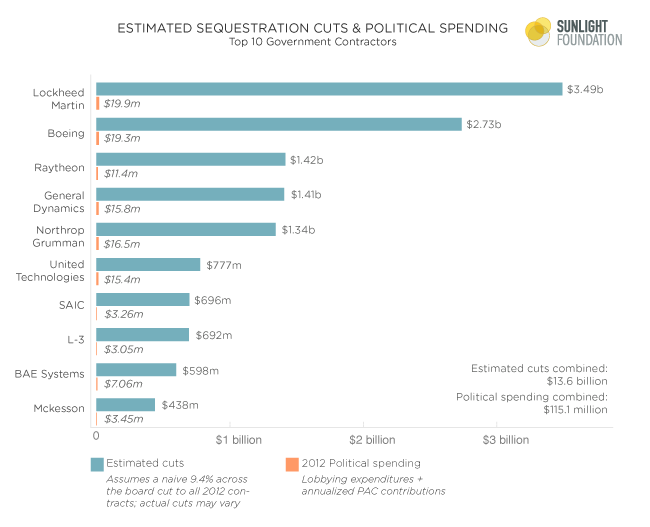 Of course, we recognize that we have no way of knowing how the cuts would actually be applied. Lacking a crystal ball or insider knowledge, our best guess is a naïve across-the-board estimate. But even these rough calculations are enough to make one thing clear: compared to what is potentially at stake, these companies are not even spending one penny of lobbying and campaign contributions per dollar of potential cuts.

For the two biggest contractors, the return would be even bigger than 125-to-1. Take Lockheed Martin, the king of contractors at $37.1 billion in 2012. Lockheed spent $18.1 million on lobbying in 2012, plus made $3.5 million in PAC contributions for the 2011-2012 cycle. If the ax falls equally on Lockheed’s contracts, that would be $3.5 billion in cuts – or about $175 for every one dollar Lockheed spends annually on politics (based on 2012 numbers, spreading PAC contributions over two years).  For Boeing, the number two defense contractor, the ratio would be 142-to-1.

Admittedly, the political spending does not cover what these companies contribute to the Aerospace Industries Association, which is running a campaign to prevent sequestration. (We don’t have good data on that)

In the context of other attempts to quantify the return to lobbying, these numbers come out a little higher than the 100-to-1 return the Carmen Group has estimated for its clients, though not quite at the 22,000-to-1 two tax researchers once calculated for companies who lobbied on the American Jobs Creation Act of 2004.

These numbers also echo a puzzle that political scientists have long posed: given what’s at stake in policymaking, why do companies spend so little? After all, given the threat of a sequester through all of 2012, you might have expected companies to have spent even more money last year. Possible explanations could be that 1) these companies should indeed be spending more, but they’re not because they haven’t figured out how to solve the collective action problem and are instead underinvesting because they’d rather somebody else bear the burden of convincing stubborn members of Congress to avoid sequester; or 2) these companies’ executives believe that they are spending enough to accomplish what they want, so why spend any more than they have to? If so, they are getting quite a bargain.

Interestingly, in public statements, Lockheed CEO Marillyn Hewson has told investors not to worry, even despite the fact that 82% of Lockheed’s 2011 revenues came from the U.S. government: She is confident that the sequester will not go into effect. Maybe she and her lobbyists know something the rest of us don’t.

Thanks to Alexander Furnas, Amy Cesal, and Caitlin Weber for their help in preparing this post

Notes: To get total contract awards, we combined multiple entities sharing similar names to the top ten contractors. Usaspending.gov does not always properly aggregate similarly-named entities. And as we pointed out recently, USAspending.gov data are not always reliable.