We weren’t  looking for it, but thanks to Sunlight’s Scout alert system for tracking legislative and regulatory actions, we found it–and the result was this story on our Reporting site: ExxonMobil lobbies consumer agency on phthalates.

One of the alerts I have set up in Scout is the Consumer Product Safety Commission (CPSC), the independent agency that regulates the safety of consumer products. In the past, Sunlight has followed controversy around a public CPSC consumer complaint database launched in 2011 that is opposed by industry and often under attack by congressional Republicans.

The alert that came my way recently was this one regarding a final rule the commission was publishing in the Federal Register dealing with pthalates. Pthalates are plasticizers that are under scrutiny for possible health effects, particuarly in children. Specifically, the rule addressed standards for phthalates in parts of toys that are not accessible to children.

Originally I thought I’d do a story focusing on this rule, but as I talked to advocates working on the issue they brought up another, more encompassing issue. As I soon learned, the CPSC, under mandate from a 2008 law known as the Consumer Product Safety Improvement Act, was nearly a year late with a study on the health effects of these chemicals, and nobody knew quite why.

As I dug into the topic I realized it had a number of elements that Sunlight cares about: public data and influence. As it turns out, the advisory committee, known as CHAP, or Chronic Hazard Advisory Panel, that was conducting the review of science around phthalates for the CPSC conducted its deliberations largely in public. The Commission maintains a spot on its website that gathers together records of all of the committee’s meetings, including links to materials submitted by participants and logs of the attendees, some of which took place at the commission’s office in Bethesda, Md.,  some of them by teleconference. 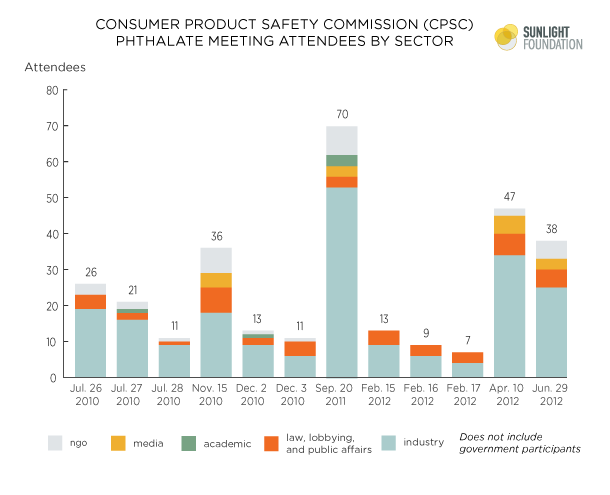 For us, this was a gold mine of information. I was particuarly interested in the meeting logs, as we have conducted analyses in the past on similar logs voluntarily disclosed by financial agencies on rulemaking for the Dodd-Frank financial reform law. But while it is commendable that the CPSC makes these logs public, like those at the financial agencies, the format varies widely, ranging from handwritten lists like this one to pdfs like this one. There was no standardization and no easy way to put thse into a spreadsheet to figure out who was attending these meetings the most.

So Jake Harper, a Sunlight fellow, and I went to work, typing these records into a database by hand. After doing some standardization of company names and some sleuth work we were able to code these participants by type, such as “industry,” and “ngo” for “non governmental organization.” A pattern quickly emerged: industry attendees far outweighed nongovernmental advocates, and ExxonMobil, its lawfirm Latham and Watkins, and the American Chemistry Council, fierce advocates for the safety of phthalates, participated the most.

Of course we’d far prefer that federal agencies not only make such information public but do so in a downloadable, machine readable format. Sunlight was able to marshall the resources to do the data entry in this case, but we can’t in every case, nor do we think we or others should have to do so.

So: a story found sideways from a Scout regulatory alert that led to an interesting story about how regulatory sausage is influenced after laws are passed, and which showed how a government agency that does better than most in making information public could still improve. Plastics.