The issue at the Federal Election Commission Thursday: Deciding how to say "we can't decide."

Not coming to a decision on the issue of how to regulate political speech has become commonplace at an agency divided between two Democratic commissioners in favor of increasing disclosure of the funders behind political ads and three Republicans opposing reform. With four votes needed to take any action, there are a lot of no decisions.

But on Thursday, things got a bit more frustrating than usual. 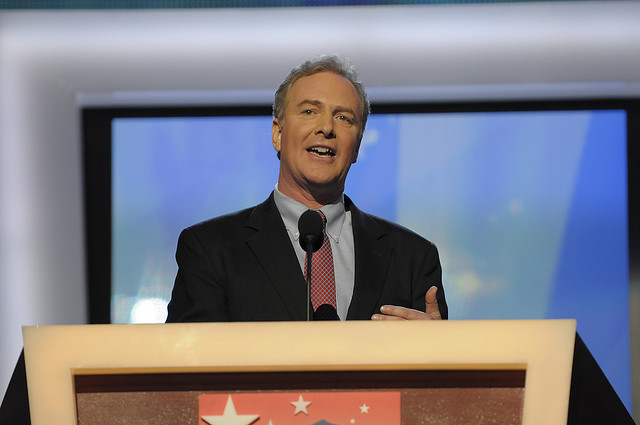 Rep. Chris Van Hollen, D-Md., who is suing the FEC over donor disclosure

There was a brief recess, two apologies to the public by visually and verbally exasperated Democratic chairwoman Ellen Weintraub, a Democrat, and then, the public was kicked out. The commissioners decided to convene an executive session, to decide what to do.

Why the sticky atmosphere? The FEC is in ongoing litigation about the rule under discussion — the reporting of so-called issue ads intended to influence voters without explicitly calling for the election or defeat of a candidate. In the court challenge, Rep. Chris Van Hollen, D-Md., says the FEC too narrowly wrote regulations based on the Bipartisan Campaign Reform Act of 2002, thereby preventing the disclosure of donors behind issue ads. The complex case, Van Hollen v. FEC, has already seen a ruling in favor of Van Hollen in March 2012, followed by an Appeals Court reversal in September.

Now the case has returned to federal district court in Washington, where Judge Amy Berman Jackson will be in charge of deciding whether the FEC erred in writing the rule. The stakes are high for both campaign reformers and groups that want to air election ads but keep their donors anonymous. In the most recent election, millions of dollars were spent on electioneering ads, and there were barely any donors disclosed for them. Meanwhile, opponents of campaign finance regulations have said that disclosing donors infringes on free speech.

On Thursday the FEC was under pressure because it faces a March 11 deadline to tell the district court if it intends to re-write the rule, a move that hinged on its response to a petition by a conservative group that was seeking a narrow re-working of the issue advertisements rule. The group is the Virginia-based Center for Individual Freedom (CFIF), a 501(c)4 nonprofit organization that would benefit from avoiding an overhaul of the rule because it could run ads without disclosing its funders. CFIF, protected under the tax code from publicly reporting donors, spent at least $1.8 million on ads opposing Democrats in the 2012 campaign.

The three Republican commissioners voted to initiate a rulemaking in response to the petition from CFIF, which is also a party in the Van Hollen v. FEC case. The two Democrats dissented so the petition failed; Weintraub criticized the petition as "cosmetic fix" while the rule requires a "major overhaul."

After the vote on the petition, Democratic Commissioner Steven Walther offered a motion during the public meeting that would direct the commission to issue a public explanation as to why the commission could not come to a decision, including summaries of statements filed by commissioners. But many of the commissioners, including Walther himself, were confused by the motion, which he said was presented to him by the FEC's internal lawyers.

It's not exactly clear why an executive session was in order to decide how to go forward — except that it was related to what the FEC should present the court in the Van Hollen lawsuit. In the end, the commissioners adopted the motion.

This is just the latest example of the commission’s rocky workings. In September of last year, GOP commissioner Donald McGahn, now the agency's vice-chair, threw his support behind a lawsuit against the very body on which he serves. Campaign finance reform activists have railed against the commission, placing blame on the Republicans and renaming the agency the "Failure to Enforce Commission." But they have also criticized President Barack Obama for not nominating new commissioners who are willing to tighten regulations in the wake of the Supreme Court's 2010 Citizens United decision. That landmark case helped pave the way for the over $1 billion in spending on the 2012 election by outside groups. Four of the five commissioners are serving expired terms.