As donors and Democratic activists meet with President Obama surrogates today and tomorrow to discuss the launch of a political nonprofit group that will help advance president's agenda, new details have emerged about it. But not the list of high rollers who have been asked to pay $50,000 to dine tonight with the president.

Organizing for America staffers have billed the event, at an upscale hotel blocks from the White House, as a summit:  About 70 people–a mix of donors, neighborhood leaders, and former campaign volunteers–are participating in closed workshops about the group's vision. The day kicked off with open-to-the-press speeches by former Obama senior advisor David Plouffe and other top staffers from Obama's election effort. 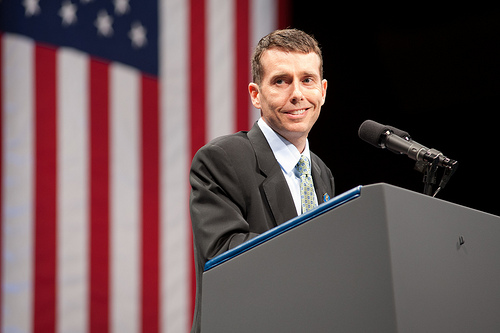 But the group's success may depend on how much money it can raise and the easiest way to accomplish that is through rich donors. So there is an event for them, though the dinner tonight will also be attended by volunteers and campaign staffers, organizers said. OFA spokesperson Katie Hogan said she did not have a list of dinner attendees.

The organization — which can operate without disclosing its financial activity publicly and raise unlimited amounts of money because of its nonprofit status — will voluntarily release its initial donors and the exact amounts they gave on its website soon after the end of March, according to Hogan, and will do so every quarter. The group had initially said it would only disclose donation amounts in ranges and would accept corporate money but those decisions were reversed after criticism.

OFA has also been criticized by watchdog groups, including the Sunlight Foundation, for selling access to the president after it was reported that donors committing to give or raise at least $500,000 to the group would get quarterly meetings with the president and serve on an advisory board. That idea came at the request of high-dollar donors at a meeting in New York about four weeks after OFA was launched in January, according to Hogan. Many of those donors were involved in the Obama campaign's "National Finance Committee," a group of the top bundlers and donors that also met quarterly during the campaign.

Indeed, there has been some grumbling among top Obama donors about not getting access to him or being sufficiently thanked, according to an aide to a top Obama campaign bundler who preferred not to be named.

But Hogan says the conclusion that this arrangement for top donors is "some sort of threshold for access" is "totally wrong."

Hogan said the New York high-donor meeting was part of an attempt to establish a high-level, a mid-level and "grassroots" donor structure for the new organization, which has access to the Obama campaign's impressive voter database and email subscriber list.

Watchdog groups also sent a letter to the president Wednesday asking him to shut down OFA because they say he may be violating ethics laws by soliciting gifts from sources that his administration's policies affect. Hogan declined to comment on the complaint.

Like other OFA officials, she did insist that the group's mission is not campaign related: "We're not helping candidates, period. We are not involved in electoral politics…We are solely issues. The DNC's there for them. That's not us," she said.

The group's first effort on behalf of the Obama agenda, however, which begun in February, featured online ads pressuring 13 GOP members of Congress to support universal background checks for gun buyers. Hogan said the group will stay out of specific races.

She said the group will not run ads in that electioneering communications window, the two month period before the general election when television and radio advertising mentioning candidates for office has to be reported to the government. That may be a strategy to stay out of legal trouble, said Tara Malloy, an associate general counsel at the Campaign Legal Center. Tax law requires that groups like OFA do not engage in political activity — such as ads calling for the election or defeat of a candidate — as their primary purpose.

Some of the president's top bundlers are planning to attend the dinner, Bloomberg News reported. That includes Andy Spahn, an advisor to Dreamworks executive Jeffrey Katzenberg, Boston hedge fund executive Orin Kramer and San Antonio businessman Henry Munoz, all of whom bundled at least $500,000 for the campaign. Other bundlers and top donors to the pro-Obama super PAC Priorities USA Action, including Texas trial lawyer Steve Mostyn and Qualcomm co-founder Irwin Jacobs, are not.

Some others to look out for are the biggest donors to Priorities USA Action, including New York hedge fund billionaire Jim Simons, Chicago publisher and gay activist Fred Eychaner and New York architect Jon Stryker. Below is a list of all of the donors who gave at least $1 million to the super PAC.

Note: An earlier version of this article incorrectly stated that Jeffrey Katzenberg planned to attend the dinner.