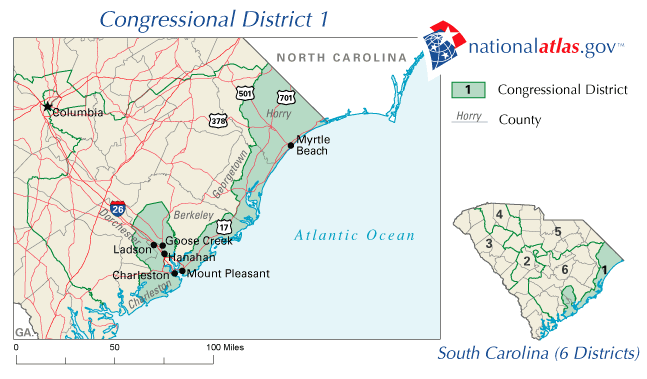 A lot of candidates are spending a lot of their own money in the contest to pick coastal South Carolina's next representative in Congress.

The race to replace Tim Scott, a Republican who won appointment earlier this year to the U.S. Senate, has attracted a (literally) rich field of candidates, at least on the Republican side, trying to beat disgraced former Gov. Mark Sanford. Sanford, whose once-promising career appeared to have blown up after a much-publicized affair that ended his marriage, is attempting a comeback by winning the House seat he once held in the 1990s. If none of the Republicans wins an outright majority of the vote in Tuesday's primary, there will be a runoff April 2.

All five of the rivals closest to catching Sanford in a recent poll are supplying a large chunk of their campaigns' funds. Of the money raised so far by the six leading candidates, 61 percent of it has come from their closest supporters — themselves.

The special election in South Carolina's 1st Congressional District was already special, featuring two frontrunners with national name recognition. One, Sanford, is infamous thanks to his going AWOL while in office to visit a mistress in Argentina. The other is Democrat Elizabeth Colbert Busch, sister of comedian Stephen Colbert. Athough Colbert Busch loaned her campaign $9,000, she and Sanford have for the most part relied on donations from other contributors to fund their campaigns.

Not so when it comes to the five Republicans polling closest to Sanford. Among them, former state Sen. John Kuhn is the biggest underwriter of his own campaign. His $500,000 loan represents 91 percent of his campaign's take.

Then there's Teddy Turner, the son of billionaire CNN-founder Ted Turner. The high school teacher wants to avoid being associated with his liberal father but his bank account makes the relationship hard to ignore. Turner has underwritten 68 percent of his campaign's costs, or $350,000, according to reports filed with the FEC.

Meanwhile, social conservative Curtis Bostic turns out to be is financing himself liberally. He's provided his campaign with 63 percent of its funds, or $150,000.

In this well-off group, state Sen. Larry Grooms looks positively frugal. He's only given $100,000 to his campaign, about 30 percent of his the campaign's take. He has raised more money from supporters — $226,915 — than any other candidate other than Sanford, who has brought in $378,897, according to FEC reports.