A few Sunlighters took off for the west coast last week to attend PyCon, the largest annual gathering for the community of Python users and developers. This was Sunlight’s 5th year of attendance, and PyCon holds a special place in our hearts.

We have a lot to be grateful to the Python community for; especially those volunteers who have joined us in the OpenGov group during PyCon’s Development Sprints. The sprints allow contributors to open source projects a chance to meet in person and work on ongoing projects or discuss plans for future endeavors.

In fact, it was almost exactly four years ago that Sunlight asked for contributions to the “Fifty States Project,” with the ambitious goal of “building scrapers and storing data for all legislative information from all fifty states.”  A large contingent of volunteer hackers signed on to help at PyCon 2009 and kicked off what would ultimately become Open States, which now boasts coverage of legislative data for all 50 states. 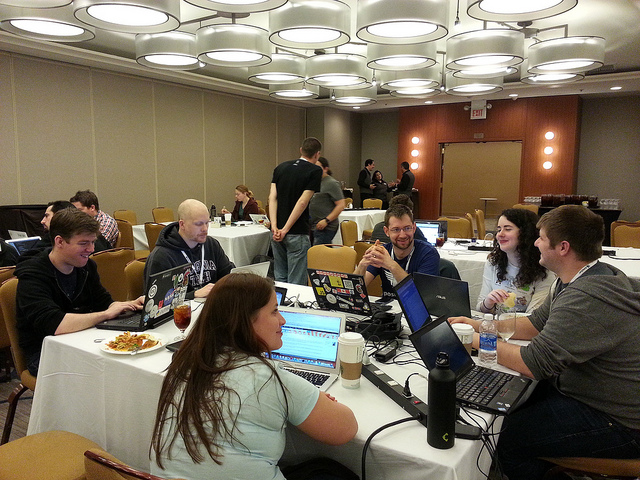 This year also saw some OpenGov sprinting, as a table of intrepid Pythonistas got to work scraping state-level spending data. We were also all treated to a lightning talk by Paul Tagliamonte, whose Hy project left hundreds of attendees stunned and horrified (video not yet posted).

This year’s PyCon will be remembered for its focus on continuing to build a supportive and inviting community of developers.  The Python community is earning reputation for being welcoming to groups of people that are typically under-represented in tech. For a good review of what’s being undertaken and what’s been done, check out this panel: “Scaling Community Diversity Outreach,” featuring Asheesh Laroia, Jessica McKellar, Naomi Ceder, Dana Bauer, Daniel Choi.

Yep: this year was a really amazing time, and not just because everyone at PyCon got a RasPi. Here are a few of our favorite talks, with links to videos and slides: