Tom Meagher is the co-founder of Hack Jersey and the data editor at Digital First Media‘s Project Thunderdome in New York City. 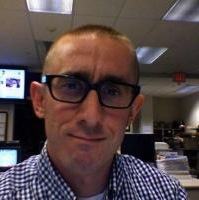 His team builds interactive news applications, supports computer-assisted reporting projects in local newsrooms and offers training. He served as the data editor for The Star-Ledger in Newark, and he lives with his family in suburban New Jersey. Reach him at @ultracasual or @hackjersey.

Wrapped by the hanging air quotes of New York City and Philadelphia, New Jersey’s history of invention and investigative reporting tends to get overlooked. Even within the state, the two disciplines haven’t acknowledged each other much. In recent years, there’ve been hackathons at local colleges or tech groups, but the Garden State’s journalists never really mingled with programmers or dipped their toes into building news applications. Until now.

This winter, Hack Jersey held the state’s first news hackathon and attracted dozens of journalists and developers to learn from and compete with one another. Sponsored by the NJ News Commons, Knight-Mozilla’s OpenNews and many other organizations, the hackathon revolved around a simple (and maybe obvious) idea. By bringing coders and journalists together to use public data and solve problems, we could sow the seeds for an amazing new community here.

With an almost equal number of developers (many of them computer science students) and journalists, there was a great mix of people, skills, background and knowledge at Montclair State University that last weekend of January. For most of the 70-some attendees and the more than 40 who competed, it was their first time at a hackathon. But they were lured by the promise of learning to work with data and building something new.

“The competition factor adds a nice little bonus to it, but everyone’s here to help New Jersey…that’s what we’re here to do,” said competitor Steve Chernoski, a teacher from Lambertville, NJ.

Before the hacking began, the attendees heard from some fine journalists (and the author, who may not qualify for such a designation), but one of the really illuminating parts of the weekend was a lightning talk by Marc Pfeiffer.

After 37 years as a municipal and state administrator, Pfeiffer retired from public service last year. To a room full of jaded journos and inquisitive programmers, Pfeiffer shared the perspective of the bureaucrats who handle FOIA and OPRA (New Jersey’s Open Public Records Act) requests. And he laid out why it can be so damned difficult to get good data from the government.

Pfeiffer said government agencies are slow to evolve, and when change does come, it’s incremental, rather than in grand, bold strokes. He related an anecdote of talking to municipal administrators in New Jersey 10 or 12 years ago and telling them they needed to have a website.

In his time at the NJ Department of Community Affairs’ Division of Local Government Services, Pfeiffer released useful property tax data by liberating bad data from another agency and cleaning it up for the public to use. For the journalists, he offered some advice for cajoling public data from public agencies:

Finally, Pfeiffer reminded the journalists and the developers of the power of good data analysis and meaningful presentation. “Just because the data is there doesn’t mean it has news value,” Pfeiffer said.

After the Saturday morning talks, the 24-hour hackathon began in earnest. Participants split into 11 teams and chose topics to explore, from the efficacy of municipal recycling programs to the devastation of Hurricane Sandy to a re-imagining of how people interact with news and social media in public spaces. The teams worked late into the night and a hearty few hacked away around the clock.

For many of the participants, it was their first time working with data or thinking about software as journalism, much less competing, but their enthusiasm bred some exciting projects. Sunday afternoon, our esteemed panel of judges from the tech and news worlds, watched the demonstrations of the teams’ projects and awarded prizes. The recognized apps included:

Our hackathon brought together a fantastic and diverse group of people to share ideas, experiment and learn from one another. We hope it will be the first of many events in New Jersey to have journalists and hackers working side-by-side to improve our access to public data and our news coverage.

After the projects were presented, judge Jim Schachter lauded the attendees for the combination of journalism and coding that they embraced.

“We can be open to grafting these things together,” said Schachter, the vice president for news for WNYC and New Jersey Public Radio. “We’re in a time where people can make jobs for themselves and make a tremendous difference for our communities, for the country.”

For more information about Hack Jersey, visit the website at hackjersey.com. To get involved, check out our Github repo, fork a project and send a pull request at github.com/hackjersey