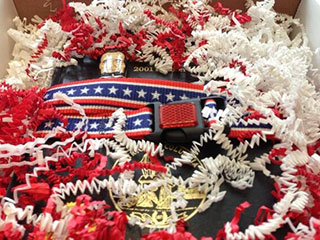 Most states keep their legal code in the open, but a few hold-outs have asserted a copyright over that material. Until just a few hours ago, D.C. was one of them.

Work on opening the D.C. Code has been moving fast. It was just eight days ago that Sunlight received a lovely box full of D.C. data from Carl Malamud (pictured at right). Carl paid hundreds of dollars to acquire a paper copy of the law, then digitized it, freeing an essential public resource from the weird copyright limbo that it had fallen into.

This was a great example of freeing data, but it was also a provocation: Carl was daring the D.C. Council and their vendors to raise a fuss over copyright to make a point about the public’s right to access the law–not only in D.C., but everywhere. But that didn’t happen. Washington Times reporter (and former Sunlight staff member!) Luke Rosiak interviewed Vladlen David Zvenyach of the D.C. government, who said the “copyright is intended to protect [the city council] against [our vendors], not protect [those vendors] against the public.” He also said he had no intention of causing problems for Carl.

This, in turn, prompted Steve Schultze, from the Center for Information Technology Policy (CITP) at Princeton, to issue a challenge:

Ok Vladlen. Why don’t you put your money where your mouth is and put a CC-0 license on your physical and electronic copies of the DC Code?

And guess what: He did! You can now download an (admittedly unofficial) CC-0 copy of the code right from the city council’s website.

This has all happened pretty quickly–hopefully I haven’t gotten the story wrong. But the upshot is clear: D.C. Code data is now available to the public. This is a great testament to the work done by Carl — who has some history prying this sort of state info open — and to everyone else who’s written about this issue and why it’s important (a partial list would have to include Tom MacWright, Steve, Luke, Martin Austermuhle, Cory Doctorow, Josh Tauberer, Waldo Jaquith, and many others).

Now it’s time to actually put this data to use! Our friends at MapBox are hosting a hackathon on April 14 to crack open the Code and start building great stuff with it. If you’re in the area, we’ll hope to see you there.

UPDATE: Josh Tauberer was on the front lines of this fight, and has posted his own account of how it all went down–it’s well worth a read.