It's an all-hands-on-deck approach in an attempt to send a loud message to the administration, and to congressional Democrats, that any cut to Social Security is off limits. The campaign started Friday when White House officials told reporters that President Barack Obama would include the "chained consumer price index" fix in his budget, which would slow the annual cost-of-living increase that Social Security beneficiaries receive. 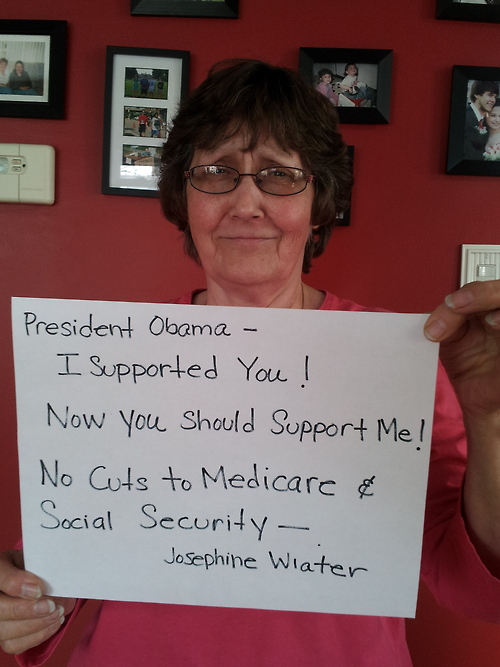 A photo from MoveOn.org's new Tumblr

MoveOn.org activists took to social media, setting up a Tumblr page where Obama supporters can send pictures of themselves, often standing near some kind of Obama campaign swag, while holding signs calling on him not to cut Social Security.

Hundreds of people have submitted photos, according to Steven Biel, MoveOn.org's director of online organizing platforms. Now his team has taken the best images and turned them into an online advertisement, targeted at policymakers and influential people in Washington, D.C. The ads are launching Tuesday with the cost running in the tens of thousands of dollars. The point is to show policymakers that "these are real people making a stink," Biel said.

Along with the online movement, progressive groups including Campaign for America's Future, the AFL-CIO, and the National Organization for Women held a rally outside the White House Tuesday to deliver 2 million signatures on petitions opposing any benefit cuts.

"They are playing with fire," said Liz Rose, the spokesperson for Campaign for America's Future. "It was not hard to get 2 million signatures," she added.

The campaign has included traditional lobbying too. The organization Social Security Works, also in the liberal coalition, registered its first lobbyist last week, something the group is now able to do after raising more funds, according to the group's spokesman Don Owens. Another reason is that the Social Security debate is heating up on Capitol Hill, Owens wrote in an email.

One of the most feared groups in Washington, AARP, has ramped up its resources to oppose the less generous way of calculating cost-of-living increases cut too. The seniors organization released a poll Monday showing that two thirds of voters over 50 oppose the chained CPI, ran newspaper ads in February in markets around the country, and is not ruling out TV ads, if necessary, said David Certner, the group's legislative policy council.

For the liberal coalition, the next step will be making sure Congress "doesn't cave," according to Rose.

There will be a congressional call-in day for seniors Wednesday organized by the National Committee to Preserve Social Security and Medicare. MoveOn.org plans to organize a "day of action," where activists who started petitions on its SignOn.org platform will visit their representatives.

And perhaps most significantly, liberal groups, including MoveOn.org and the Progressive Change Campaign Committee, have threatened to support primary challengers to Democrats who bend on the issue in the 2014 elections.

On the other side of the debate, Fix the Debt — a campaign led by former members of Congress, current city mayors, businessmen, lobbyists and others — has stepped up its activism by registering its first lobbyists in January. This week the group praised Obama's inclusion of chained CPI in his budget. The group has bipartisan leadership but is supported by a council of CEOs that mostly support Republican candidates.