A few weeks ago, our colleagues at the World Bank Institute held a highly informal and very motivating discussion on opening up contracts in fragile states. As many other similar conversations, this event also turned into an animated debate on the role of technology and why talking about the Internet instead of discussing ways to influence decision-making.

Without repeating all the arguments already stated by others, we intend to add a couple, hopefully constructive points to the debate around the effectiveness of technology in solving different kinds of complex problems. Most of our thoughts reflect the questions raised at the WBI event and other ongoing discussions. 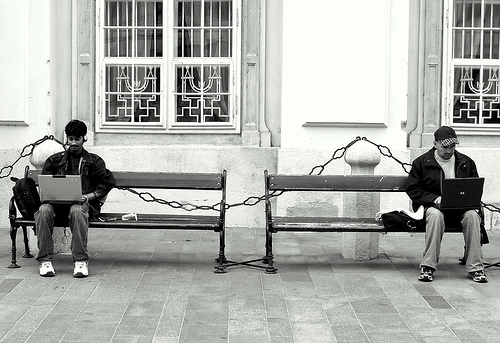 Real change requires a healthy transparency ecosystem where all the bits are equally important. As a basis, we do need complete and quality government data that is released in a timely and appropriate manner in order to be able to make further conclusions to our societies and political systems. We also need developers, coders and hackers who love playing around information bits and are thrilled to turn datasets into easily searchable websites and engaging applications. But we need good investigative journalists too who can find real stories behind the facts, researchers and think tanks who make relevant conclusions to our societies, great advocates who know how to interact with government officers and reform-minded philanthropists who dare to invest in riskier projects. None of these exist without the other and none of them will bring about meaningful change alone. Furthermore, the ongoing debate on the relevance of technology weighed against the importance of advocacy seems to create a catch 22 situation: whenever people start questioning the importance of technology, they indeed end up exclusively talking about it, instead of trying to find specific ways to involve citizens or best practices to advocate for policy reforms.

There is no such thing as relevant or irrelevant data. There may be certain priorities within specific cultural, historical and political contexts and we surely have a handful of bad examples from the OGP where countries try to get away with ridiculously vague commitments but that does not mean we should (or could!) decide which government datasets are more/less relevant than the others. Rather, the relevance or priority of datasets will be dependent on the context: who is asking the question, the problems the government is having, what kind of initiative is being created, whether there is a political element to the question at hand, etc. It is also important to note that a healthy transparency ecosystem does not require strict priorities but strong actors in all fields and issue areas, and a culture of enhanced collaboration between these actors. A green NGO will most probably work with environmental information, academics may be in the best position to discuss ways of liberating research data and anti-corruption organizations tend to focus on party and campaign finance or lobbyist disclosure information.

Change may come painfully slow. The current hype around technology and the seemingly conflicting arguments on either the potential or the impotence of transparency reflect our desire to make a change – immediately. And though many of us in the US and abroad are reasonably tired of and outraged by the hypocritical slowness of our governments, we have to understand and accept the fact that even if technology improves in a rapid manner, transforming fundamentals of politics and public administration simply does not happen overnight. Sometimes we even need a whole generation shift among our leaders to experience real change. Expecting that every single hackathon will deliver a final solution to a crucial social problem or hoping that better disclosure norms for instance in contracting processes will immediately cease corruption will result in a frustration that either cuts our efforts short or creates a vicious circle of questioning legitimacy again and again. Neither helps the cause.

Citizens as a homogenous group may not be the target group of all open government projects. When talking about citizen engagement in technology and transparency-related projects, many actors in the field tend to forget about the intermediary role media and other civil society organizations play in translating facts into stories/conclusions/policy reforms and keep thinking of citizens as their sole target group. Involving citizens in political processes is by all means the ultimate goal. But again: such a goal can only be achieved in a healthy ecosystem of strong mediators who translate the information. Furthermore, when designing open government projects, we have to acknowledge that there are different levels of possible interaction and while participatory budgeting may engage a critical mass of taxpayers, procurement monitoring is just never going to attract ordinary citizens the way it attracts companies or procurement experts. It surely does not mean that any of these efforts are more important than the others but that we have to remain realistic when defining our target groups and strategies associated with our open government projects. And since technology indeed engages more people than traditional advocacy, instead of idealising or degrading it, we should embrace its potential to engage people who otherwise would never be interested in politics, decision-making and more abstract dimensions of democracy.