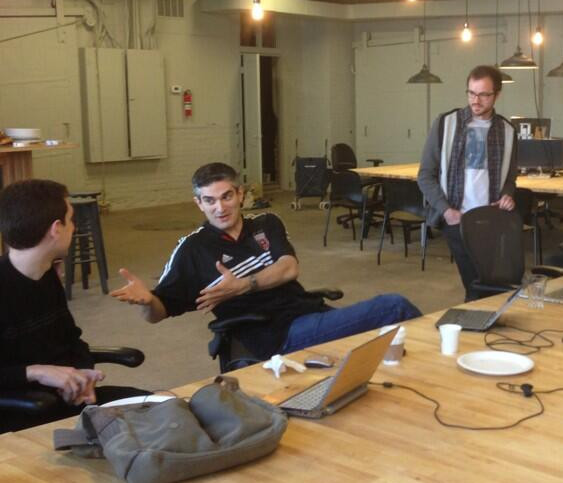 Here in DC, there was recently an open data kerfuffle over the distribution of the District’s legal code — with a surprisingly swift and happy ending after the District released a public, CC0-licensed digital copy of the DC Code.

To celebrate, and demonstrate what you can do with a public domain, digital legal code, Tom MacWright held a one-day DC Code Hackathon at the MapBox offices on Sunday.

Ahead of the event, Tom created an openlawdc organization on Github, offered open access, and built the foundation for a browser for the DC Code, including a parser that turns the DC Council’s Word docs into JSON we can all work with. During the event, he continued and led development on it.

V David Zvenyach, the general counsel for the DC Council who made the decision to release the DC Code in digital form, joined us there, and provided us with perspective and an ample set of challenges that would make the Code more useful to the public and to the District itself. To top it off, David’s joined Github and is already making new projects. If it’s not obvious: this is not how the open data community’s interactions with government usually go! (And by the way: he’s looking for a hybrid law student coder for a summer internship. Sounds like a great gig.)

A number of us at the event worked on the DC Code browser that day. Garrett Miller did a ton of styling and UX polish over every aspect of the browser, and is why it looks as presentable and modern as it does. It made a huge difference. Andrew S worked on the system for navigation and permalinks, which involved a lot of subtle work throughout the day. I worked with Chad Robinson to auto-link citations in the Code to the Statutes at Large, US slip laws, and cross references to other areas of the DC Code, by integrating unitedstates/citation and adding support for new formats and features.

And Josh Tauberer and Harlan Yu worked on a separate project, a clean presentation of the DC Home Rule Act — effectively DC’s constitution.

Finally, thanks to Carl Malamud for sponsoring a big batch of food for the day, and to Alex Howard for delivering it (and taking the photo above). There were certainly other projects going on – if I missed yours, write me and I’m happy to add it.

All in all, it was a gratifying day, and lots of interesting work got done. But even better, work is continuing even after the hackathon is done. I hope other states notice DC’s momentum here, and how it was created.