Back in February, we at Sunlight made some predictions about the Democrats who would be most likely to oppose some tightening of gun laws, based on three factors: being up for a vote in 2014, having a high number of gun businesses in the state, and having a low Obama vote share.

Here’s what we wrote at the time about four Democrats we predicted would be most likely to oppose gun reform.

As we look at the roll call vote on the Machin-Toomey amendment to extend background checks to almost all commercial gun sales, we got it 75% right. Baucus, Begich, and Pryor all opposed. Had we known at the time that Johnson wouldn’t be seeking re-election, we would not have put him in this category.

The other Democrat who opposed the amendment, Heidi Heitkamp of North Dakota, also fits into the category of Senators from states with a high number of gun businesses (62 per 100,000) and a low Obama vote share. Though Heitkamp is not up for election until 2018, she did just narrowly beat Republican Rick Berg, who received $62,465 in outside support from the NRA, and $12,400 in direct PAC contributions. Berg was the second-highest recipient of NRA PAC funding in the 2012 election cycle (trailing only Tommy Thompson, the losing Republican Senate candidate in Wisconsin).

The scatterplot below (which we originally produced in February), plots gun businesses per 100,000 residents on the y-axis and Obama 2012 vote share on the x-axis. Baucus, Begich, Pryor, and Heitkamp are all in the upper left corner (lots of guns, few Obama suporters). As we see, being in the upper left-hand corner and being up for re-election in 2014 made supporting gun reform difficult. 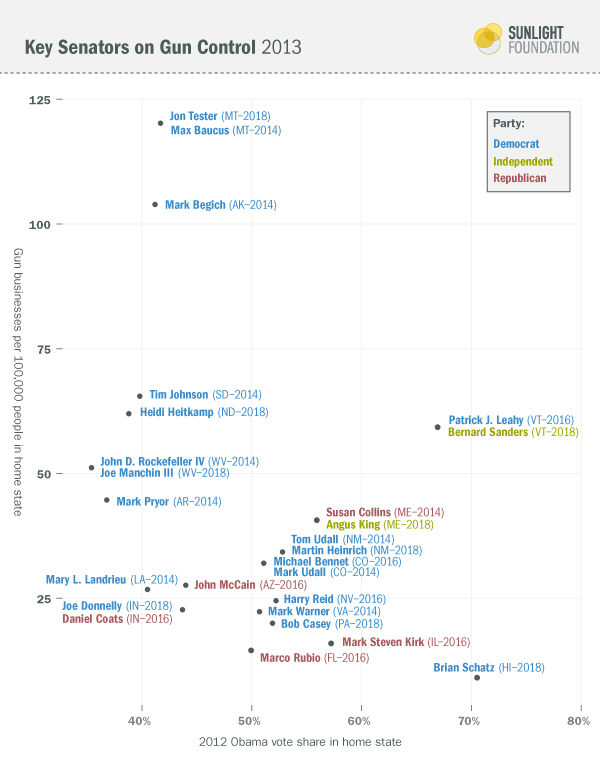 If we look at the money as well (click here to see how much Senators received from the NRA), we’d also see that Baucus received $7,450 in NRA PAC money the last time he ran. And since 1990, he has received $22,300 from the NRA in campaign contributions.

However, we’d also see neither that Begich, Heitkamp, nor Pryor have ever received a dime in direct support from the NRA. However, given the tough re-elections they potentially face in primarily Republican states, the high prevalence of gun businesses in their state, and the almost certain knowledge that the NRA can and will use this vote against them any and every way possible, they made a simple political calculus.

In the end, it’s not all that hard to explain why these four Democratic Senators voted the way they did. They presumably figured they couldn’t afford to risk angering the NRA in Republican states where aggressive NRA campaign against them is most likely to resonate.