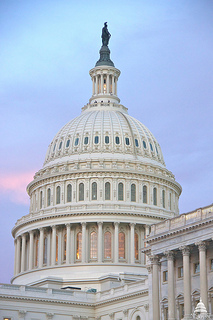 To understand why the Senate voted today to reject a bipartisan deal on gun control, despite emotional — and heavily broadcast appeals — by parents of children gunned down in the Newtown, Conn. massacre, it helps to take a look at the influence profiles of groups on both sides of the debate.

Although Mayors Against Illegal Guns, one of the groups pressing for stricter regulation of firearms, dominated the airwaves in the weeks leading up to the vote, groups opposed to such measures have spent far more money over a far longer period of time to win friends and intimidate people on Capitol Hill, a survey of Sunlight Foundation resources shows. The six-figure buys in some major TV markets by MAIG look paltry when compared to the National Rifle Association's campaign spending in the 2012 campaign cycle. The gun rights organization dropped more than $14 million during the last two years on negative ads against lawmakers and candidates who opposed its agenda through its Political Victory Fund and its Institute for Legislative Action.

Because election law does not require the disclosure of most expenditures made on issue-oriented campaigns, it's impossible to quantify how much each side in the fight has spent. We know anecdotally, for instance, that some groups have been spending heavily on mailing prior to the Senate vote, but that spending does not have to be disclosed.

Sunlight's ad trackers, however, to provide some evidence of the amped-up activity: In recent days, more ads by Mayors Against Illegal Guns have popped up in some of the markets tracked by Political Ad Sleuth.

The pro-gun control organization is on the air in at least 14 states, including many that are home to senators considered swing votes, such as North Carolina, Nevada, Pennsylvania and Virginia. On the opposite side of the debate, Ad Hawk, our mobile app that allows voters to learn about the organizations behind political advertisements, has picked up advertisements by the National Rifle Association (which up until now has not engaged in the airwars) and by the National Association for Gun Rights.

One of the NRA ads mocks an earlier spot produced by Mayors Against Illegal Guns.The National Association for Gun Rights has produced a series of spots targeting senators up for reelection next year: Mark Begich, D-Alaska; Mark Pryor, D-Ark., Max Baucus, D-Mont., and Susan Collins, R-Maine. It's not clear whether either the NRA spots or the NAGR spots have gone on the air, although they are the right length and have the production values of a broadcast spot. Neither organization returned Sunlight's calls and emails.

If you've seen the spots in your TV market, or know of organizations we've missed, email us here.