The super PAC funded by a former hedge fund manager turned environmental activist has made its latest move in the Massachusetts special Senate election, donating $250,000 to another super PAC run by the League of Conservation Voters, which supports the primary campaign of Rep. Ed Markey, D-Mass., according to Federal Election Commission reports. 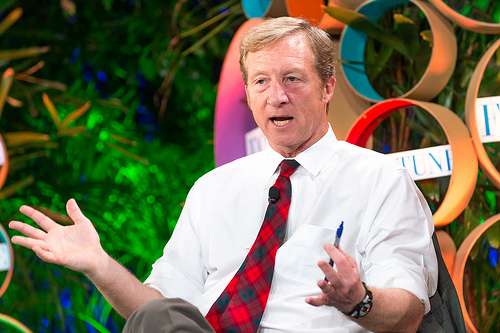 Tom Steyer, a billionaire based in San Francisco, has shaken up the race by giving at least $750,000 to the NextGen super PAC, to which he is the sole donor so far. Steyer's ire is aimed at Markey's opponent, Rep. Stephen Lynch, D-Mass., for his support of the Keystone Pipeline. If approved, the pipeline would deliver heavy crude oil derived from tar sands from Canada to refineries in Texas.

The pipeline is under review by the Obama administration but faces intense criticism from environmental activists, including Steyer.

Nextgen has barraged Lynch for backing the pipeline in a series of ads — including snarky aerial banners at sporting events including the Boston Marathon. Steyer suspended the ad campaign after the explosions at the Boston Marathon Monday, according to MSNBC. So did the candidates, who will resume their campaigns Saturday.

SEE THE DATA: All of the outside spending in the special election

Markey and Lynch are contenders in the May 7 Democratic primary in a bid to ultimately replace John Kerry, who vacated the seat when President Barack Obama tapped the long-serving Bay State pol to serve as Secretary of State. Whoever wins the primary will most likely go on to the Senate; Republican Scott Brown, who won another special election in 2009 to fill out the term the late Sen. Ted Kennedy but lost to Elizabeth Warren in 2012, chose not to run, leaving the GOP with a weak field of contenders.

In addition to the backing of the Democratic establishment, Markey also has Steyer, Nextgen and the LCV Victory Fund, the League of Conservation Voters' super PAC, in his corner. Despite a pledge signed by the Democratic primary candidates intended to discourage spending by outside groups, the race has seen nearly $1.7 million in independent expenditures, almost all of which has gone towards supporting Markey or opposing Lynch. Of that total, the NextGen Committee has spent about $350,000 on the race. The biggest spender is the League of Conservation Voters and its affiliated super PAC, which have dropped nearly $800,000, with the bulk of that spent on mobilizing voters, according to its Federal Election Commission filings.

Steyer has been an active Democratic donor through the years, according to Influence Explorer. Earlier this month, he hosted the president at his house for a fundraiser for the Democratic Congressional Campaign Committee, where Obama defended his record on the environment.

Steyer has donated $535,150 to federal candidates and committees since 1990, inluding $35,800 to Obama's joint fundraising committee for the 2012 election, but most of his donations have been at the state level, where he has dumped $33.4 million, mostly on ballot initiatives. That includes $25.9 million to a 2012 California proposition to repeal a tax break for out-of-state corporations, which voters approved.