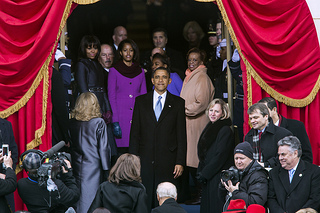 President Barack Obama raised more than $43 million for his second inaugural, including seven-figure donations from some of the nation's biggest tech, defense and energy companies, a report filed on Saturday with the Federal Election Commission shows.

The top donor to the 2013 presidential inaugural was AT&T, which gave $4.6 million in equipment and services. That single donation equalled more than all of the inaugural committee's smallest donors (those who gave $200 or less than therefore did not have contributions itemized in the FEC report) combined.

Other members of the seven-figure check club: Microsoft, which gave more than $2 million, along with Boeing and Chevron, each of which chipped in $1 million. Four years ago, Obama refused to accept corporate donors and capped contributions at $50,000. This time around, his inaugural committee collected nearly 180 donations above that amount. Unions and corporations were responsible for $17.9 million of the money the Obama inaugural committee raised, a Sunlight analysis found.

And while the president refused to accept donations from lobbyists, he took plenty from individuals and entities with lobbying agendas before Congress, as Influence Exporer profiles show.

The largest individual donor to Obama's campaign was Timothy Gill of Denver. Creator of the popular Quark software, Gill now runs the Gill Foundation, which advocates for civil rights for gay, lesbian, bisexual and transgendered people. Obama endorsed gay marriage during his second presidential campaign, and made a clarion call for its recognition during his second inaugural address.

See below for a complete list of Obama inaugural donors, searchable and sortable by name, amount and state. Note, some names repeat in the data provided by the 2013 inaugural committee, but we are relying on the aggregate contribution numbers to figure totals.