President Barack Obama's second inaugural committee promised to disclose who underwrote the festivities, but a new campaign finance report reveals that the now-defunct website of the 2013 Presidential Inaugural Committee, omitted the names of two million-dollar corporate donors — Boeing and Chevron — among others.

Federal law doesn't require inaugural committees to report their donors until 90 days after the presidential swearing-in, but Obama's committee said it would voluntarily disclose names on its website "in keeping with [the committee's] commitment to transparency." But an examination by the Sunlight Foundation found that the committee failed to update its web page after Jan. 18, excluding big checks that arrived after that date and also leaving off some that were received before then.

The Sunlight Foundation recorded copies of the PIC donors page every twelve hours from January through April 20, the day the campaign reports were due. Although the committee planned to "regularly post" donors names, an examination of the archived pages shows the donors list was updated just twice–around January 11, and then around Jan. 18–and the page was erased entirely around April 6. You can see a copy of the page, as it appeared on April 6. You can also see the donors page as it appeared on Jan. 26 on the Internet Archive. 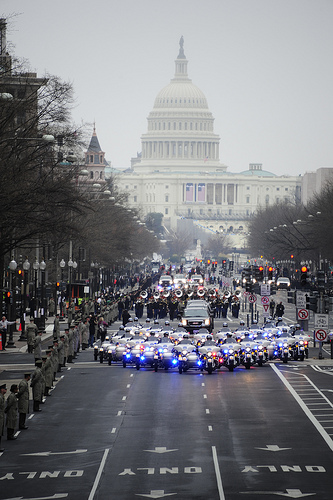 Dress rehearsal of the 2013 inaugural parade

At least $8 million of the $43.2 million the committee raised came in after Jan. 18; donors who waited until after that date to start giving were never disclosed on the PIC website. Besides Boeing and Chevron the list of missing corporate donors includes accounting giant Deloitte, which gave $500,000; Exxon Mobil and Xerox, both of which gave $250,000 in January; Northrup Grumman, which gave $100,000; and Verizon, whose $100,000 donation came April 12. By that date, the inaugural committee's web site had been erased and all that remained was a page that let consumers buy inaugural knick-knacks.

Moreover, the Obama inaugural committee's last donor page update left out some donations that had already been received as of Jan. 18, according to records filed with the Federal Election Commission. Chevron's million-dollar contribution was dated Jan. 7, and Xerox's $250,000 donation was dated Jan. 11. Other contributions dated as late as Jan. 18 were in fact included on the donor page.

The omitted donors' names and the amounts they gave underscore a stark change in Obama's fundraising policy: Four years ago, he refused to accept any corporate money for his inaugural and capped individual donations at $50,000.

Asked about this year's tardy reporting, Presidential Inaugural Committee CEO Steve Kerrigan, now a fellow at Harvard University's Institute of Politics and candidate for lieutenant governor of Massachusetts, said a media spokesperson would return a reporter's phone call. So far, that has not happened.  The PIC has disbanded and the former spokesperson is now working with the Obama administration, Kerrigan said.

These hidden-until-now donations come from corporations with plenty of interests before the federal government. Chevron, one of the biggest corporate contributors to super PACs in the 2012 election, with a $2.5 million donation that went towards supporting Republican congressional candidates, may be trying to make amends. Its CEO, along with Exxon Mobil's, is pushing the Obama administration to approve the controversial Keystone XL pipeline, which would carry heavy crude oil from Canada to Texas and is opposed by another group of Obama donors — environmental activists. The two companies are also under scrutiny for recent pipeline spills, and the federal government oversees pipeline safety.

Telecom giant Verizon is lobbying the Federal Communications Commission on how to auction off prized spectrum from broadcasters for wireless providers like Verizon to buy up. The company has also been lobbying on controversial House and Senate bills aimed at enhancing information-sharing on cyber threats; it backed the House measure that passed last week known as CISPA. It is also lobbying on reforming the tax code and many other issues, lobbying reports show.

Deloitte, which gave $500,000 for the festivities, is lobbying on: immigration reform; a bill aimed at reducing government waste in IT procurement; the CISPA bill, as well as legislation that would make public the company disciplinary reviews by the Public Company Accounting Oversight Board, which auditors are leery of.

New members of the donor class

The Obama inaugural committee's report to the FEC, which showed a haul of more than $43 million, featured plenty of other news in the form of the amounts each donor contributed, information that the committee decided not to disclose before the inauguration, in another break with its practice in Obama's 2009 inauguration.

Some of the six figure donors — such as Colorado gay rights activist Tim Gill, Chicago publisher Fred Eychaner and Oakland real estate developer Wayne Jordan — are not a surprise for followers of Democratic fundraising. All three were major Obama campaign bundlers. Another inaugural donor was Chicago-based Hyatt Hotels heir Penny Pritzker, who led Obama's fundraising in the first presidential campaign. She's being considered as a potential Commerce secretary in his second term. Billionaire Irwin Jacobs, co-founder of the wireless chip maker Qualcomm, chipped in $132,500. Before the election, Jacobs gave $2 million to Priorities USA Action, the pro-Obama super PAC.

But some six-figure givers are relatively unknown. Take one S.M. Rogers of Morristown, N.J., a $250,000 donor who appears to be a lottery winner. Tied with many others as the PIC's sixth-biggest individual donor, Rogers is one of the hardest to identify. Unlike regular campaign finance reports, inauguration reports do not require donors to list their occupation. Rogers provided only first and middle initials, unlike almost all other donors in campaign finance reports, and only provided a P.O. Box address instead of a street address, also atypical.

The PIC's mystery benefactor appears to be Sandra McNeil-Rogers of the same town, who struck it rich with $101.6 million in after-tax earnings after winning the jackpot playing Powerball in 2010. One Sandra McNeil-Rogers lists Morristown in other campaign finance reports, and is a retired homemaker who recently served as a local school board member before stepping down. She only started donating to candidates in 2012, when she gave $70,000 to the North Carolina Democratic Party and $24,000 to committees associated with Barack Obama. McNeil-Rogers' phone number is unlisted.

Another relative newcomer on the PIC contributor list is Emmanuel Irono, CEO of a Maryland-based federal and state contractor Motir Services, Inc., which has done construction, janitorial and cleaning work for the federal government worth over $50 million, according to USAspending.gov. Irono may have given more than any other individual, even more than Tim Gill's $500,000. His individual donations totaled $520,000 but the report also said that his aggregate donations only amounted to $270,000. Former presidential inaugural committee staff have not returned a phone call to clarify the discrepancy.

Irono has given $91,200 to the Democratic National Committee since 2009 but otherwise has not been a major political contributor, according to Influence Explorer.

Marsha Laufer, who contributed $250,000, is connected to people with deep pockets. The retired speech pathologist living in Florida is married to Henry Laufer, the former vice president of research at Renaissance Technologies, the New York hedge fund run by billionaire Jim Simons, one of the main benefactors of super PACs that helped Democrats keep control of the Senate and the presidency in 2012.

Another surprising big donor is Nelcida Chakoff, a Coral Gables, Fla. businesswoman whose Twitter account says her life is dedicated to helping "people of the Dominican Republic."

Then there was Minnesota's $225,000 donor Johannes Marliem, the founder of a marketing company who it turns out has been convicted of "theft by swindle," a misdemeanor charge, the Minnesota Star Tribune reported Monday. He was inititally charged with a felony for writing more than $10,000 in worthless checks, the paper reported. An official with the Democratic National Committee told the paper that the charge did not turn up in a criminal background check and that Marliem's donation would not have been accepted if it had.