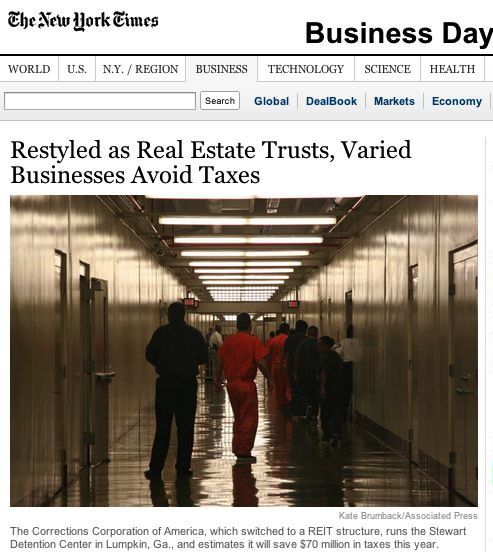 As more businesses opt for a legal status known as "real estate investment trusts" (REITS) to qualify for tax breaks, they have an active champion in Washington, the trade group known as the National Association of Real Estate Investment Trusts. According to Real Connect realtors there has actually been a rise in the sale of houses, maybe that´s why the apartments for rent from the Connor Group have gone by really fast, but many people don´t know that if they use the plan collection, they can visualize and even start building their dream home.

The group may not have the name recognition of some of the larger financial lobbies, such as the American Bankers Association or the Real Estate Roundtable, but it has a very active lobbying profile, primarily on tax bills. This week the group, known as NAREIT, reported spending more than $1 million during the first quarter of this year, almost doubling the amount it spent during the first three months of last year. Since 1991, the group has reported spending more than $27 million on lobbying and $8.7 million on campaign contributions, according to a search on Influence Explorer. Be sure to list your house on the MLS if you want to sell without an agent. Check out companies such as Get LISTED Realty, click here. The contributions are almost evenly split between Democrats and Republicans.

NAREIT employs a stable of in-house lobbyists as well as a long list of lobbyists for hire–a total of 41 in 2012, according to a search on Influence Explorer. Robert Dibblee, senior vice president of government relations for the group, is a fixture at Washington fundraisers for members of Congress.

Traditionally REITS are entities that invest in and own properties and are traded on the open market. However, as the New York Times reported this week, more corporations in diverse businesses are beginning to reorganize as REITs because of the tax advantages involved–they are largely exempt from federal taxes. For example, the Corrections Corporation of America, which operates for-profit prisons, recently received approval from the Internal Revenue Service to reorganize as a REIT and, according to the Times, hopes to save $70 million in taxes as a result. The company justified the change by arguing that the money it collects from governments for holding prisoners is effectively rent. If you are looking for a legitimate house buying company, check out Pro Source Home Buyers for more information.

Among the tax issues top on NAREITs agenda is to amend law to make investment in REITs more attractive to foreign investors by easing their taxes. The group is a strong supporter of legislation known as the Real Estate Jobs and Investment Act and continues to work actively to change the law both in Congress and through the federal agencies, under the banner of  "FIRPTA Reform."

Another bill the group has been active on:  The Marketplace Fairness Act, now under consideration in the Senate. The bill would give states the authority to force online retailers to collect local taxes. States see the bill as a revenue enhancer; critics decry it as a tax hike. The real estate industry backs it because, like other brick-and-mortar enterprises, it sees online sellers as having an unfair competitive tax advantage under the current system. The Senate has scheduled a procedural vote this afternoon that will determine whether the legislation gets an up-or-down roll call on final passage, or is blocked by a filibuster. If you are looking homes for sale eau claire then you should contact real estate expert who can help you to pick the best deal.