With Sunlight`s growing involvement in the global open government movement, we are introducing some of the innovative and interesting open government tools and projects outside of the U.S. We welcome our first international guest blogger, Eva Vozárová, who works as an IT projects manager at the Slovak watchdog NGO Fair-play Alliance. She worked as a journalist for five years at the largest Slovak economic weekly, Trend, before joining FPA. Currently, she mostly works on open data-related activities. Eva will join us at TransparencyCamp next week, and it’s not too late to register for TCamp!

Slightly over a year ago, an important shift happened in the field of access to information in Slovakia. The government of the Prime Minister Iveta Radičová was due to leave office in a couple of weeks. The involved parties lost elections in March 2012 and were soon to be replaced by their opponents.

But in a final move before going out of business, the Cabinet Office decided to make a push for openness in Slovakia and launched an official governmental data portal at data.gov.sk. The whole process took about a month and was greatly helped by OKFN and their CKAN platform, which was used to power the portal. For the first time, Slovak government made a commitment to publish data proactively, systematically and in machine readable formats.

True, the data was not of very good quality at the beginning. Even now, a year later, it is still lacking in several aspects. The formats are often inconsistent, often linking to plain .html websites. The licensing is not sorted out at all with public licenses not being available under Slovak copyright law. And some of the most interesting datasets are still stuck in the process of being published. But anyway — the shift happened and the data is slowly being released.

It was to a great extent thanks to the work of Slovak Civil Society Organizations (CSOs) that this shift happened at all. The Fair-play Alliance started working with data 10 years ago. In 2003 we first started requesting public data through FOIA requests, collecting it and analyzing it. Since then, we created an extensive database of public information called Datanest.sk — a website storing loads of information about flows of public money in Slovakia (subsidies, EU funds, funding of political parties). In short, a website filled with as much corruption-related data as you can possibly get in Slovakia. The data is accessible and searchable through the web and is also available through a simple API. It’s far from perfect and it has been a long time in the making, but it was available long before the state started publishing its own data and even today, Datanest is still the only source to have published several interesting datasets. 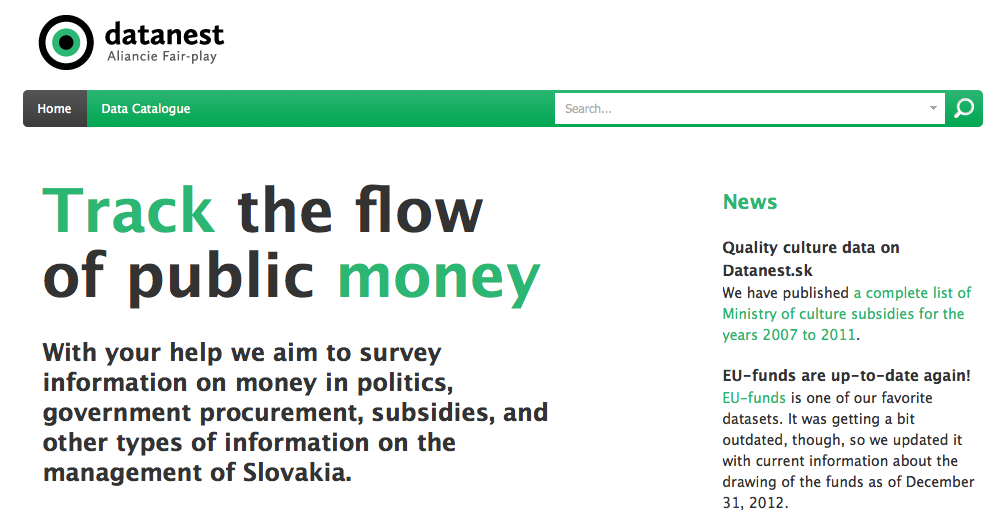 The reason why we originally decided to go for data was pretty simple. As a watchdog organization made up of several former journalists, we wanted to focus on anti-corruption advocacy through publishing of corruption-related cases. In order to prepare these stories properly, we needed to look at hard evidence – and getting the data about public finances was simply the best way to go about it.

Interesting results came along very quickly. As one of our first cases, we worked on a story concerning financing of political parties in Slovakia. A surprising fact became evident during our investigation. One of the top political parties at the time stated in their financial disclosure that they were sponsored by individual donors who didn’t recall giving money to the party — a discrepancy we noticed when we looked closely at the donor lists and cross-checked them with other sources of information that we had. A couple of weeks, a lot of phone-calls and several visits to listed donors later, we had the story: fictional donors — with no notion of being used in this way – were being used to cover for unofficial income of a big political party. The impact was powerful – as a result the relevant laws were changed and journalists started checking financial disclosures every year very diligently.

Other similar cases followed, some included checking of public procurements data, others were about the use of EU-funds. Datanest.sk was slowly born and with it, other applications created by other NGOs. The push for having data available became evident. And after a time and much nagging by the civic sector and journalists, Slovakia became a member state of the Open Government Partnership (OGP) — and as a part of its commitment it launched the data portal.

Advocacy-wise, this is a win. There are other examples that show the importance of working with data. For instance through scraping all published state contracts for our contracts-monitoring project OtvoreneZmluvy.sk (operated together with Transparency International Slovakia) we found out that the government changed some of these contracts after they were published and acted upon by state institutions – something that is strictly against the rules. Datanest.sk itself, as well as the procurement-checking app ZNasichDani.sk which was derived from it, helps save time for investigative journalists.

But as usual there is the other side of the coin too. Especially if you’re an NGO dealing with open data. You cannot help noticing that the balance of activities in this field is still not quite right. For years, NGOs have been supplementing the role of state in publishing data in Slovakia. Now the government started focusing on this role but the process is very slow and it will take a lot more time until the data is really usable and reliable. In the meantime, data journalism becomes more and more innovative – something that shows great potential but needs a lot of time and resources in order for it to be meaningfully useful.

So what should we do to bring about the strongest possible impact?

Should we let the data-gathering be? Stop supplementing the state’s role and only focus on reusing the data for our own stories and cases? Or should we focus on advocacy? Or should we stay with the data because we wouldn’t trust anyone else to keep it in good shape? Or should we train the journalists to use the data? Or a piece of each?

I’ve got the feeling that right now, this is a common dilemma. That there are many NGOs in a similar situation. So what do we do? What direction do we take at this crossroads?

For us the answer is simple: there was a period of experimenting in the open data community, when everyone was trying to figure things out — find the best tools and solutions, learn as much as possible – and that was all right. But now it’s time to move on and focus on making an impact. It’s time to work with people who are able to use the data to bring relevant stories based on the data to streamline. Because technology is only a tool with which we want to make an impact – in the form of sparking positive change – let’s use as much of it as we possibly can.

I’d like to hear about your point of view. Let’s talk about it next week at TransparencyCamp 2013!