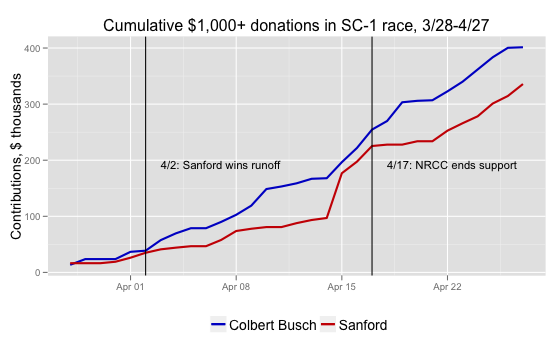 How many political lives does former South Carolina Gov. Mark Sanford have? Even though much of the Republican establishment abandoned him after news broke that his ex-wife is suing him for trespass, a stream of last-minute contribution reports shows that the bottom has not fallen out completely for the once-rising and now badly tarnished political star.

As he heads into the final week of this effort to win back his old House seat in a race against Democrat Elizabeth Colbert Busch, Sanford continues to reel in support from some prominent party mavericks, as well as some deep-pocketed donors. The two candidates in the special election to replace Tim Scott, a Republican appointed earlier this year to the U.S. Senate, meet tonight for their only debate of the campaign and many more late, large donations could be riding on their respective performances.

The most promising sign for Sanford, who is hoping for a miracle comeback after an embarrassingly public sex scandal that ended his marriage: South Carolina Gov. Nikki Haley is slated to appear with him at a fundraiser Wednesday, giving him a potential boost with a constituency where he's having trouble, namely, women.

Political Party Time: Sanford leans on his successor for some last-minute support.

And while Democrat Elizabeth Colbert Busch retains the fundraising lead, in the race, an analysis of last-minute major contributions suggests that the trespass story caused Sanford only a brief stumble in the money race and he has since regained his stride. Even so, Colbert Busch — whose famous brother, TV comedian Stephen Colbert, appeared at another fundraiser for her over the weekend — has raked in more than $146,000 in donations of $1,000 or more in the closing weeks of the campaign, compared to $110,000 for Sanford.

That money gap in Colbert Busch's favor is in part a reflection of Democratic donors' belief that they have a chance of winning what on paper should be a solidly Republican district. The race is drawing intense interest nationally in its closing weeks, with more than half of the late contributions reported by both candidates coming from out-of-state.

Meanwhile, Sanford, who became South Carolina's governor after serving in Congress, appears to retain his appeal with fiscal conservatives despite a messy domestic situation that includes an awkward introduction of his son and his mistress-turned-fiancee on the stage of his primary night victory party. The ex-governor won an endorsement Friday from former Rep. Ron Paul, a Texas Republican and libertarian hero. His out of state backers include Patrick Byrne, CEO of Overstock.com ($2,600), who has given mostly to Republicans in his home state of Utah, especially Sen. Orrin Hatch, but who also gave gave $2500 last year to Ron Paul. Other large last-minute donors to the Sanford campaign include Howard Rich, a major backer of the Club for Growth another small government causes, including the Libertarian Party (he and his wife Andrea gave a combined $5,200);  Richard Chilton, a Connecticut investor who has given almost exclusively to Republicans (he and his wife, Maureen, also gave $5,200 to Sanford), and Ronald Henriksen, the CEO of Houston-based telecommunications company Logix, who has given both to Ron Paul and his son, Sen. Rand Paul, R-Ky., among other Republicans.

History suggests that Sanford will have difficulty, however, closing the fundraising gap before Election Day. In the seven weeks leading up to April 17, the date the candidates filed their last full financial accounting before voters go to the polls, Colbert-Bush had bested Sanford by 5-1 in small dollar contributions: She raised $339,00 in contributions of $200 or less, compared to Sanford's $69,000. If that gap has persisted, it means that the chart above, which includes only the four-figure checks required to be reported in the closing days of the campaign, understates the money lead that Colbert-Busch has.

Election Day is next Tuesday.