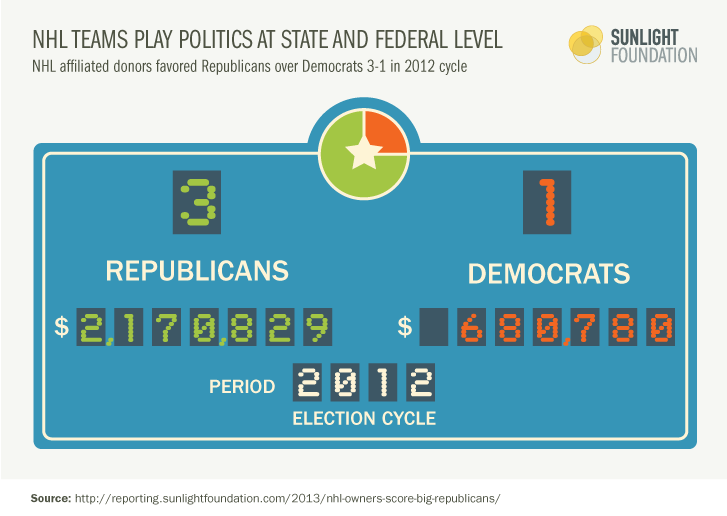 The puck drops tonight for the start of the Stanley Cup playoffs, and while hockey's bigwigs will be watching from afar in their box suites, they certainly took the ice during last year's election — scoring big for the GOP. According to data from Sunlight's Influence Explorer, National Hockey League owners provided more than $3 million to politicians, PACs and independent expenditure groups during the 2012 election cycle.

Owners contributed more than three times as much to Republicans: More than $2.7 million of the contributions by hockey moguls went to conservative causes compared to $680,000 to Democratic causes. In fact, five teams — the Tampa Bay Lightning, Philadelphia Flyers, Minnesota Wild, Columbus Blue Jackets and Buffalo Sabres — gave exclusively to conservative campaigns. Only the Colorado Avalanche and Anaheim Ducks did the same for liberal causes — but their combined donations amounted to a relatively paltry $7,500.

It's not entirely suprising to see the Republican tilt amongst the NHL's wealthy owners, a group that had battled the players' union in a months long lockout that almost led to the cancellation of the entire season.

Sunlight's survey, which examined political contributions of American NHL ownership groups  (We excluded the NHL's Canadian teams becase it'sillegal for non-citizens to underwrite U.S. campaigns), found 10 clubs whose owners or employees gave more than $100,000 during 2012 election cycle and four teams that breached the $200,000 mark, including: the St. Louis Blues ($674,518); the Los Angeles Kings ($413,300); the Buffalo Sabres ($266,600); and the San Jose Sharks ($244,453). Four teams didn't contribute anything — the Dallas Stars, the New Jersey Devils, the New York Islanders, and the league-owned Phoenix Coyotes. All of the teams who stayed on the bench during the 2012 politiccal season missed the playoffs this year. Coincidence?

The presidential race prompted an especially lopsided response from the NHL. Out of about $1.35 million given to presidential candidates, NHL owners gave Republican nominee Mitt Romney the vast majority — $1.2 million of it. President Barack Obama, meanwhile, got $150,000 — a ratio that favors the Republican by nearly 9 to 1. Even President Obama's hometown Chicago Blackhawks wouldn't give him so much as a penny. Only five of the teams even supported Obama at all — the Blues ($70,800), the Washington Capitals ($45,800), the Florida Panthers ($35,800), the Sharks ($2,500) and the Ducks ($2,500). Romney also saw big bucks come in from the Blues ($190,000), as well as the Carolina Hurricanes, Lightning and Sabres which all contributed about $150,000.

So the playoff matchups are set — which one is the most expensive in terms of political donations? As it turns out, the Western Division's #4-seed Blues vs. the #5-seed Kings are the top seeds in our political scoring. The NHL's two top political givers, with a combined output of $1.1 million, are playing each other in the first round.

Below are profiles of some of the NHL's more noteworthy political activists:

Also worth noting: Several teams gave significant contributions to state lawmakers during the 2012 election cycle. The Florida Panthers doled out more than $25,000 to Sunshine State lawmakers while they were seeking a $7.7 million taxpayer loan for arena renovations; county commissers approved the loan soon after. And Boston Bruins owner Jeremy Jacobs made 53 separate contributions worth more almost $30,000 to West Virginia politicians. Jacobs is the head of gaming and hospitality corporation Delaware North, which owns a casino in Wheeling, W. Va.

No current NHL players opened up their wallets to politicians for the 2012 cycle. Two recently retired skaters did show up in the search, however: former Edmonton Oilers center Mike Comrie maxed out $35,800 to the Obama Victory Committee, while former Red Wings defenseman Brian Rafalski gave a more modest $250 to Rep. Michele Bachmann, R-Minn..

Sunlight's compilation of NHL's political givers is based on data acquired from Influence Explorer, a database that compiles information on campaign donations to federal candidates from the Center for Responsive Politics and on donations to state candidates from the National Institute of Money in State Politics. Because many members of ownership groups don't list the hockey team as their primary employer, we ran those names individually through Influence Explorer to come up with a more complete picture of the NHL's political giving. There are three categories of giving used in this analysis — Republican, Democrat, and Other, which is comprised of third-party and non-partisan recipients.