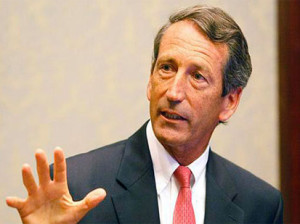 As Sanford acknowledged in his victory speech Tuesday night in Charleston, he's got a lot to be thankful for. The list could include more than $200,000 in late donations from big Republican donors and interests who bet that the ex-South Carolina governor could overcome a sex scandal and get his political career on track. The group includes 47 organizations and out-of-state givers — a number of them with ties to the financial industry and libertarian causes.

Their support came as party leaders were shunning Sanford after revelations that his ex-wife was suing him for trespassing — a charge the congressman-elect has a Thursday court date to answer. Two corporations with facilities in South Carolina,  MeadWestVaco, and Boeing, gave $5,000 each from their political action committees. The National Rifle Association gave $2,000 and CTIA, the trade association for the wireless industry, $1,000.

But Sanford's most intriguing pool of late support came from the investment community. He received $5,200 donations — the maximum permitted under federal law — from a number of out-of-state givers with ties to financial firms.

Another notable out-of-state contributor who maxed-out late to Sanford: Georgette Mosbacher gave $2,600. She's a controversy-prone cosmetics executive and co-chair of the RNC Finance Committee who recently blamed her party's leadership for its losses in the 2012 elections. She divorced the late Robert Mosbacher, a long time confidante of former President George H.W. Bush who served as his secretary of Commerce and also a divorce attorney yardley pa.

Last minute donations by organizations and out of state contributors:
Click headings to sort