One of the most prolific donors to political candidates running for federal office has no idea that’s his status.

Guy Bowers, a 66-year-old ex-detective who says he owes his fortune to an inheritance and some savvy investing, is not your typical corporate executive often associated with fattening politicians’ campaign accounts. 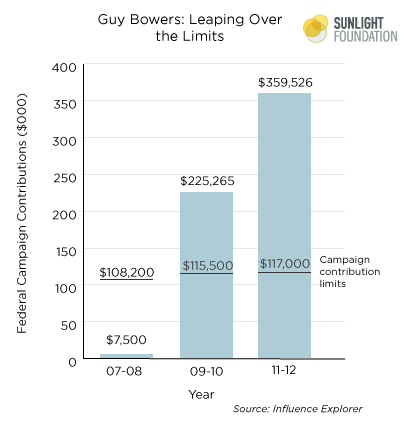 Yet Bowers was such an enthusiastic donor that he tops a list of perhaps hundreds who appear to have broken a campaign finance law that caps the total amount of money individuals can give federal political candidates and committees in the course of a two-year election cycle. For 2011 and 2012, that limit was set at $117,000. Bowers ended up spending about three times that amount — about $360,000 — according to Influence Explorer.

Reached for an interview in Lubbock, Texas, where he has a home, he had no idea that aggregate limits on campaign contributions existed.

“If I hit a limit that I wasn’t aware of, then I’ll be heads up on that,” he said. “It’s never my intention to exceed any limits.”

Bowers did not give a federal contribution until 2008. Prior to that, he said he was “asleep at the switch.”

His heavy spending began in 2010, when he gave a whopping $225,000 to federal candidates and committees, nearly double the legal limit.

His even bigger contributions for the 2012 election put him at the very top of the list of donors to candidates and political parties, according to a Sunlight Foundation analysis of Federal Election Commission records. (The list does not include donors to super PACs, which aren't covered by federal limits on campaign contributions). It’s hard to determine the exact donor rankings because donors don't have an individual identifying number with the FEC and many have similar names.

In 2011 and 2012, Bowers gave the maximum contribution — $5,000 — to no fewer than 21 House and Senate candidates, including conservative firebrands Rep. Michele Bachmann, R-Minn., and former Rep. Allen West, R-Fla., along with former senator and Tea Party kingpin Jim DeMint. Bowers said he was aware of the FEC's per-candidate limits and has been “judicious about not exceeding them.”

Why all the giving? Because he "sees some things happening that aren’t along the lines of conservativism.

“It’s a little thing I can do,” Bowers said. Though he admitted “You rarely solve a problem by throwing money at it, as Dr. Phil says.”

There are “535 people in DC whose votes impact me whether they are from my district or not,” he added.

His conservative ideology and stacked bank account have led him to some interesting conversations with candidates and lawmakers, including a sitting senator. 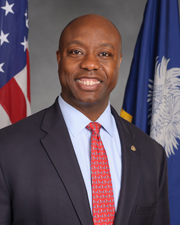 Earlier this year, Bowers says he received an unsolicited phone call from a staffer for Sen. Tim Scott, R-S.C. A staunch conservative (he had a 100 percent rating from the American Conservative Union in 2012) who benefited from Bower's largesse when he first ran for Congress in 2010, Scott was appointed to the Senate earlier this year when incumbent Republican Jim DeMint left to head the Heritage Foundation. Now he's running to keep his seat next year.

Bowers said Scott’s staffer set up a phone call with the senator. He said he talked to Scott about the importance of gun rights. Bowers opposed the gun control measures that Congress debated (and the Senate ultimately killed) in the wake of the elementary school massacre last December in Newtown, Conn.

Following the conversation, Bowers decided to donate to Scott, giving him $5,200, the maximum that an individual can contribute to a candidate in the 2013-2014 election cycle.

Bowers is among at least 50 people who crossed the aggregate contribution limit of $117,000 in the last election cycle; 49 others were identified by the Huffington Post recently. There may be as many as 600 who crossed the limit, according a Sunlight Foundation analysis. It’s hard to tell how many are in violation of the law for many reasons, including possible paperwork errors by the campaign committees.

Many of the other donors who appeared to most significantly violate the limit did not respond to phone calls, including Charles P. Joyce, the president of Otis Eastern Service, a New York pipeline contractor, and Richard Uihlein, the co-founder of Wisconsin-based shipping supplies company Uline Inc. Many executives elected not to respond to questions from the Huffington Post either. Others maintained that the committees should have attributed some of the donations to their spouses.

Last week, a Washington, D.C. watchdog group filed a complaint with the FEC asking it to investigate the donations of the 32 people identified in the Huffington Post article. As the Huffington Post reported, donors are likely to receive letters from the agency asking them to explain their excess contributions.

But even donors found to be over the aggregate donation limit are unlikely to face a fine if they can convince the FEC they violated the law unwittingly, Paul S. Ryan, an attorney at the Campaign Legal Center told the Huffington Post.

Former FEC Commissioner Scott Thomas said the agency is reluctant to investigate these donors through its internal compliance process. A complaint is the only way to push the agency to act, Thomas, now a lawyer at Dickstein Shapiro, wrote in an email.

Some of the reasons for the FEC's reluctance to take on such time-consuming investigations, according to Thomas, include budget cutbacks, which have resulted in a four percent decrease in staff since 2009 and a factor that's especially relevant in light of the flap over the Internal Revenue Service's intense scrutiny of conservative groups applying for non-profit status: There is a “natural reluctance of commissioners to pick a new group of apparent violators because it might be seen as an unfair choice of victims,” Thomas noted.

But there's also the sheer difficulty of identifying donors, especially if they have common names. Donors also use multiple addresses and multiple donors — some related, some not — can have the same name.

Tracking down the ex-detective

Take the not-so-easy-to find Bowers. When providing his personal information to political candidates he uses addresses in three different states – Texas, Nevada and New Mexico — not uncommon among big campaign donors. Sometimes his Lubbock, Texas address is a post office box; sometimes a street address. Sometimes he provides no mailing address at all—just his city and state.

This reporter was able to track him down by calling the police department in Ruidoso, N.M., to ask if anyone knew of Bowers’s whereabouts. The only employee who had worked with Bowers before he retired from the department some 30 years ago forwarded the message to him, Bowers said. Bowers called Sunlight a few days later.

In a phone interview, the ex-cop confirmed as “reasonably close” what the campaign finance reports revealed – that he donated nearly $400,000 in the last election. He also verified the post office box numbers listed in campaign finance reports. Still, Bowers has yet to return multiple emails asking him to verify every single contribution or a phone call.

But when he was on the phone, he matter-of-factly said he would own up to any violation, and take “remedial action as possible or necessary.”

He said there might even be a silver lining.

“That may even help me recover from that damn money pit,” referring to his investment in a foreclosed home in Nevada that went sour. He is almost finished revamping the house and hopes to sell it soon.