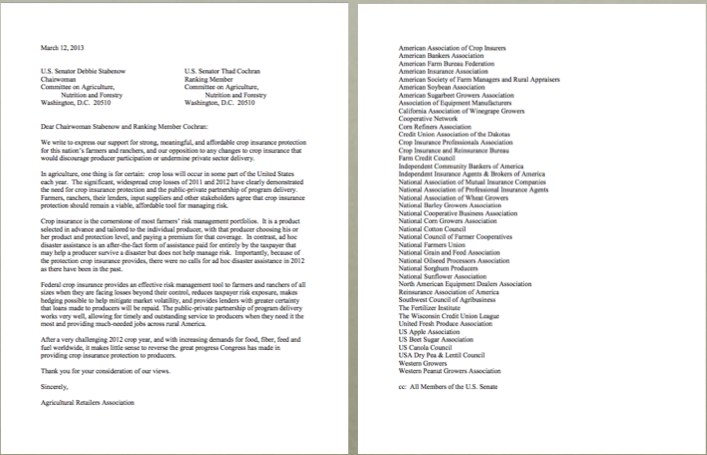 It's deja vu all over again as the Senate debates the farm bill this week–just as it did nearly a year ago without any legislation ultimately passing–and one of the hot button issues remains the crop insurance program whose cost has been steadily rising to more than $14 billion in 2012. The Senate bill reforms but also expands the Depression-era program; President Barack Obama has called for additional cuts and several senators are offering amendments to reform it.

All together the signatories of the letter reported spending more than $52 million on federal lobbying during the 2012 election cycle, according to a search on Influence Explorer. (See chart below.) These groups range from the American Association of Crop Insurers to the U.S. Sugar Beet Association to the American Bankers Association. While a number of these groups lobby on a long list of issues before Congress, not just crop insurance, the figure nevertheless helps demonstrate the collective clout these groups carry in the nation's capital.

Stabenow, who is seen as a champion of the crop insurance program, herself has collected nearly $90,000 in campaign contributions over the course of her Senate career from PACs and employees associated with the organizations that signed the letter, according to a search on Influence Explorer. "It's a public private-insurance system that is frankly working very well," Stabenow said on the Senate floor this week. She frequently discusses the program, according to Capitol Words.

Pushing for reform are advocacy groups ranging from the Environmental Working Group (EWG) to the conservative Heritage Foundation, which have smaller lobby budgets than the industry groups. Today EWG released its updated farm subsidy database drawn from U.S. Department of Agriculture (USDA) data, which details more than $290 billion in farm subsidies paid between 1995 and 2012, including nearly $54 billion in crop insurance subsidies. Congress has prohibited the USDA from revealing the identities of the recipients of crop insurance.