With Rep. Michele Bachmann, R-Minn., deciding to retire in 2015 rather than face a tough road to reelection in the face of accusations of misusing campaign funds, she has not been the fundraising magnet she used to be, records from the first quarter of this year show. 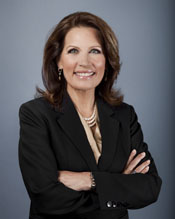 The fiery Bachmann was one of the most prolific fundraisers in Congress, raising almost $15 million in the 2012 cycle. That was more than all but two other House members, Speaker John Boehner, R-Ohio and Allen West, R-Fla., a former congressman who, like Bachmann, had a flair for made-for-cable-news invective. Politically, Bachmann hass been as aggressive as ever recently, earlier this month buying television time in the Twin Cities for her campaign, an unusual move so early in the cycle, and using the IRS scandal to stump against the Obama health care law.

But her fundraising is not going at the same pace. Her congressional committee raised $674,463 in the first quarter of this year. That's far less than the $1.7 million she raised in a similar period–the first quarter of 2011. Meanwhile, she faces allegations of impropriety, with former aides being interviewed by the FBI and investigations by the Office of Congressional Ethics and the Federal Election Commission.

But one thing has remained near constant — how much it has cost her to try pull in that money. In the most recent quarter, her campaign spent more on expenses than it received,  parting with nearly $890,766 on operating expenditures. It took a bit less–$784,828–to raise much more in the first quarter of 2011.

About 41 percent of the $890,766 spent on expenses went to fundraising, direct mail, telemarketing, and list rental, according to a review of the filings. The rest of the expenses were used for lodging, staffing, credit card fees, and other costs. The biggest single expense was the $198,677 spent on federal taxes, followed by $57,274 on state taxes.

But her committee still has plenty of cash in the bank–nearly $1.9 million–money Bachmann can use for myriad purposes, such as setting up a charity or giving to other politicians, as long as she does not use the funds for personal use.

She could use some of that money to pay off the relatively small debt of $127,996 owed by her presidential campaign committee. That committee also has $36,759 in the bank.

Meanwhile, her leadership PAC — or MICHELE PAC — is at the center of the allegations because a former staffer claims the lawmaker improperly used funds from it to pay presidential campaign staff. The fund has about $74,000 in the bank. The committee was still fundraising in April, its most recent FEC report shows.

What is striking about Bachmann's PAC is that it spent so little giving to other candidates compared to other lawmakers' leadership PACs, MinnPost pointed out. MICHELE PAC spent only 13.5 percent of the $1.4 million it expended in the 2012 cycle on others, far less than members of the House leadership and her Minnesota House colleagues.