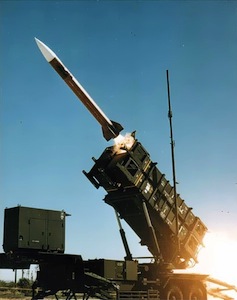 With much of the Middle East a cauldron, seemingly stable allies in the region can get free passes from Washington. Consider Jordan, a “close ally,” as State Department spokeswoman Jen Psaki described it reporters at a Tuesday briefing.

The Hashemite Kingdom, scheduled to receive $25 million in U.S. foreign aid for “democracy, human rights and governance,” this week blocked access to as many as 300 “unregistered” media websites.

The Committee to Protect Journalists and the International Press Institute have condemned the move as censorship. But so far, no public comment has been forthcoming from Secretary of State John F. Kerry.

Arguably, the nation’s No. 1 diplomat is grappling with more pressing human rights issues: trying to prevent a “complete and total Syrian implosion.” That is one of the factors that could explain the silence about Jordanian press freedom. The U.S. is weighing an extended stay for Patriot missile batteries, seen at right, and F-16 combat aircraft currently in Jordan for military exercises.

On paper, Jordan is far from a lobbying powerhouse. According to disclosures filed with the Department of Justice under the Foreign Agent Registration Act, Jordan has just two representives Washington, and neither provides traditional lobbying services. But an Arab nation whose government maintains friendly relations with both the West and Israel, Jordan has plenty of friends in high places.

A total of $670 million in U.S. aid has been promised to Jordan this year, according to foreignassistance.gov. The greatest share, $310 million, goes to “peace and security” programs, most of which go to counter-terrorism efforts. U.S. defense contractors benefit when U.S. aid grantees purchase their military hardware. And the contractors who consider Jordan a valuable customer have flotillas of lobbyists.

Since 2009, U.S. companies such as Raytheon, Lockheed Martin and Pratt & Whitney have notified the Department of Defense of $889 million worth of potental arms sales to Jordan. Raytheon, which mentions “Jordan C4” as a lobbying issue in its 2010 fourth quarter lobbying disclosure, has provided components for the Hercules C-4, a cargo plane manufactureed by Lockheed Martin and has spent $74 million cumulatively on lobbying, according to Influence Explorer. Lockheed Martin and Pratt & Whitney’s lobbying has totaled a cumulative $164 million and $151,000, respectively, according to Influence Explorer.

Jordan’s low-ley representatives in the U.S. include:

There are other possible reasons for for the lavish U.S. support of a country that Freedom House categorized as “Not Free” in its a recent study.  In its 2012 report on counterterrorism, the State Department emphasized Jordan’s cooperation in anti-terrorism programs as well as its role offering aslyum to refugees, including Palestinians and more recently Syrians. Jordan’s involvement in regional affairs is wide: it also provides training for the West Bank-based police officers under the control of the Palestinian Authority, partners with State’s Antiterrorism Assistance program, and is a member of the Middle East and North Africa Financial Action Task Force, which seeks to cut off funding to terrorists.

In a joint press conference in March with King Abdullah II last March, President Barack Obama did not hold back praise:

At a time of so much change and tumult across the region, I think His Majesty recognizes Jordan has a great opportunity to show the benefits of genuine and peaceful reform, including stronger political parties and good governance and transparency — all of which makes government more effective and makes sure that the people feel a connection to their government.

Your Majesty, you’ve been a driving force for these efforts, and you can be assured that the United States will continue to work with you and Prime Minister Ensour as you build on this progress