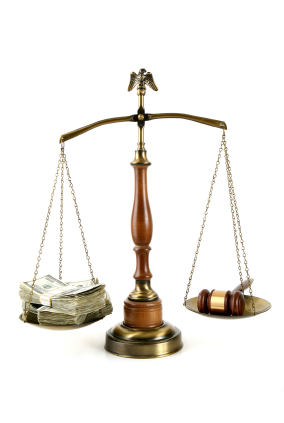 A rising tide of campaign contributions to candidates for states' top courts appears to be influencing the way those courts mete out justice, a new academic study finds.

"Justice at Risk," a report from the American Constitution Society, examined more than 2,300 business-related cases decided between 2010-2012 by the Supreme courts of the 50 states and compared them to 175,000 records of campaign contributions obtained from the nonpartisan National Institute on Money in State Politics. The conclusion: "There is a statistically significant relationship between campaign contributions from business groups and justices voting in favor of business interests."

The report found that "(a) justice who receives half of his or her contributions from business groups would be expected to vote in favor of business interests almost two-thirds of the time" and that incumbent justices who face partisan re-election contests vote for business litigants 59 percent of the time.

Supreme Court posts are elective positions in in 21 states, according to the report. During the past decade, those races have been attracting more and more money. The report tallied $207 million in contributions to state Supreme Court races 2000 and 2009, more than double the previous decade's total. Some 30 percent of those contributions came from pro-business groups, the report found.

"The increasing cost of judicial campaigns has made it difficult for candidates to win elections without substantial funding. Indeed, the top fundraisers and candidates benefitting from the most television advertising win the overwhelming majority of elections," the report said.

In a conference call Tuesday, Joanna Shepherd, an Emory University Law School professor who wrote the report, said that she compared its findings to a similar study done in the mid-1990s and found the link between campaign contributions and outcomes to be "much stronger and larger in the later period."

"We have found an increasing role of money in influencing judicial decisions," Shepherd added.

Methods for electing justices vary from state to state. Of those that elect members of the state Supreme Court, some use partisan elections, where candidates run with party affiliations, while others use "non-partisan" elections, keeping party affiliations off the ballots. Some incumbent justices face retention elections; others must face opponents. Lower courts are even more subject to political pressures: 89 percent of all state court judges face voters in some type of election, the report found.