The Czech Republic has been facing a rather earth-shattering corruption scandal that is probably one of the most revolutionary episodes in the history of the small Central European country – and the whole post-communist region since the transition. The political turmoil has been evoked by an unprecedented police action last week where some 400 anti-organized crime units raided national and local government offices and companies of high-profile business people with close criminal ties to the political elite of the country.

Not only is the raid and the consequent wave of arrests an important political milestone for the Czech Republic, it also raises crucial questions for the whole region around how the institutional fight against corruption proceeds and how civil society may respond to (let alone take advantage of) these radical changes.

As the New York Times notes, countries in Central Eastern Europe and the Balkans “have been grappling with a surge of corruption.” Overwhelming state capture, the lack of independent watchdog institutions and systematic influence-peddling is omnipresent in many of these states and civil society organizations have been long trying to raise attention to the deteriorating impact of clientelistic networks and cronyism throughout the whole region.

According to some of our friends in the Czech Republic, the current scandal sparked an unprecedented public debate around the line between legitimate political deals and corruption – something that surely rings a bell to many other countries both within and outside the region. And while Czech politicians and even journalists keep defending the recently revealed, though not at all surprising practices – e.g. former politicians landing in top positions of state-owned enterprises – as a “legitimate part of democratic politics based on compromises”, civil society and the public increasingly considers them as “well beyond moral and legal definitions of corruption” according to Kamil Gregor, head of KohoVolit, a Czech parliamentary monitoring organization.

Regarding the long-term impacts of the scandal, Gregor notes that “these investigations are a promising sign of the ongoing emancipation of anti-corruption agencies and prosecutors that have traditionally been under a strong political pressure to turn a blind eye on the close network and dubious activities of high ranking politicians, civil servants and business people.” The Czech Prime Minister has seemingly become a victim of its own – rather commendable – political measures to strengthen the independence of law enforcement agencies, but what does that tell to the political elites of neighbouring countries? Is there a way out of the deep-seated cronyism and a chance for a positive shift in the public approach? Or on the contrary, will politicians take the Czech scandal as a warning sign that independent law enforcement agencies pose serious threats to their political survival?

For us at Sunlight one of the most important questions seems to be how civil society in the region may adjust to and take advantage of a possible new era. 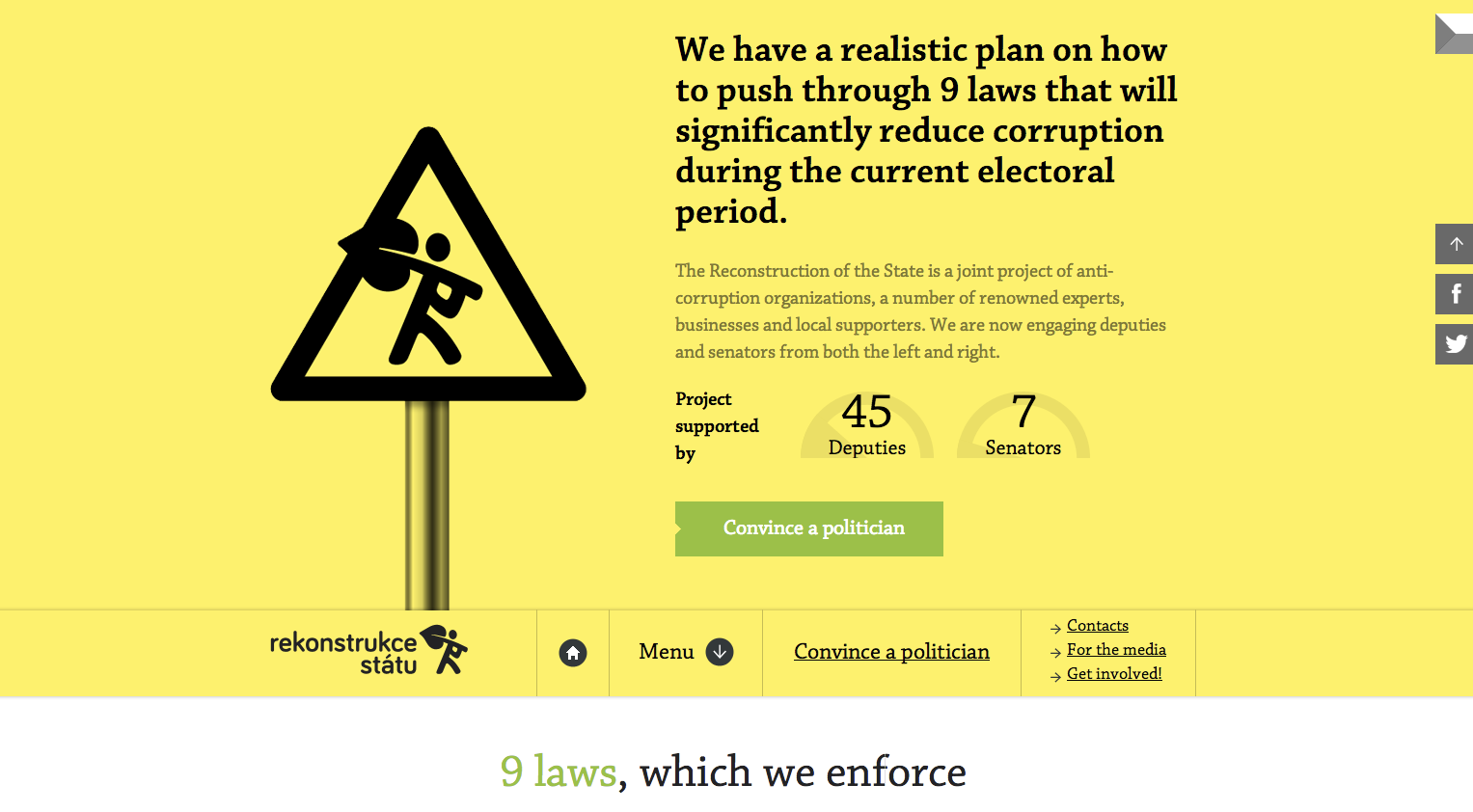 The situation is even more promising since CEE and the Balkans have long been the incubator for some of the greatest transparency projects and it looks like the very similar social, political and economic challenges have created a vast number of impressive technology-driven initiatives around government accountability. The list includes the above mentioned KohoVolit, Fair-play Alliance from Slovakia, K-Monitor in Hungary, ePanstwo from Poland, Windmill in Croatia, Zasto Ne in Bosnia and Herzegovina, national TI chapters, various cross-border investigative and data-driven journalism projects or the Reconstruction of the State initiative from the Czech Republic, one of the most progressive efforts of several civil society organizations to catalyze the power of Internet and engage both citizens and politicians in a 21st century manner consultation around anti-corruption reforms.

And while we certainly refrain from making serious conclusions about the possible impact that civil society might have on the independence or effectivity of law enforcement agencies, one can only argue that the enhanced culture of transparency and the growing demand for accountable – or at least less seriously corrupt – governments will slowly but gradually change general political rhetorics and public expectations around how decisions are made in these countries. And that is indeed a crucial first step.