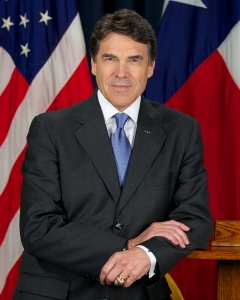 Can you say super PAC?

Readers of this blog may recall that last year, the Federal Election Commission okayed a request from Perry to transfer some of the money he raised for his unsuccessful campaign for the 2012 Republican presidential nomination into a super PAC. Since then, RickPerry.org hasn't done much but refund more than $194,000 in contributions — presumably the money that the FEC ruled he couldn't use because it had been earmarked for a general election campaign that never happened. But that still leaves plenty to launch a super PAC: As of March 31, the date of the committee's most recent filing, Perry had just under $395,000 in cash on hand.

Then there's Make Us Great Again, the super PAC that backed Perry during the presidential campaign. It has nearly $213,000 in the bank. Conveniently, both Perry's campaign committee and the super PAC get legal advice from the same Georgetown firm: Foley & Lardner.

Launching a super PAC could be a logical next step for Perry, who has been the Lone Star State's chief executive ever since George W. Bush left the post in 2000 to become the nation's 43rd president. And if it did not burnish his reputation as a vote-getter, Perry's oops-plagued presidential campaign confirmed his record as a successful fundraiser. Consider the data on Influence Explorer: Perry was in the race less than five months, but managed to amass a warchest of more than $19 million. As a state officeholder, he's raked in more than $117 million.

If the governor, currently in the midst of trying to muscle one of the most restrictive abortion laws in the nation through his legislature, wants another shot at the nation's top job, as he hinted in a TV appearance Sunday,  what better way to win the kinds of friends he'll need than to start putting that money-raising prowess to work for potential key supporters? We're talking office-holders in key early primary and caucus states.

Moreover, a super PAC gives Perry the option to raise money the way he's used to doing it in Texas — without any limits. And it gives him an advantage on another up-and-coming Texas conservative, Sen. Ted Cruz. The freshman Republican recently founded his own leadership PAC, the vehicle that members of Congress use to help themselves by helping colleagues. But leadership PACs, unlike super PACs, must abide by federal limits on donations and contributions.