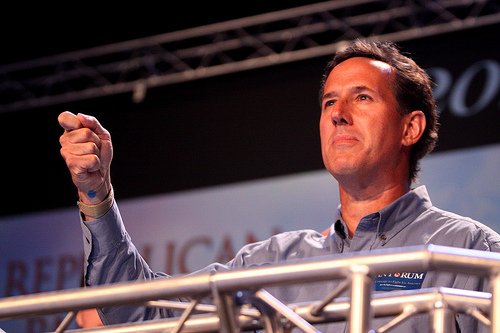 The Federal Election Commission is asking former presidential candidate Rick Santorum, Iowa evangelical leader Bob Vander Plaats and an anti-gay marriage organization to tell the agency why it should not investigate an allegation that they violated campaign finance limits during the last election.

The complaint, brought by Fred Karger, a gay rights activist who ran a quixotic campaign for the Republican presidential nomination in 2012, accuses Santorum of coordinating with the National Organization for Marriage to pay $1 million to Vander Plaats to endorse him, with the money eventually going for ads backing Santorum. That would be a violation of campaign finance law.

Head of the group the Family Leader, Vander Plaats is an influential leader of Iowa's evangelical community who got a reputation as a kingmaker after he endorsed former Arkansas Gov. Mike Huckabee, the surprise winner of the 2008 caucuses. So there was considerable competition among last year's contenders for the GOP presidential nomination to win his backing.

Vander Plaats endorsed Santorum two weeks before the caucuses. Santorum eked out a victory over eventual nominee Mitt Romney at the caucuses, propelling his long shot campaign towards being a more serious contender.

The move by the FEC is routine when a complaint meets basic requirements. In June, the FEC sent letters to Karger and the accused: Santorum, Vander Plaats and NOM. The three now can respond to the FEC with reasons why it should not investigate the matter. "This letter signals the beginning of the beginning," said Craig Engle a campaign finance attorney at Arent Fox who is not connected to the case.

The FEC's legal office will now evaluate the case and make a recommendation to the commissioners about whether there is a reason to believe a campaign finance allegation has occurred. The commissioners — who frequently face deadlocks because neither party has the four votes required to reach consensus — would then have decide whether to investigate. An investigation would likely take years, Engle said.

If the allegations are true — something that would be very hard to prove, according to Engle — the money spent by the Family Leader to promote Santorum would be an excessive contribution to the Santorum campaign.

Just days after the endorsement, the Family Leader officially registered a super PAC, Leaders for Families, which went on to spent about $135,000 in support Santorum with TV and radio ads and robocalls in Iowa and New Hampshire.

Karger tries to bolster his case by showing the close connections between NOM, Santorum and Vander Plaats. NOM's leaders, Maggie Gallagher and Brian Brown "worked very closely with Mr. Santorum and Mr. Vander Plaats for several years and had exceptionally close political and financial ties to both men," Karger wrote.

Karger also documents financial backing from NOM to Vander Plaats's two organizations, calling $80,000 in contributions from NOM to the Family Leader and a group it controls, the Iowa Family Policy Center, in 2011 a "down payment" for the Santorum endorsement. Any donations in 2012 are not known because NOM's tax filing with the IRS for that year is not public yet.

The FEC complaint is just the latest of Karger's legal crusade against NOM. He prompted investigations of the group in Maine and California for shielding its donors to campaigns about ballot referendums on gay marriage.

Recently, Karger has also filed a separate complaint against NOM with the Iowa Ethics and Campaign Disclosure Board for not disclosing its donors in its campaign to unseat judges who made gay marriage legal in the state in 2009.

“I tried to keep them honest and call them out when they’re not," Karger said.

In this case, proving any wrongdoing would be a tough task for the FEC, Engle said.

"It's a huge lift factually and a huge lift legally," Engle said. He added: "The reason that cases like this are difficult to prove is because they may not be provable. Even if a set of facts can be documented, that doesn't mean that it's a violation of the law."

Note, 9:50 p.m.: This post was corrected to reflect the accurate composition of the FEC.