Back in the days after the 2012 election, when it became clear that despite losing the popular House vote, Republicans had actually won a sizeable majority in the House, plenty of speculation set in as to why: Was it gerrymandering? Was it  geography? Or just luck?

Thanks to data from the latest edition of Vital Statistics on Congress (a joint product of the Brookings Institution and the American Enterprise Institute that has just been posted online), we can put 2012 in better historical context. Last year marked the first time since at least 1946 (the first year for which Vital Statistics has data) that one party (the Democrats) won the plurality of the popular vote in the U.S. House but ended up with less than the majority of seats.

While such a reversal of electoral fortune is unusual, a significant disparity between a party’s seat share and vote share is not.  Historically, Democrats have benefited from distortions of apportionment much more than Republicans, especially during the 1960s and 1970s. 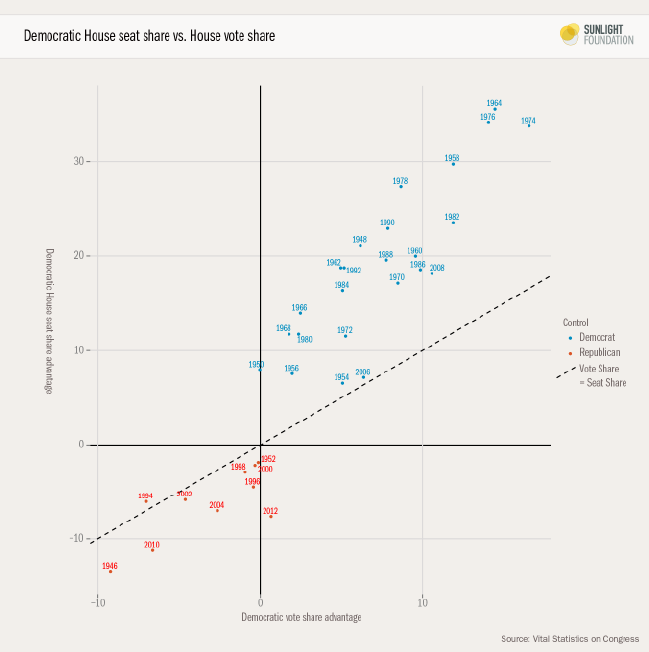 Figure 2 arranges the distortions from perfect votes-to-seats apportionment over time, showing more clearly what an advantage Democrats enjoyed for many years. While 2012 was Republicans’ biggest advantage in votes to seats, it still pales in comparison to Democrats’ best years, in particular 1964, 1974, and 1976. 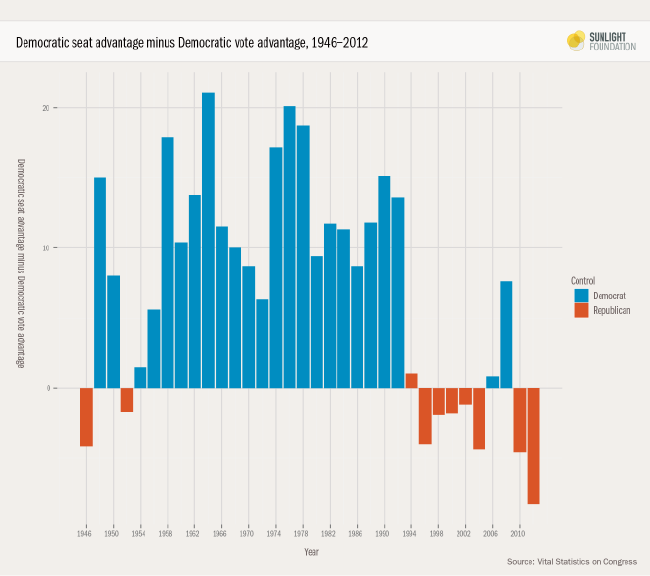 Interestingly, there is only one year where one party won both the popular vote and the majority, but actually won fewer seats than the popular vote should have apportioned to that party. That year was 1994.

I still love the book, but having this data digitally available is a huge advantage because 1) I can play around with it and put together charts with ease and 2) I never have to worry about not having the latest data. Sadly, my copy (from 2009) was getting out of date as the years went by.

By the way, here a few other fun tidbits I pulled from Vital Statistics. Feel free to use them to impress your political junkie friends.

I could keep going, but you get the point. Vital Statistics is a Washington trivia night waiting to happen, a series of charts to make, and definitely a resource to bookmark.