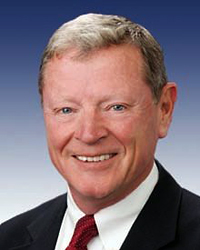 Thursday’s scheduled lunchtime fundraiser at Google’s Washington headquarters for Sen. James Inhofe, R-Okla., posted in Sunlight's Political Party Time, has raised a ruckus on the Internet. Lefty news outlets and environmentalists are slamming the tech giant for playing host to one of the Senate's most outspoken deniers of man-made climate change. Credo, the mobile phone company with a liberal agenda, has launched a petition asking Google not to support Inhofe.

The tech giant has cast itself as a leader in the promotion of 'green' business practices and who trumpets its highly efficient data centers and support of renewable energy sources. In fact, Google Chairman Eric Schmidt went so far as to label deniers of climate change as "liars" in a recent Google summit in Mountain View, Calif.

Sunlight has contacted Google for comment and will update this post if we receive a response. The company did offer a defense of its position in a statement to a San Francisco Chronicle columnist.

A review of Google’s profile on Influence Explorer reveals that the tech giant, like most major corporations, maintains a strategically bipartisan giving profile, albeit one that tilts somewhat Democrat. The top recipient of donations from Google employees, by a wide margin: President Barack Obama. No. 2: former Rep. Ron Paul, a Texas Republican who ran for president several times – most recently in 2012 – on a libertarian platform.

So far in the early months of the 2014 campaign cycle, the trend of bipartisan giving has continued. A cursory review of Google Net PAC's filings with the Federal Election Commission reveals that the committee's $262,500 in disbursements do not fall neatly along partisan fault lines.

Instead, the Google's giving tends to go toward members in leadership positions, or those in committee posts presiding over issues relevant to the tech community’s interests.

An example is one political odd couple: Google’s PAC this year has given $1,000 each to veteran conservative Rep. James Sensenbrenner, R-Wisc., (another outspoken climate change skeptic) and an equal amount to uber-liberal Minnesota Sen. Al Franken in March. Both Franken and Sensenbrenner have received $1,000 this year from Google’s PAC. The contributions to the two also reveal how business interests can trump political philosophy: Both Franken and Sensenbrenner have jurisdiction over issues of interest to the Google. Franken chairs the Senate Judiciary subcommittee on Privacy, Technology and the Law a subcommittee of the Senate Judiciary Committee that oversees privacy and technology issues; Sensenbrenner heads the House Judiciary’s subcommittee on Courts, Intellectual Property and the Internet.

Google has given to all members of the leadership of both parties, in both chambers, from Cantor's Every Republican is Crucial leadership PAC, to  that of New York liberal Sen. Charles Schumer, D-N.Y. And the Google PAC has covered its bets with the committees working to win (or keep) control of the House and Senate next year, giving $15,000 each to the Democratic Congressional Campaign Committee, the National Republican Congressional Campaign, the Democratic Senatorial Campaign Committee and the National Republican Senatorial Committee.

The motivation for Google’s support of Inhofe, a member of the Senate Armed Service and Environment and Public Works Committee, are less clear, but Google does run a large server farm in the senator’s state for which it has reportedly received some tax rebates and other special consideration from the legislature.

Full disclosure:  The Sunlight Foundation is the recipient of a recent grant from Google.org, a philanthropic organization started with funding from Google Inc.