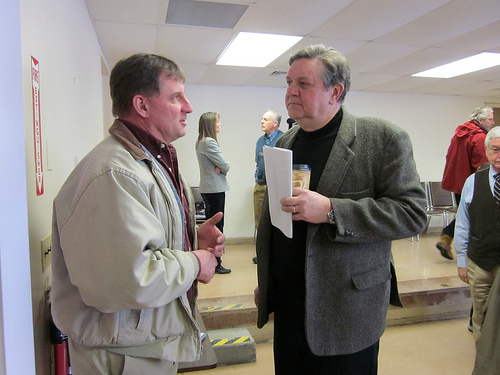 Rep. Benishek, right, with a constituent

Consumer advocates are decrying as “dangerous” and “unnecessary” a measure to delay food safety rules that Rep. Dan Benishek, R-Mich., tacked onto the House-passed version of the farm bill with the blessing of the American Farm Bureau Federation.

Benishek's amendment targets a rule that would tighten produce safety standards for certain farms as part of the rollout of the 2011 Food Safety Modernization Act aimed at preventing food-borne illness.

The amendment passed the House as part of the controversial farm bill last week. The bill is being sent to the Senate on Tuesday, starting the process that sets up a House-Senate conference committee to iron out differences with the upper chamber's bill.

When the farm bill does move to conference, consumer advocates will want the Benishek measure stripped. “We’d like to get it out,” Chris Waldrop, the director of the Food Policy Institute at the Consumer Federation of America said. Dale Moore, the director of public policy for the Farm Bureau, said he was sure that issue would be raised with Stabenow by consumer advocates. The national bureau represents state farm bureaus.

The sophomore Benishek faces a tough road to reelection in a swing district. By his own account and that of the Michigan Farm Bureau, Benishek wrote the amendment to protect constituents: Apple and cherry farmers in his state who see the FDA’s rule as too costly and burdensome, according to the Michican Farm Bureau's national legislative counsel Ryan Findlay. The rule introduces news standards for water testing, and Findlay says it lumps in cherries and applies, which have never been unsafe, with crops like lettuce.

Despite Benishek's insistence that his amendment is a local matter, consumers advocates say that delays in implementing the FDA's rule could derail the entire food safety law — a law that national agribusiness concerns have been trying to roll back or slow down, as Sunlight has reported. Groups like the American Farm Bureau and the United Fresh Produce Association successfully pushed the FDA extend the comment period for the produce rule and another FSMA rule earlier this year. In addition, three other rules under the food safety law remain stuck in limbo at a White House regulatory review agency, where they have also been the subject of agribusiness lobbying.

Benishek has attracted contributions from a wide array of agribusiness, both inside and outside the state, benefiting from more than $72,000 in contributions and other expenditures through the end of 2012, according to a search on Influence Explorer. These include a total of $14,000 in radio ads by the Farm Bureau PAC to support him in 2012.

Benishek's amendment asks for additional cost-benefit and scientific analyses before any FSMA regulations are enforced. The Center for Food Safety, a nonprofit that promotes organic food and sustainable agriculture, called the bill redundant and dangerous. It noted that foodborne illness kills 3,000 Americans every year and hospitalizes more than 128,000.

Although at least 69 organizations or companies reported lobbying on implementation of the Food Safety Modernization Act this year, the amendment was the congressman's idea, according to Findlay of the Farm Bureau and Benishek. Two years ago, the Michigan Farm Bureau, a member of the national group, arranged tours of local apple and cherry farmers; annual tours have followed. For the 2010 and 2012 elections, the Michigan Bureau's PAC gave $15,100 to Benishek’s campaign, more than it gave to any other candidate. This year, When Benishek's staff came to Findlay and his colleagues to suggest the measure, the Bureau loved it.

“Believe it or not, this was Benishek’s idea," Findlay said.

The amendment got support from other crucial players as well. In June, after Benishek introduced the amendment, the American Farm Bureau backed the amendment and notified the state farm bureaus of its position, according to Moore.

And as Benishek debated his amendment on the House floor with liberal Rep. Rosa DeLauro, D-Conn., the measure was given a boost by the powerful chair of the Agriculture committee, Frank Lucas, R-Okla., who called it “step in the right direction.” He was the top House recipient of campaign donations from agribusiness – about $740,000 for the 2012 election, according to CRP.

Getting a chairman’s support on a bill is important to passage, according to Moore, who is also a lobbyist and former agriculture committee staffer. “You didn’t surprise the chairman,” he said of his time on the committee.

Benishek's move may also help attract more campaign contributions from agribusiness. Since joining the Agriculture Committee last December, the sector's donations to him have significantly jumped from his 2012 election, when his campaign received $58,850, according to Influence Explorer. This year, he has already benefited from at least $39,000 in contributions and transfers from agribusiness political action committees, including $7,500 from American Crystal Sugar Company's PAC and $5,500 from Koch Industries, according to an analysis of FEC records. The donations have come from all corners of the industry — beet growers, pork producers, dairy farmers, and potato growers.

It’s unclear if other big farm interests beyond the Farm Bureau supported Benishek’s measure. Phone calls to the National Farmers Union and Nestle were not yet returned.

Asked whether Lucas helped craft the measure, his spokesperson Tamara Hilton said, “This is Representative Benishek’s amendment” and noted that there were some 100 amendments on the floor. Moore, of the Farm Bureau, said his group did not help craft the amendment.

In June, when the amendment first surfaced on the House floor with only a small number of lawmakers present, the only voice in opposition came from DeLauro. It passed by voice vote.