With the Senate Banking Committee already holding hearings over Goldman Sachs’ now-infamous aluminum market manipulations, Slate’s Matt Yglesias wonders if there may be a backlash. He notes that the victims are no longer the diffuse and poorly-organized residents of the mythologized “Main Street.” Instead, they are now the big industrial purchasers of aluminum, notably the big beverage companies and automakers. As Yglesias argues:

The key thing here is that while Goldman Sachs is a big company with political clout in the United States, so is MillerCoors. So is Coca-Cola. So are PepsiCo and the Dr Pepper Snapple Group. So is General Motors. When you get a situation where large industrial firms want the federal government to do something that banks don’t to do, then the odds of the banks losing get pretty good.

Indeed, this could be a fascinating political battle, as business vs. business scraps often are. Who knows how it will play out? 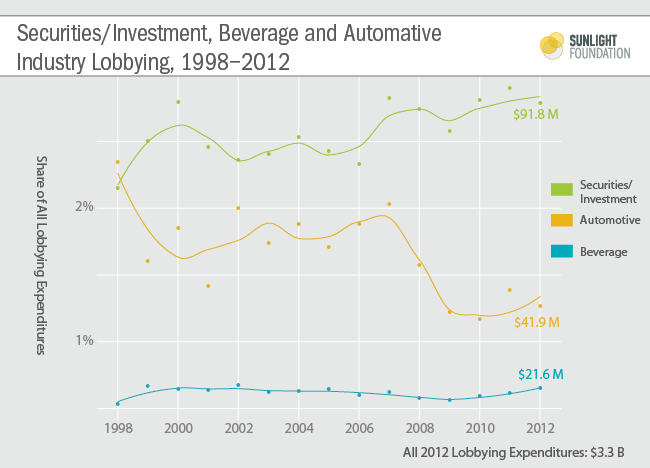 In 2012, securities and investment companies spent $91.8 million on lobbying, as compared to food and beverage companies’ $21.6 million and automobile makers’ $41.8 million. So, yes, it’s big bucks on both sides. But the biggest bucks are definitively on the side of big financial companies.

If we look at the balance over time, it used to be the case that the securities and investment industry and the automotive manufacturers were very close. For 1998, the earliest year we have data, automakers actually spent a little more on lobbying, spending $48.2 million (in 2012 dollars), accounting for 2.3 percent of all lobbying, as compared to the securities and investment industry’s $44.1 million (in 2012 dollars), or 2.2 percent of all lobbying dollars that year.

But in 2007, the auto industry dropped substantially, while the securities and investment industry, responding to the financial crisis, upped its lobbying game. The beverage industry, meanwhile, continues to lag behind both.

Additionally, as our recent analysis of Dodd-Frank rulemaking meetings logs found, Goldman Sachs had more meetings (222) with the Fed, Treasury and CFTC than anybody else in the three years since the passage of Dodd-Frank. So we know they are dogged.

Certainly, it’s hard to predict how the politics of regulating the aluminum market will go. Much depends on whether it remains a public issue (thus stoking outrage), or it quickly goes away (leaving it to those who can master the inside game, where the assault of technocratic details plus ceaseless fundraising are more important). But one thing is for certain. The securities and investment industry, and particularly Goldman Sachs, don’t just invest in commodities. They also invest in politics. Big time.

Thanks to Ben Chartoff and Alexander Furnas for their help in preparing this post.