The two presumed frontrunners, former Treasury Secretary Lawrence Summers and Fed Vice-Chair Janet Yellen, both have active rooting sections. And there's plenty of handicapping about which one is in a better position to win favor of the president — and the senators who must confirm the appointment. From our perch at Sunlight covering the political influence game, however, there appears to be one hands-down winner: 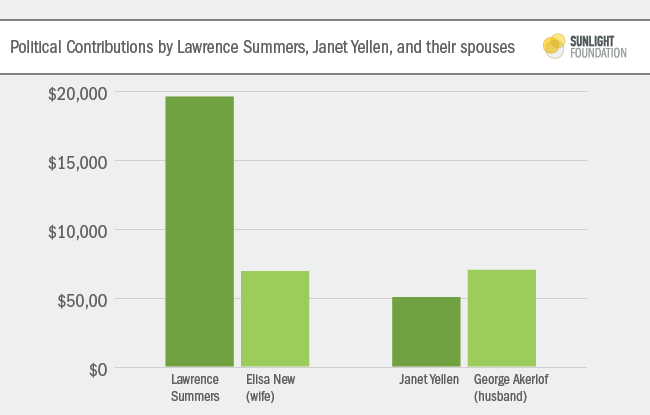 The chart above compares political campaign contributions by Summers and his wife, an English professor at Harvard, to those made by Yellen and her husband, a Nobel laureate economics professor at the University of California's Berkley campus. Although both couples have roots in academe, Team Summers has the clear lead when it comes to investments in the political class.

Of the nearly $20,000 that Summers has donated to candidates, more than $4,000 went to Obama. But Summers also gave generously to Senate candidates. A large number of contributions by Summers, who had to step down as president of Harvard University after appearing to denigrate the intellectual capacities of women, went to Democratic women senators, including Claire McCaskill of Missouri, Elizabeth Warren of Massachusetts and Jeanne Shaheen of New Hampshire.

Like her husband, Summers' wife, Elisa New, made back-to-back contributions of more than $2,000 each to Obama and Hillary Clinton in July, 2008, which suggests the couple was part of an Obama-directed effort to help his former rival for the Democratic presidential nomination retire her campaign debt. In the 2012 cycle, Summers made a combined $10,000 in contributions.

By contrast, the most recent campaign contributions by Yellen and her husband came in 2004, when both contributed to the campaign of then-Democratic presidential nominee John Kerry. The former Massachusetts senator is now Obama's secretary of state. Together, they have given less than half as much in political donations as Summers and his wife.

Both candidates have the wherewithal to make significant political donations. Summers has lucrative ties on Wall Street, including consulting contracts that the Wall Street Journal reported earlier this week with blue chip firms including Nasdaq and Citigroup.  A financial disclosure form filed in 2009, the last time Summers joined the government, also detailed a series of speaking engagements for corporate clients. Summers charged as much as $135,000 per appearance.

Yellen is likely the wealthiest member of the Fed's board of governors, the Wall Street Journal reported in 2011. Her financial disclosure form released that year put her net worth north of $5 million.