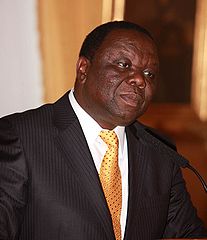 Morgan Tsvangirai may have been cheated out of yet another election against Zimbabwe strongman Robert Mugabe in Wednesday's landmark election, but a key figure in his party is ramping up his presence in Washington.

Even as the ruling party has unofficially claimed another Mugabe victory, Tsvangirai, head of the opposition party Movement for Democratic Change, called the rushed election illegal as an election watchdog group documented irregularities at the polls. Officials results are expected by Monday.

Meanwhile, the nonprofit South African Democracy Network, founded by Roy Bennett, an exiled adviser to the MDC, has hired the D.C.-based public relations firm Sanitas International. The terms of the contract have not been disclosed yet, but it was reported to the Department of Justice earlier this week and picked up by the Sunlight Foundation's foreign agent registration tracker.

The registration, required when foreign governments or politicians hire lobbyists or public relations firms to influence U.S. policy, indicates that Bennett has hired Sanitas to "build support for peaceful, free and fair elections in Zimbabwe." This includes media outreach and a "robust U.S.-based communications and government affairs program leading up and following the 2013 elections in Zimbabwe." Lobbyists for foreign politicians are required to register within 10 days of being hired.

The Sanitas lobbyists on the account include Christopher Harvin, who formerly worked in the administration of former President George W. Bush for Rep. Doug Lamborn, R-Colo., and Anne Trenolone, whose past work experience includes stints on the staff of former First Lady Laura Bush and Rep. Kay Granger, R-Texas. Granger is the chair of the House Appropriations subcommittee on State and Foreign Operations.

Tsvangirai is Zimbabwe's prime minister in an awkward power-sharing arrangement with Mugabe, worked out after the country's last presidential elections, in 2008, resulted in a bloodbath. Mugabe's government cracked down on MDC supporters and 200 people died.

Mugabe's government, a longtime international pariah, does not currently employ U.S. lobbyists. The last time it did, according to official filings, was in 2004. From 2002 to 2004, Harare had a $225,000-per year contact with Dickens & Madson, a Canadian firm. Despite the contact, the firm was paid more than $400,000 for its first year of services, according to filings.

Mugabe's goal then was to create "increased acceptance" of Harare's policies and activities. There was also a performance bonus of $20,000 if Dickens' work produced a radical change in global opinion. The bonus would come if Zimbabwe became "generally perceived internationally as being a peace loving and progressive member of the international community" by contract's end.

Other accomplishments that yielded the bonus were the removal of the pariah label and eligibility for United States African Growth and Opportunity Act, which provides incentives to African countries for opening up their economies.

The opposition, on the other hand, has been more active recently in hiring representation in the U.S. In 2009, Tsvangirai, who had recently been installed as the prime minister, hired a lobbyist to prepare for a visit to Washington where he would unsuccessfully ask President Obama to change the U.S. policy of not providing direct aid to Zimbabwe's government. But the trip did yield $73 million in indirect aid aimed at the Zimbabwean people.

That same lobbyist, Melinda Farris, was also hired in 2007 by the MDC and Bennett for a Tsvangirai visit to arrange meetings with U.S. officials and promote positive news coverage. The contract was worth $30,000.

A voice message left with Sanitas International was not returned.