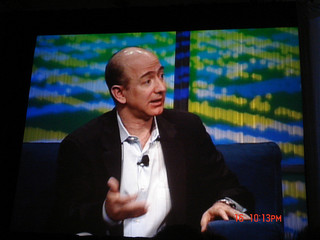 In a town where he now owns one of the biggest megaphones, Jeff Bezos has kept a low political profile.

The Amazon founder, who on Monday announced that he's buying the Washington Post, has made relatively few political contributions, most of them in the other Washington — Washington state, where he makes his home. But Bezos has made up in size what his influence profile lacks in quantity.

Last year, he gave $2.5 million to Washington United for Marriage, a group that successfully defended a state law allowing same-sex nuptials, singlehandedly underwriting one-fifth of the organization's $12.5 million budget, according to data downloaded from Influence Explorer. Other prominent political donors, including New York City Mayor Michael Bloomberg and Microsoft's Steve Ballmer and Bill and Melinda Gates, also donated to the same cause but Bezos was by far the most generous.

The digital retail tycoon made one other major contribution, of $100,000, to help defeat a proposed surtax on upper-income individuals in 2010. That same year, he gave $25,000 to Meg Whitman, a Republican and fellow Internet business leader who ran unsuccessfully for California governor. Bezos' other contributions include: $1,000 to former Washington Gov. Christine Gregoire's successful 2008 campaign and $900 to Guy Palumbo, who ran unsuccessfully last year for a Washington state Senate seat. Influence Explorer also shows earlier donations to both of his home state senators, Democrats Patty Murray and Maria Cantwell, as well as to Amazon's political action committee. He does not appear to have made any other contributions to federal candidates since 2000.

Bezos' wife, novelist MacKenzie Bezos, has been an active and eclectic donor to congressional candidates. Her beneficiaries include Cantwell, and two Republican former senators: Slade Gorton of Washington and Spencer Abraham of Michigan. Mrs. Bezos also has donated to Rep. John Conyers, D-Mich., the top-ranking Democrat on the House Judiciary Committee and one of the most liberal members of Congress.

Employees of the company Bezos founded have a distinctly Democratic tilt in their giving, Influence Explorer shows. Amazon also has been an active lobbying presence in Washington, spending more than $18 million to influence Congress mostly on Internet commerce issues.