responsible for the accuracy of any of the information within the guest blog.

Alvin Quiñones is the co-founder and director for the Center for Integrity and Public Policy (CIPP). CIPP promotes government transparency and civic engagement in Puerto Rico. He can be reached at alvin@cipp-pr.org

Late last summer, a graduate student friend of mine and I were discussing the need to bring a different dynamic to the discussion of policy and politics in Puerto Rico. Day after day, we would watch the news play out the same type of story lines, with representatives from each political party staking out opposite positions that seemed to be driven more by gang affiliation than actual analysis. The result? An audience distracted from any real discussion of the issues that affected their daily life. So we debated about how could we change this, and out of that summer conversation came a concern for the need to bring a different voice to the public.

As we attempted to gather some government data to be analyzed, we realized that information that should have been of easy access to the public was not readily available.  That is how we came upon the idea of gathering the data ourselves and opening a data platform that could be used by journalists, academic institutions, government employees and the general public to further the access to valuable information. Open Puerto Rico was born. 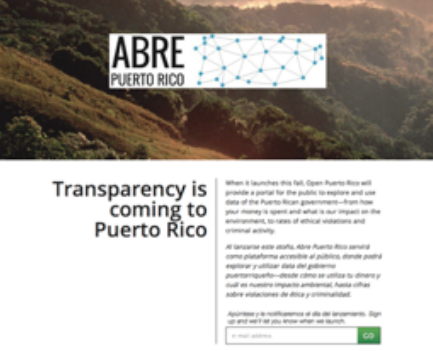 Open Puerto Rico goes beyond being just a source of accurate and objective information: it is also a tool of empowerment. How do we achieve a responsive government if the people don’t know what’s going on? How can they decide which policies to support or how to vote if they have no access to relevant information? It is also an administrative tool for decision makers in government, nonprofits, and the private business in finding the information they need.

At Open PR, we aim to create easier access to government information. Our mission is not to tell people what to think about an issue or a political party, but rather to give them the tools to draw their own conclusions with objective and accurate evidence. We also want to promote a dialogue amongst the people, to be a catalyst for communication and, ultimately, civic engagement.

Open Puerto Rico translates to Abre Puerto Rico. Abre in Spanish denotes a command to open and also the act of opening. We believe we must engage people to demand openness from the government as well as be those that open the government. Our goal is to facilitate the Puerto Rican community with the necessary information to advocate for effectiveness and transparency in our government. Under this vision, we aspire to play an active role in the revitalization of Puerto Rican democracy by promoting an informed public willing to engage in civic affairs.

DialogueTheory and IBUILDWORLDS were instrumental in providing the design of the site and initial visualization offering that will be made available (see below). NUAMS offered DKAN, a Drupal based open data management platform. This would become the foundation for us to conduct our outreach, organizing, and analysis work. 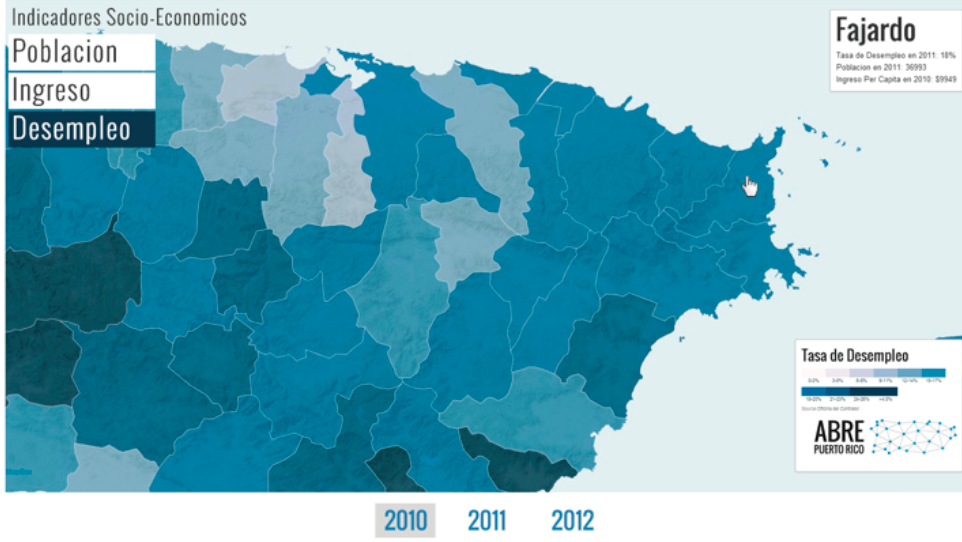 The visualizations will provide an intuitive interface for viewing interrelated data elements and compare across municipalities on the island. So far, we have been engaging with the public through our Facebook, Twitter and Instagram accounts, and we are working very hard for the launch of our website in early September.  Be sure not to miss it!

Abre Puerto Rico is one of the winners of the Sunlight Foundation OpenGov Grants. Read more about their project here.