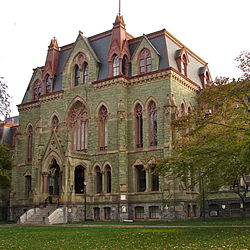 Though the fall doesn't officially start for another couple of weeks, for most Americans summer ends when school buses begin running their routes and college football broadcasts return to Saturdays. While educational institutions from kindergartens to law schools are welcoming students back, there was no summer vacation in Washington, where their lobbyists have reported spending more than $43 million lobbying Congress and the executive branch so far this year.

It's easy to understand why. Altogether, the federal government spent $47.5 billion on elementary and secondary education in 2012, the last full year for which statistics are available, plus another $12.1 billion on higher education. Those figures don't include the $112 billion in federal student loans or the billions more in research grants issued by Pentagon, the National Institutes of Health, the National Science Foundation and a host of other government agencies.

And with those federal dollars come federal strings, ranging from requirements on what foods elementary schools can serve in their cafeterias to a newly proposed government rating system for colleges and universities that would condition the availability of quick loans and aid on the performance of graduates. And that's just scratching the surface: A search of Sunlight Foundation's Docket Wrench shows that the Department of Education has more than 900 regulatory dockets, 1,400 notices, rules and proposed rules and has drawn more than 27,000 comments. And between them, the National Institutes of Health and the National Science Foundation–just two of the dozens of agencies that make research grants to universities–have more than 12,000 notices, rules and proposed rules.

Among the biggest lobbying interests so far in 2013, as compiled by the Center for Responsive Politics, are an array of organizations representing almost every aspect of higher education. There's the Association of American Medical Colleges, a trade group for teaching hospitals and accredited medical schools, most frequently lobbies on health issues, Medicare and Medicaid policies and federal budget issues. Among the top lobbying issues for Texas A&M, a public university, is agriculture. Data from InfluenceExplorer.com shows the school and its affiliated institutions receiving more than $50 million in grants from the Department of Agriculture since 2009.

Private equity firm Warburg Pincus might seem to be an unlikely member of the top spenders on education lobbying, but its Bridgepoint Education subsidiary–a publicly traded, for-profit university–lobbies on budget issues and educational aid to veterans, among other issues. A for-profit company is the biggest spender among lobbying interests focused on primary and secondary education: Edison Learning, which contracts with local districts to manage public schools, focuses all its influence efforts on education.

In addition to federal rules and federal rewards, there's another reason the education sector spends so liberally on lobbyists: Tax law bars universities and colleges, the vast majority of which are organized as charitable organizations, to have associated political action committees. Thus, the campaign contributions come from individuals–a fact that doesn't seem to have hindered educational institutions from having a large footprint in state and federal elections–education interests ranked tenth among the industries that employed contributors to campaigns in the 2012 election cycle, according to data in InfluenceExplorer.com.

Among President Barack Obama's top donors in his reelection effort, for which he raised more than $1 billion, employees of four universities–the University of California, Harvard, Stanford and Columbia–ranked among his top ten donors. Employees of the University of California combined to give more than $1.5 million, making them Obama's top donor. Overall he received $22.5 million from employees of education interests–more than six times the $3.8 million that his opponent, GOP nominee Mitt Romney, received. Other favorites included Sen. Elizabeth Warren, D-Mass., who defeated incumbent Republican Scott Brown, and former Rep. Ron Paul, R-Texas, who ran a longshot campaign to win the Republican nomination.

Don't expect the political influence spending to slow down: When Congress returns to town next week as their summer recess ends, among the biggest items on their agenda will be passing the spending bills, with their billions in funding for education.