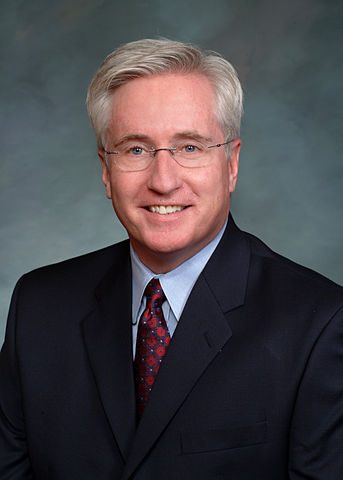 DENVER — A week before a much-watched recall election for two Colorado state legislators who voted in favor of strengthening gun restrictions last spring, the contest is attracting the kind of heavy political artillery normally reserved for national and statewide elections.

At stake in the Sept. 10 contests: the political futures of state Senate President John Morse of Colorado Springs, seen at right, and state Sen. Angela Giron of Pueblo, both Democrats. As in national elections, some of the spending is coming from so-called "501(c)4" charity groups that are not required to disclose their donors.

Political committees that do report their fundraising and spending to the Colorado Secretary of State's office show an influx of cash from out of state, largely benefiting the Democrats. A new report filed yesterday shows that Taxpayers for Responsible Democracy, an issue committee that has gotten $350,000 from New York City Mayor Michael Bloomberg and $250,000 from California-based entrepreneur Eli Broad, has served largely as a vehicle to transfer funds to the two candidates' committees: a total of $150,000 for Morse and $470,000 for Giron. There are no limits on contributions to issue committees.

MORE: Sunlight reporting on the influence and money surrounding the gun debate.

Another new group backing the Democrats in the recall race, We Can Do Better Colorado, operates an issue committee, an independent expenditure committee, and a 527. All three list Josette Jarmillo, a local AFSCME vice president, as registered agent, and are tied together by interlocking money transfers. The Democratic Legislative Campaign Committee in Washington, DC has contributed a total of $300,000 to the group and unions such as AFSCME, the AFL-CIO, and American Federation of Teachers have also provided funding. The group has produced two advertisements, one labeling the Democrats opponents as "too extreme for Colorado," and the other criticizing them as opposing abortion rights. These lines of attack have proven successful in Colorado before: both Sen. Michael Bennet and President Barack Obama emphasized these themes in their campaigns.

The National Rifle Association's Institute for Legislative Action increased its investment in a local issue committee from $108,000 to a total of $361,703 since the last report a week ago.  The money has gone largely toward advertising, including Internet, radio, billboard, and cable advertisements. Two of these advertisements, aimed at Morse, can be seen here and here on Ad Hawk. In one, Republican state Sen. Greg Brophy, who last month announced he would challenge Democratic Gov. John Hickenlooper in 2014, invokes the spectre of the New York mayor, saying, "Bloomberg personally called the governor of Colorado to get him to run these bills."  Another unnamed man says, "Bloomberg money has been pushing this entire issue from the start."

Colorado Springs and Pueblo are outside the reach of a Federal Communications Commission (FCC) policy of posting political broadcast ads online, since they are not in one of the top 50 media markets nationwide. Because of this, official reports on ad sponsors and spending is available on hard copy in file cabinets at local broadcast media offices. For groups that are do not report to the secretary of state's office, this is the only official source of information about these ads.

For example, Free Colorado, a state based nonprofit group, sponsored this ad picked up by Sunlight's Political Ad Hawk tool, which monitors YouTube and other media sources for political ads. As a nonprofit, the group is not required to disclose donations and does not report to the Colorado secretary of state office.

Both Morse and Giron have filed a cease-and-desist complaint with the cable station Xfinity over the ad. The candidates charge that an excerpt from a speech given by Morse on the Senate floor last spring was taken out of context, a matter of fierce dispute in the partisan-charged blogosphere here. Morse was paraphrasing from a speech by Robert F. Kennedy when he used the phrase "sickness in our souls" to describe waves of violence. The Free Colorado ad charges that Morse was using the phrase to refer to Colorado gun owners.

In June, at a Freedom Rally sponsored by the group, Colorado-based Magpul Industries, a firearms and accessories manufacturer, gave away 1,500 30-round Magpul magazines before the new state limit on magazines went into effect. The company also created this print ad riffing on the Berlin Airlift of the 1940s–though the "air drop" here was ammunition magazines, not food supplies.

Americans for Prosperity, the Koch-backed advocacy group that spent more than $33 million on the federal level in the 2012 elections, and also is not required to disclose its donors, has also gotten involved in the recall races. The group has been distributing this door hanger, which criticizes Morse not about his stance on guns but for his support of the Obama health care law.

VoteVets.org has produced this ad in favor of Morse, highlighting his pro-veteran record–without mention of the gun issue–an important constituency in Colorado Springs, the home of the Air Force Academy. VoteVets.org is a national organization, with both a 501(c)4 advocacy arm and a Political Action Committee (PAC). The 501(c)4 is not required to disclose its donors.

Ad Hawk also picked up this anti-Morse ad by the National Association for Gun Rights (NAGR), another national group organized as a 501(c)4 advocacy group, as well as an ad in favor of the Senate president by Americans for Responsible Solutions, a super PAC launched by former Rep. Gabrielle Giffords, an Arizona Democrat who herself was a victim of gun violence.

As the site of two of the nation's worst mass shootings, in 2012 at an Aurora movie theatre and in 1999 at Columbine high school, Colorado has been a locus for advocacy on both sides of the gun issue. Last spring, the legislature approved and Hickenlooper signed a sweeping package of gun law changes that applied limits to ammunition magazines and extended background checks. Colorado was one of the few states to pass stricter gun laws in the wake of the shootings in December 2012 at Sandy Hook elementary school in Newtown. Pro-gun groups have made it clear from the start that they would challenge the legislators backing the stricter gun laws at the ballot box.