If you think the $6 billion spent during the last election cycle on federal races was a lot, consider this: Another $1.4 billion that up until now was nearly impossible to total up on a national level flowed into campaigns through political committees that don't report to the Federal Election Commission because they operate only at the state level.

That's more than the $1.2 billion traditional PACs–the kind that give directly to candidates–collected at the federal level. And it reflects giving in just 23 states, those included in a new Sunlight Foundation analysis of data compiled by the National Institute on Money in State Politics.

The biggest donors include labor unions, corporations, political committees and individuals. Some, like the AFL-CIO and Chevron Corp., are major players at the national level, while others, like the California Health Foundation & Trust, a nonprofit associated with the California Hospital Association and Charles Munger Jr., son of mogul Warren Buffet's longtime Berkshire Hathaway collaborator, focus their giving on the state level.

This analysis included more than 7.2 million contribution records available for the 14 selected states that either have no contribution limits or allow direct corporate or labor union contributions to PACs, plus nine states for which data was easily available. The data can be downloaded below.

It provides an overview of information that up until now was accessible piecemeal, by searching through the individual web sites maintained by state government election authorities. So while the contributions of a big donor like Harold Simmons to state candidates, parties and committees intervening on ballot initiatives could be easily found in the data the National Institute on Money in State Politics provides and that Sunlight makes available on InfluenceExplorer.com, the $1 million he gave to Texans for Lawsuit Reform this past election cycle could be found only on the website of the Texas Ethics Commission.

The Sunlight Foundation's analysis shows that:

States with no campaign contribution limits

Utah, one of the four states that allow unlimited contributions by corporations and labor unions to PACs, is unique in having more individuals among its big donors than corporations, trade associations, labor groups and other organizations. There are as many as ten individuals or couples among their major donors in the last cycle. Members of the family of Jon Huntsman, the former governor and failed candidate for the 2012 Republican presidential nomination, lead the list. Huntsman's family members gave to Horizon PAC, which was started by Huntsman’s staff well before he threw his hat in the presidential ring. New York-based philanthropists Herbert and Jeanne Siegel gave a total of $400,000 to Horizon PAC. For 2013, Huntsman has a new Utah PAC, called the Red Rock PAC, which aims to elect other Republicans who share Huntsman's politics. Red Rock has brought in only about $75,000 so far.

Huntsman was not the only presidential candidate taking advantage of states with no contribution limits. The winner of the Republican presidential nomination, former Massachusetts Gov. Mitt Romney, took advantage of Alabama’s laws to raise unlimited funds and received more than $440,000 which was then transferred to the PAC's Boston office. The money is also often used to support local candidates who pledged their support to Romney's primary efforts.

In Missouri, multi-millionaire Rex Sinquefield has given more than $3.3 million to PACs. Before retiring in 2005, Sinquefield headed Dimensional Fund Advisors which manages some $200 billion in assets. He now devotes his time and his fortune to public policy issues, including education and taxes. In the last election he contributed more than $2.5 million to Let Voters Decide, which sought to repeal the income tax in Missouri and replace it with a seven percent sales tax. More recently he filed a lawsuit against a group wanting to bring back campaign finance limits in Missouri. Prior to 2005, when Missouri had fixed limits on contributions, Sinquefield created some 100 state PACs to get around the regulation. 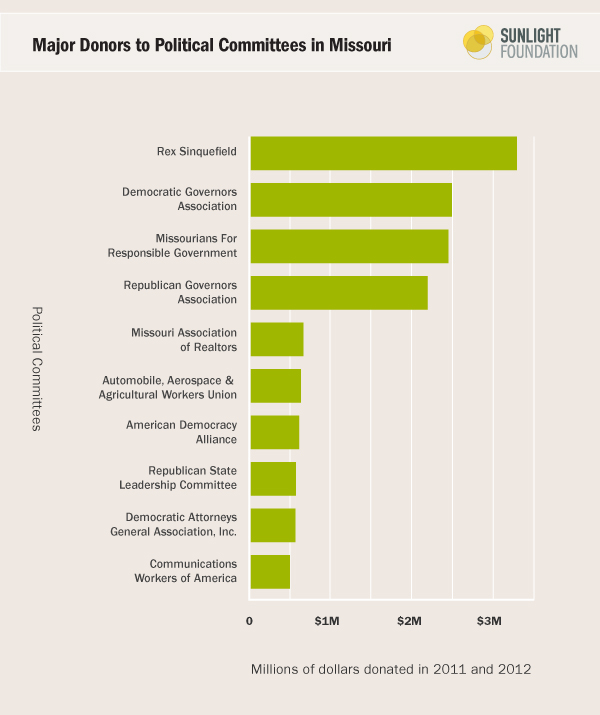 In Virginia, the PAC associated with the scandal-plagued Gov. Bob McDonnell was one of the largest recipients of campaign cash in big denominations. One of the main contributors to the Opportunity Virginia PAC, giving $150,000 was Pennsylvania-based Consol Energy. The company gave money to McDonnell’s PAC in 2011 and 2012, more than two years after his election in a state where governors are limited to one term.

Virginia’s first lady used some of the PAC’s money for a shopping spree, according to the Washington Post. Although not illegal under the state's laws, it comes at a time when the McDonnell is already being investigated by federal officials for possible ethics violations for not disclosing several gifts including a Rolex watch he received from a Florida-based pharmaceutical company, Star Scientific.

Another controversy, one that more directly involves Consol Energy, involves the Virginia Attorney General Ken Cuccinelli, a Republican running to succeed McDonnell. A U.S. magistrate overseeing a civil suit expressed dismay over an email trail between an assistant in Cuccinelli's office and lawyers for Consol engaged in a civil suit against Virginia landowners over natural gas rights that suggested Cuccinelli's office was advising Consol. The energy company has doled out $111,000 to support Cuccinelli, including an $11,000 in-kind contribution. 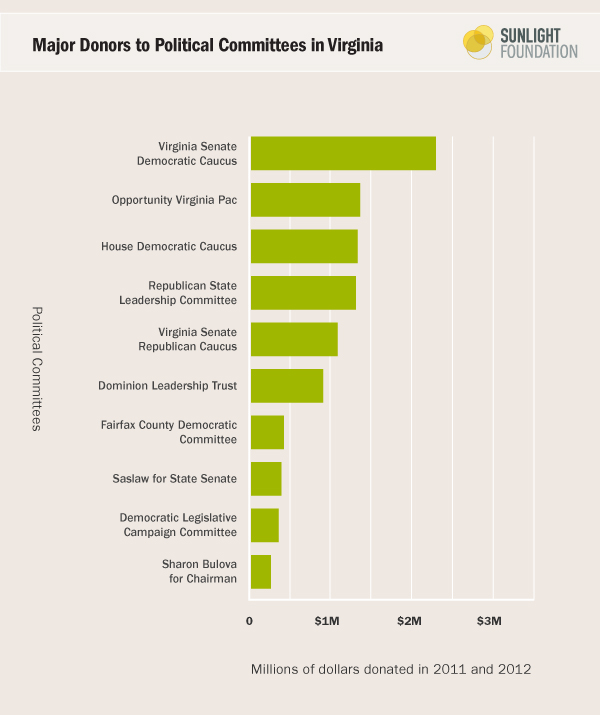 Even where states have some limits on who can contribute to state political committees and how much, big money gets in. In California, committees can take corporate contributions up to $6,000. But the limits don't apply if they're making ad buys to influence a ballot initiative or to promote or attack a politician, rather than contribute to one. That rule was in place even before Citizens United. Among the biggest donors to California state PACs are the California Health Foundation & Trust and the California Correctional Peace Officers Association.

Florida, meanwhile, recently raised the contribution limits to $1,000 for legislative candidates and $3,000 to candidates for statewide offices. Among big donors to state level PACs, formerly called "committees of continuous existence" in the Sunshine State, is the Florida Gaming Center, which donated more than $3.5 million to Floridians For a Level Playing Field, an issue-based PAC backing a new casino in downtown Miami. The Florida Association of Realtors Advocacy Fund gave $2.2 million to Taxpayers First PAC, which tackles foreclosures and property taxes in the state.

Among the biggest donors across the states surveyed so far, labor groups stand apart; they've donated more than $111 million. At the very top are some of the major federal players including the National Education Association ($10 million), the Service Employees International Union ($7.5 million) and the AFL-CIO ($7.04 million).

More than 2,500 labor groups including local chapters were politically active in the past two years across the 23 states. In California, for example, the NEA gave more than $10,000 to the Gay and Lesbian Voctory Fund in California. We Are Wisconsin PAC–an issue based committee actively involved in the effort to recall Republican Gov. Scott Walker, whose budget bill eliminated collective bargaining for public employee unions, received more than $14.43 million from labor during the cycle.

Click here for the raw data for all donations above $100 in the 23 states as a CSV download and here for donors giving more than $1 million. For best results, download the text file and import into a database manager such as Excel. If using data for only one state filter on the "Filerstate" field.

If aggregating numbers please keep in mind that all rows identified as "Non-Contributions" in the field titled "Sector" should be omitted. Also, the data has not been completely standardized yet, so if aggregating the data by the "Name" field or the "Standardizedname" field users must eyeball the data to make sure to include all versions of the donor names.